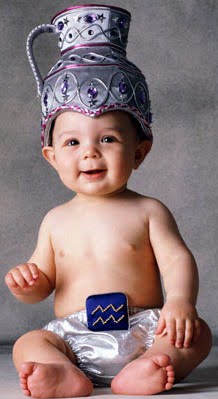 An Aquarius child is a sort of puzzle for his parents. He is sensitive, adamant, a little shaky, ingenious and impulsive, all at the same time. It becomes a little difficult to decide whether he is an extremely crazy youngster or an exceedingly intelligent prodigy. He may turn out to be the next Einstein or become an ordinary salesman at a departmental store. However, his future depends much upon how you shape his personality. Don’t try to force your opinions on an Aquarian baby; he will vehemently oppose them.

Just give him sometime and let him think over it, mostly probably he will find it correct and accept it in the end. You will hardly find his behavior predictable. From a usually calm and pleasant individual, he can suddenly turn into a stubborn and restless one. Inconsistencies and contradictions rule his characteristics profile. Aquarius children may not know where to go, but they always know which road to take. They demand logic behind every action and their personality traits reflect a blend of common sense and perception.

They have a large number of friends and love to help their friends whenever they can. Your Aquarian child loves to chase dreams. No sooner will one be over that he will be chasing another one. Somehow, he never dreams what the other children dream of. For instance, he will never think about becoming a doctor, rather he will want to be an oceanographer. Even though he may have to settle down with the former, he will never forget the latter one and may even make it come true one day.

Aquarians tend to be absent minded and this may result in quite a few accidents. Even at school, your Aquarian child may always be pointed out for not paying much attention. However, this will be supported by good grades, more often than not. On one hand, he has a good intuition and this helps him in arriving at the solution even before he has fully heard the problem. On the other hand, he tends to forget things like his home address way too often. He will have unusually intelligent thoughts every now and then, but they will not be in a logical sequence.

You will have to teach your Aquarius baby to compile his thoughts in a proper order, so that they make sense. In the contrary, his genius would either go waste or it may lead to some eccentricity. He will not be too enthusiastic about sports, infact any kind of physical activity. Mentally, he will be thousand miles away from the other children in a jiffy. Nature will attract him and he will feel one with it. Aquarius children have a very sharp sixth sense and they can easily absorb the negative vibrations around them. This may lead to a disturbance in their emotional balance and break their usual tranquility and harmony.

Encourage, don’t force, them to do something. Before saying anything to an Aquarius child, measure your words carefully. They may make a lasting impression on his personality. He will have lots of friends, but romance is something he will take time to understand. Still, he loves people and tries to help them in every possible way he can. Do you think he dreams too much and too far ahead? His dreams are tomorrow’s reality. Just believe in them and one day, you will see him making those things others could never even think of!