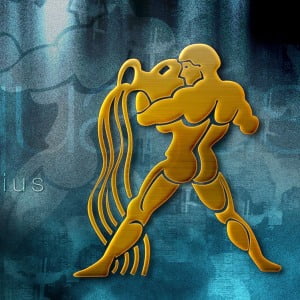 It seems that the psychology of the masculine combines very well with Aquarius to bring out the intellectual bias of the sign. So the epitome of the Aquarian male is the thinker, the dreamer, the philosopher, the scientist. Also, the problem men in our society have confronting emotional situations generally is aggravated in Aquarius. Aquarian women, while they don’t handle their own emotions very well, are usually at least aware of them. But no one is more out of touch with his own feeling nature than the typical Aquarian male.

So the Aquarian male is often one of the most infuriating people you will ever meet when it comes to relationships. First of all, the coolness has a lot of pride. Control of emotion is a big thing for Aquarius. No matter how much he’s hurting, unless he’s about to have a breakdown, he will often not grant you the satisfaction of knowing about it.

Another problem he’s got is that he often sees emotion as a demand. Remember the Aquarian is very big on the idea of freedom. This is often carried to outlandish extremes in personal relationships. Typical of it is the Aquarian man who refuses to tell you what day and time you’ll see him again – because he doesn’t ‘believe’ in time. Or the Aquarian man who ‘believes’ in open relationships, and tells you truthfully (because he believes in truth, and feels everything should be open between you) about the three other lovers you have to compete with. Not that you asked. It’s just that he believes in truth, and doesn’t understand why you should be hurt and make a scene. It’s unreasonable and possessive, and you shouldn’t be so self-centred. Everybody, he will tell you, benefits from it. Shouldn’t we all love each other? If you love him, you should love his other girlfriends, because they love him too, and he…Well, you know the story. It can make even the most tolerant lover develop homicidal instincts.

You may have the sort of Aquarian who simply refuses to discuss personal feelings. Or he may tell you you’re being very ‘heavy’ and too emotional. The problem is, he’s often grossly hypocritical about all this. When the tables are turned on him, he’s capable of behaving as much like Othello as any Scorpio is. But he won’t be as honest about it, because he’ll drag in things like honesty and loyalty and other concepts which damn your behaviour without conceding that the real root of his upset is his feelings, not his principles.

The only way to deal with this kind of Aquarian is to out-Aquarian him. That means challenging his beliefs, so that he can find out whether he really believes in them or not. If it means being a little unpredictable yourself, or requesting your own freedom of behaviour. Remember that this is a fixed sign. Fixed signs aren’t adaptable; they don’t adjust easily to other people. They have their own world, their own values. They don’t like being pushed. That reforming instinct in Aquarius simply doesn’t apply when you try to reform him. You’ve got to have a good deal of your own detachment, and some source of creative life of your own, if you want to make a relationship work with an Aquarian. He’s not prepared to put that much into relationships on an emotional level. You simply have to get used to it, and learn to read his signals, not his words. A good deal of the time, what Aquarian says about his feelings should not be taken literally. You can take his word for it on his ideological views, or his special subject of study. He’s pretty reliable there, and usually knows what he’s doing. About his own emotions he usually knows very little. Learn to use your instincts, and learn a little telepathy. But don’t expect an honest expression; you’ll get what he calls honesty, which usually has nothing to do with it, because in this realm he isn’t very honest with himself.

On the other hand, expect a good deal of unconscious emotional dependency. That independent spirit, with his mental mind in the clouds and his eyes on the future, is more sensitive than he can ever know. He’s terribly vulnerable emotionally, rather childlike, which is why he takes such great pains to mask his emotions from everybody including himself. He would consider it weakness. If you need overt displays of it, avoid Aquarius. If you’re confident enough in yourself to know you’re worth loving, and can appreciate the friendship this man offers, you’re fine. And who knows? You may even reform him, within reason.