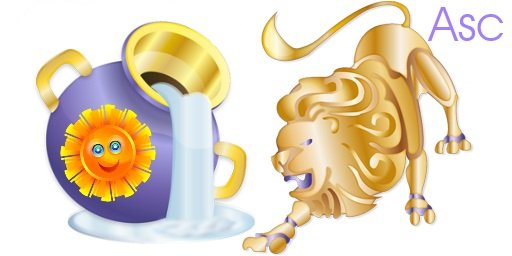 With a robust demeanor and a striking appearance, an attention-getting Leo personality leaves a big impression all by itself, so Aquarians with Leo rising need to put their “best foot forward” to rally support and inspire confidence. Friendly and magnetic triumphs over sour and disagreeable every time, but look-at-me Leo ups the ante tremendously. These people are usually so full of stage presence that they love drama and might well be involved in theater, stand-up comedy, or other performing arts. A fondness for jewelry or other ornamentation is also common. But attitude is everything! They need to avoid being defensive and taking themselves and life too seriously. They’re energetic and confident, but they still feel challenged from the moment they wake up in the morning. When they face the world with a brusque and snarly attitude because they expect a battle before breakfast, they’ll almost always get one. It’s a self-fulfilling prophecy. If they want some enjoyable companionship, as sundown births usually do, they need to stop opposing everyone who rings the doorbell. Better that they emphasize their more charming traits that keep people coming back for more. [..]

Finally, Lordly Leo the lion brings a fearlessness to these emergency-prone Aquarians that makes them bold and confident in the face of danger. Their behavior can be downright heroic. But they need to avoid succumbing to a “daredevil syndrome” that puts them in dangerous situations unnecessarily. A long life surrounded by family and friends is more likely with a dose of common sense—and, of course, a good attitude!