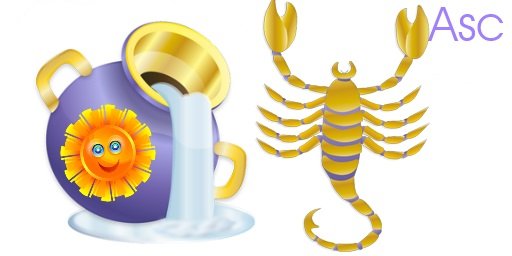 With an intense, Mysterious Scorpio personality and an on-guard alertness, these people are always vigilant, on their toes, and ready for anything. They show up full of purpose and generally have a “come hell or high water” attitude. They’re not very tolerant, but when Aquarians born around midnight channel their energy in positive directions, they’re able to move mountains. There’s a lot of motivation here and a “grab the handle” eight-cylinder gusto to match. No one ever accused these people of being lazy! And they keep their cool in emergencies because they’re always convinced the crap is going to hit the fan. Scorpio’s handiness coupled with Aquarius’ technological prowess usually produces some high-tech wizardry, and with Scorpio’s eye in the back of the head and Aquarius’ intuition, they come up with some remarkable insights. It’s hard to hide from these people! They usually have jobs that facilitate the use of these skills. Whether they’re computer programmers, back-room researchers, Inspector Gadget types, or whiz kid engineers, they consider every possibility and investigate every angle, leaving no stone unturned. And they probably have a computer in the spare bedroom that they use to surf the Internet for their own amusement. Aquarians with Scorpio rising who haven’t discovered the information superhighway should give it a shot; there’s an aptitude for it that may be untapped.

Also, any uptight Aquarius needs to avoid being overly suspicious, and a Scorpio personality is usually just that. Cautious vigilance in potentially dangerous situations is one thing, but suspicion around-the-clock is nothing more than paranoia. These Aquarians need to trust their plugged-in, emergency-prepared Aquarius intuition and their always investigative Scorpio insight. There’s no reason for these people to be constantly glancing over their shoulders—if there’s trouble brewing, they’ll spot it a mile off. If they’ll think positive, be objective, and charge full-steam-ahead, they’ll be more successful than they ever dreamed.