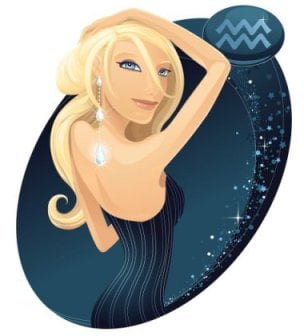 There are two types of Aquarian women. Both share all the basic Aquarian qualities of strength, independence, original thought. One type turns the immense self-discipline and dedication of the sign into a purely personal sphere. The other goes out into the world, to try her muscle in society. Either way, this is no helpless, malleable creature. Her self-sacrifice is wholly self-motivated, and due to her own ideals, not your wishes.

Many Aquarian women find that the sphere of home and family is insufficient to exercise their intellectual abilities and interest in the larger group. So you find numerous Aquarian women in the political and helping fields, combining their wide-ranging ideas and spirit for concern for others with their innate femaleness. The typical profession here is the social worker or psychologist. Also the teacher and educator. Remember that it may be Aquarius on the ascendant that we are talking about here. But wherever you find this woman in professional life, she will be motivated by her ideals.

As you might expect, Aquarius is not a sign that is exactly conducive to sexual role-playing in relationships. In fact, many Aquarian women are intensely dedicated to the Women’s Movement, for it is a natural to the sign. The logic and necessity of it is obvious to Aquarius, where it might not be to the more personal-oriented signs like Cancer, Taurus or Virgo. A great many Aquarian women must, at some point in their lives, become involve with a cause of some kind, even if it concerns only the three families on the street they live in. And this kind of dedication to a cause brings the best out of the sign.

It’s a little more difficult on an emotional level. Aquarian women sometimes has as much difficulty as Aquarian men in expressing feeling. Sometimes it’s recognized but held in – and you get a kind of stiffness, a rigidity, a stiff-necked pride. Sometimes the emotions are completely unconscious, and then you see an appearance of coldness, remoteness, aloofness in personal relationships. The ‘don’t tie me down syndrome’ is as typical of the Aquarian woman as it is of the Aquarian man. Because of the resentment toward role-playing, there is also a great liberality in sexual behaviour often in evidence in Aquarian women. These are the women who are much more likely to recognize frankly their own bisexuality, their need for more than one relationship, their need for purely sexual affairs and escapades outside marriage. Aquarius is a masculine sign; it combines with more or less grace with feminine psychology, either in a true marriage which produces the gifted thinker who also has a heart, or in an uneasy conjoining where you have a woman who is basically embarrassed by her own femaleness. This can often be a problem with the Aquarian woman; ‘female’ sometimes seem to her to mean weakness, emotionalism, or the victim of masculine domination and suppression. Not an easy sign for a woman to carry, and get it right. But with effort, you have the woman who can be both man and woman, true to her own female self yet with a strong masculine quality that allows her to concern herself with issues beyond her own personal satisfaction.

From all this, it will be obvious that Aquarius is not the woman to choose if you want, (a) the devoted and silent helpmeet who will adore you and listen uncritically to everything you say, or (b) the domestic creature who is only interested in you, your meals, your work, your children, and your cleaning and ironing. On the other hand, for those who are genuinely able to accept women as people, Aquarius can be an inspiring companion and helpmeet and friend, as well as a person in her own right. From this angle, the Age of Aquarius has a lot to do with the Women’s Movement – and no sign is closer to the vanguard of the movement than Aquarius, in both its more violent and its more reasonable manifestations. And whatever you have to complain about in the Aquarian woman – whether it is her rigidity, her dedication to her own principles, her stubbornness, her detachment¸ or her refusal to regard her loved one as the penultimate hero, you must admit that this woman is interested and interesting. Men who are afraid of intelligent women should stay away.