They began the verse, but they never finished it … 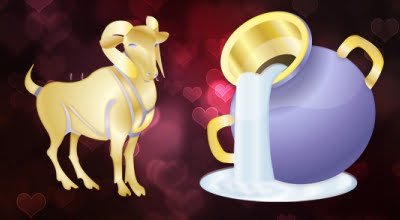 Aries and Aquarius have this outstanding thing in common – they’re both cur¬iously attracted to anything new until they’ve extracted all the fun and truth from it. Then they toss it away and go on to the next new and exciting adven¬ture. With these two, there is no looking back and sniffling over the past, if they’re both typical oftheir Sun Signs. To the Ram, today is ever so much more thrilling than yesterday. To the Aquarian Water Bearer, tomorrow is a thou¬sand times more fantastic than either yesterday or today.

Once in a while, they slip off the time track separately, somewhere between the past, present, and future, and bump smack into each other, in a meeting that isn’t part of the conscious itinerary of either. It’s always an interesting en¬counter, and a fated one, planned on a higher level, long before both of them were born. Aries and Aquarius are influenced by the 3-11 Sun Sign vibration, and a blending of their auras brings them into the shared experiences of travel, education, and spiritual discovery – along with karmic memories from former reincarnations, as well as the hopes, wishes, and dreams of the present existence. You can see why they don’t find each other lacking in fascination.

Aries people throw themselves into things with total commitment (for the moment), enthusiastically and fully involved in what’s happening. Aquarius is equally as enthusiastic, but these people don’t throw themselves into anything. The Water Bearers approach every experience with a studied detachment, snoop around, scratch their heads, and wiggle their ears – from a safe distance. That way they can enjoy it without getting either tangled up or tied down. Of course this subtle psychological difference won’t help you tell them apart when you pass them on the street. But there are other ways.

The Ram may be running, with head bent forward, showering confetti and sending up rocket flares. The Aquarian may be riding a unicycle, munching on a 146 pickled radish, and spinning a hula hoop, with a friendly quetzal perched on one shoulder. They both stand out in a crowd.

One of the meanings of the 3-11 vibration between friends, relatives, busi¬ness associates, lovers, or mates is: karmic obligation. The association or rela¬tionship involves either some great blessing and good exchanged – or some great sadness brought from one to the other, perhaps in the form of an obliga¬tion or responsibility, far-reaching in its effect on the lives of both.

An Aquarian blessed with an Aries friend who stands by him (or her) through long months of trouble or illness (either personal or in the family), when no one else cares or helps …. may wonder, “Why did she (or he) do it?” The Ram is simply repaying a favor from a long ago Lifetime (buried in the sub¬conscious) of similar help received. Perhaps in the process, the Ram receives an enlightenment, starting the Aries person on the road to a future career, some unexpected goal or dream that wouldn’t have been revealed in any other way, save through the circumstances of the Ram’s offering help to the Aquarian. In reversing the signs, the same situation may develop, with many variations on the theme.

Another Aquarian handles the business affairs of an Aires, keeping the Ram out of trouble with taxes and creditors, smoothing out financial wrinkles, and arranging miraculous loans under impossible conditions – unconsciously moti-vated by the soul memory of monetary assistance received from Aries in another time, another place – and a karmic debt is repaid. An Aries man has a close male friend whose Aquarian wife frowns on the friendship. She is illogically sus¬picious of the Ram, and he, in turn, feels an inexplicable tension when she en¬ters the room. It could result in the Ram breaking up his friend’s marriage to the Aquarian – or with the Aquarian wife preventing the Aries from continuing a valued friendship with her husband. How it ends depends upon the degree of evolvement of the Ram and the Water Bearer at the time of the situation. Kar¬ma is complicated.

The good or evil these two Sun Signs (or any two Signs influenced by the 3¬11 vibration) bring to each other is seldom minor. The contact is not casual, and they have little conscious control over its outcome. Yet, if Aries and Aquarius will meditate on the laws of Karma, or reincarnation, they’ll understand why one of them is so willing to aid the other, and learn to accept the favor graceful¬ly. Or, they’ll comprehend the reverse situation – why the two of them contin¬ue to senselessly hurt one another – and through understanding, be able to end the karmic pattern by the simple Karma-canceling act of forgiving and forget¬ting. Otherwise, they’re only stacking up additional obligations for future lives, wherein their two souls will be chained together, in an endless succession of close relationships, through the inevitable law of magnetic attraction and repul¬sion, action and reaction.

Aquarius is one of the four “human signs” in the astrological circle, the oth¬er three being Gemini, Virgo, and Libra (unless one counts the Centaur – half¬horse, half-human Sag). Consequently, Aquarian passions are more controlled than those of the Rams, whose instinctive loves and hates often cause them to act from sheer animal urge, or personal gratification of the ego. The Uranus¬ruled Aquarians more often flee from instinctive action into the realms of the higher mind – and the domain of pure intuition. This gives the Water Bearers an uncanny psychic or intuitive ability.

Sometimes Rams will also appear to be psychic, but they’re really not, in the true sense of the word. It’s only because they plunge straight into the heart of the situation, and the penetrating action of their ruling planet, Mars, gives them the correct answer. Aries goes directly and immediately to the core of the problem, using neither logic nor rational reasoning, simply being obsessed with an overwhelming need to leap in and get to the bottom of the thing. The swifter, more intricate flashes of Aquarians emanate from the electro-magnetic wave lengths they’re tuned into under the influence of their ruling planet, Ura¬nus – which symbolizes electricity, among other things …. and lightning, too. The Water Bearers merely grab an impression out of the air, or absorb it through some sort of electrical osmosis, without expending a tenth of the energy put forth by Aries to reach the same conclusions.

Aries and Aquarius are essentially compatible. There’s an almost visible cord of understanding running between them, so that even when they strongly disagree, it’s always possible to replace tension with harmony anytime they choose to do so. It’s the natural sympathy between Fire and Air, and it’s some¬thing else. It’s the normally easy (barring unusual planetary afflictions between the horoscopes), effortless possibilities of communication open to all 3-11 Sun Sign Patterns, on all channels. The third astrological house symbolizes commu¬nication of all kinds – visual, through the printed word – and also through the spoken word, including minds speaking to minds, hearts speaking to hearts.

Rams are frequently accused of being naive, impractical dreamers. Aquar¬ians are frequently accused of being just plain crazy. That’s another reason why these two usually get along so well. They both feel misunderstood by the world and everyone in it. They also both feel they’re on the right track, separately or in unison, and it’s the rest of the world that’s out of step and off-center. Natu¬rally, this draws them together – for mutual comfort and mutual protection against the establishment. The Rams are reckless, the Water Bearers are pixi¬lated – but they manage to spin these qualities into complicated webs of lepre¬chauns, miracles, rainbows, and assorted magics, creating dirigibles of dreams which, surprisingly enough to more sensible souls, take off into the blue skies of some wildly successful personal and business ventures.

The Aquarian, Uranus-inspired tolerance insulates most Water Bearers against the shock of the sudden whims and highly original, creative urges of Aries. There will be times when the Rams believe Aquarius doesn’t quite have it together, and when Aquarius will despair of being able to cope with the hot tem¬per flashes of Mars. Yet generally, these two should enjoy a mad, fabulous, and unique association. Aquarius is a Fixed Sign, and so, on occasion, the Water Bearers can be more than a little stubborn. But stubbornness won’t work with Aries. Only love and kindness. Great gobs of it.

The Water Bearers may attempt to enlighten the Rams with their theories about submerging the ego, claiming this brings peace and happiness. But to Aries, submerging the ego is scary, quite like being swallowed in a dark tunnel. “Where does that leave me? Where will I be, the Me-of-Me … in some kind of eternal void?” the Ram wonders. Arians are never strong on the yoga state of Nirvana. To become unconscious of yourself – that’s ecstasy? In this instinct, Aries is intuitively right.

The concepts of Aquarius are light-years ahead of their time, for the most part, yet no more infallible or immune from misjudgment than the ideas of Aries – although the Uranian wisdom will be poured out from the little brown jug of Aquarius anyway, solicited or not. “All human troubles stem from an overemphasis on the emotions and an exaggeration of personal feeling,” claims Aquarius.

“People who deny their emotions and bury their personal feelings are cold and heartless, lacking all enlightenment and perception,” retorts Aries.

So – where do they go from such a dead-end street? Back to their lepre¬chauns, miracles, rainbows … and dirigibles of dreams.