… but of course neither of them understood the other’s language. 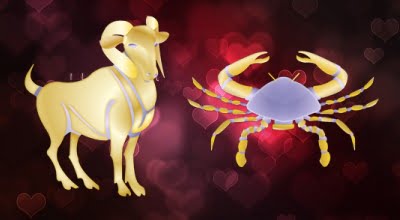 A Crab can become a little tense and edgy, spinning around on an Aries carousel. Because the Lunar physical-emotional metabolism is more delicate and fluctuating, Rams can exhaust Moon people with their excessive Mars enthusi-asm, which flames in even the quieter, Sheep-type Arians, on occasion (and re-member that the Sheep types are in the minority). Consequently, to the deter-mined, somewhat reckless Ram, it may frequently seem as though the Crab disapproves of his (or her) behavior. What do these Cancerians expect you to do, wonders Aries – bury your confidence and develop an inferiority complex, just to please them? Not necessarily. True, the Crabs might feel considerably more comfortable if the impulsive Mars rhythms could be slowed down a bit, to match their own, more cautious calliope music. But it won’t benefit the basic insecurity of Cancer to have Aries join him (or her) in wailing “nobody-loves-me-everybody-hates-me-let’s-go-eat-worms.” One weepy hang-up like that is sufficient in an association ora relationship. Why try for two?

Very few people are aware of how frantically Aries men and women (and children) seek acceptance while they’re rushing around feverishly courting rejection with their impulsive, thoughtless ways. Among those few aware ones are Cancerians, who themselves are abnormally sensitive to hurt. Even as they appear to frown on Aries rashness, they sense, with their acute perception, that the Rams are not always as tough as they act. Because of this perception, there can be some lovely and solid relationships between these two Sun Signs. However, since theirs is a 4-10 vibrational pattern, this association more often occurs in an unavoidable career, business or family situation, than in a romantic one. The Higher Selves of any two people influenced by the 4-10 vibration may possibly arrange matters this way, because of the heavier Karma, which must be leveled and harmonized, and human nature being as it is, few people would choose the tensions and conflicts of a 4-10 soul testing if there was a choice. Naturally, there are also love and marriage involvements between Aries and Cancer, from time to time. It’s just that the Ram and the Crab teams are more often found as relatives or co-workers – in a boss-employee or other career entanglement. Even those Rams and Crabs who are romantically attracted will usually first meet in a career or family atmosphere, or these matters will be a main topic of conversation between them initially.

If the Sun-Moon aspect between their natal charts is harmonious, this combination can be surprisingly financially successful and emotionally compatible. But if a negative Luminary or Ascendent aspect exists between their horoscopes, there will be some steep hills to climb, and much soul testing for durability.

Aries likes – and needs – to win. Aries also enjoys leading. Now, Cancer has nothing against either winning or leading. As for the latter, remember that Cancer is a Cardinal Sign of leadership, despite the Crab’s attempt to hide his or her desire to lead beneath a veil of feigned unconcern. Aries is also a Cardinal Sign, and the Ram’s horns being equally as tough as the Crab’s shell, you can see there may be a few skirmishes over who follows the leader in any game they’re playing. It’s a tricky problem, because when you have two leaders, how do you determine which one will follow? (Especially when neither has any intention of doing so.) It seems like an impossible situation, but there is a solution. They can walk side-by-side, with no one ahead, no one behind. It’s called compromise. Cancer tends to compromise with less pain than Aries, so it’s usually the Crab who must initiate the offer of truce between them. Aries may try, yet somehow manage to say the wrong thing, in the wrong way, tinged with too much ego, which leaves the Crab either snapping angrily, or weeping inconsolably.

All right, so now we have them (we hope) walking side-by-side toward the winner’s circle – peacefully, for a while – then up pop the differences between their personalities and strategies again. The Crab advances in a rather zigzag direction, never straight ahead, like the direct, straightforward Ram. The Cancerian approach to anything is deliberate, disguised and careful, never mind how many jokes they tell along the way to distract you from noticing their techniques. Whereas the Ram is ever ready to discard dead wood and clear the decks for action, the Crab wants to be sure that no one throws out the baby with the bath water, so to speak. That’s admittedly a mixed metaphor, but when discussing and describing Aries and Cancer, it’s permissible. No single metaphor, analogy or allegory would suffice to fit both of these divergent Earthlings, who often seem to each other to be from different stars or galaxies.

Life is one huge challenging contest to Aries, who rushes out to meet obstacles headlong and headfirst, even when he or she must go out of his or her way to find them. If they aren’t there, Aries will create a few, for what fun is a contest with no obstacles to overcome?

Indeed, obstacles attract Aries like bar magnets. Meeting with constant agreement everywhere both annoys and bores a Ram. Aries is either dismayed or furious when another person refuses to fight or argue. That takes all the excitement out of it. The Mars adrenalin surges, the Aries vitality is instantly re-charged, in the face of any sort of opposition. Let a conflict loom on the horizon, and the Ram is in his or her glory, bravely facing the thrill of challenge, and the explosive excitement of meeting it victoriously. There’s nothing wrong with this, as long as Aries will stop once in a while to notice that there are other people in the world besides himself (or herself) and that they have feelings too. Aries people don’t mean to step on anyone’s sensitive feelings, but they’re so intent on getting wherever it is they’re going (and you can include the rare and more introverted Sheep types, along with the flashier Rams) that they can be inconsiderate and thoughtless without realizing it. Excluding those few
Arians who may have a severely afflicted natal Sun or Mars, the typical Ram would never hurt anyone on purpose. Nevertheless, he (or she) does, especially the ultra-sensitive Crabs.

By now, you can see that one of the problems between Aries and Cancer is sensitivity to hurt. Aries people have little or no awareness of this particular weakness in themselves – it clashes with their self image of strength. Therefore, when Aries is hurt, the Mars-influenced reaction is to either immediately deny it, or to become defensively angry. Cancer’s vulnerability is carefully hidden, so the typical Cancerian reaction to hurt is to crawl inside the Crab shell and pout – or turn just plain crabby. If the wound is deep enough, either of these responses may be accompanied by a few buckets of tears and sometimes, the Lunar sensitivity peeks out from behind the Looney-Bird humor. When these two have hurt each other, one of them (Cancer) disappears into an inky blob of gloom, or an injured silence, punctuated by cranky snapping. The other (Aries), frustrated by the Cancerian retreat strategy, and feeling helpless to take any kind of action to resolve the disagreement between them, may then become furious, and release a torrent of words and actions, with the predictable effect of causing the Crab to burrow even deeper into the sands of silent pouting.

Just go back to Nature for a moment, via astrological symbolism, and picture an aroused ram butting his (or her) horns against the hard shell of an impervious crab, while it frantically digs deeper and deeper into the sand on the beach. On the beach? What is a ram doing messing around on the beach, beside the mysterious ocean, anyway? He’s out of his element. (So is she, if the Arian is female.) Just as the crab would be lost trying to crawl up the rocky mountain slopes where the ram is more at home. It requires a Sun-Moon trine or conjunction between their horoscopes – or a great deal of patient understanding from both – to bring these two very different astrological creatures together in a mutually acceptable emotional terrain. Even then, although they may learn to tolerate each other, and help each other grow, evolve and learn, the differences between them will be distinctly visible.

It’s true that Cancerians may hide in the mop closet when their feelings are hurt, and are normally quiet and reflective sorts (except when they’re making you giggle over their funnies), but they shouldn’t be considered by Aries to be totally impassive, easily molded or incapable of resistance. They may not fight with the flaming sword of Mars, and may prefer to tackle obstacles with serenity, secrecy and patience; yet Crabs are not altogether quivering, soft masses of fear. Correction: Crabs are quivering, soft masses of fear, but the Ram shouldn’t forget that hard shell they hide under while they’re shivering and quivering. It’s not advisable to rap one’s knuckles on it. Whereas the Ram is inclined to favor instant and open attack when security is threatened, the Cancerian man or woman will, as unobtrusively as possible, first attempt to seek the underlying root cause of the trouble, then maneuver out of it gradually, with a secret strategy and incredible tenacity of purpose. The Crab’s ability to hang on to your toe, ear, finger – or a notion – until it gets what it wants, should never be overlooked or underestimated. (That goes for both boy Crabs and girl Crabs.)

Aries and Cancer have different motivations, different approaches to life and different goals. But if each will give something of his (or her) basic goodness to the other, both of their lives will be greatly enriched. This is a Fire and Water combination; therefore, each is subconsciously aware that the other can destroy him (or her). Too much Aries Fire can dehydrate Cancer’s delicate feelings. Too much Cancerian Water can drown the Ram’s enthusiastic, shining hopes. Fire represents optimism, in astrology – Water, pessimism. The two elements seem to be incompatible; yet another word for pessimism is “caution,” a commodity with which Aries could beneficially experiment – and another word for optimism is “faith,” a quality Cancer would find very useful.

If they’re willing to take the time to translate the message of each other’s hearts, who knows how high the dreams of the Ram and the Crab can reach together? Perhaps all the way to the Moon – or to Mars.