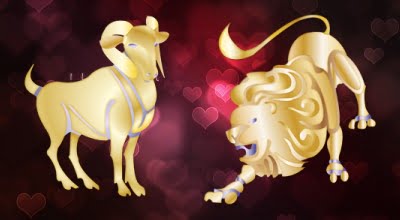 Most everyone knows that Leo is symbolized by the Lion. As for Aries Rams, once they’ve been taught (by Leo) the gentle joys of submission, they become perfect lambs. Now, the Bible hints that when the “lamb lies down with the Lion,” we may expect either Apocalypse – or 1,000 years of Peace. There’s some dispute between theologians and metaphysicians as to the happy or sad ending of the prophecy. It could be a combination of both. Most things are. Let’s hope, however, that the lamb lying down with the Lion will bring permanent Peace, and not the Apocalypse (end of the world). Of course, it might be argued that a truce to the clubbing around of these two would seem like the end of the world. A smooth, snoozy relationship between them would be the living end – of something. Possibly of all the fun they have racing each other to the finish line, and competing for the cheers of the lesser animals.

Rams are winners. Indisputably. Winning is their chief occupation. They list it that way on their resumes. Occupation: WINNING! Whatever the game may be – love, friendship, business or family life – they’ll win it. That puts Aries right at the top.

Leos don’t waste their valuable time trying to win anything. They don’t need to compete. They were born superior to everyone else, clearly the most important person in any love, business, friendship or family contest. That puts Leo right at the top too – with much less effort and energy. The question is, will there be room at the top? Well, yes … in a large arena with lots of space, they could each grab a share of the spotlight and sweet rounds of applause. But on a stage of any smaller dimensions, like an office, schoolroom, apartment or house – it might get a little crowded. Something would have to give. Namely, someone’s gigantic ego.

I’m not going to fool around with tact. It will hurt less if the message is direct and swift. It is the ego of the Ram that must bend and bow to the majesty of Leo, because the Lion and Lioness were born to lead, born to command, born to be first – BORN FREE! That means free of anyone’s domination, including the government, the Internal Revenue, employers, teachers, neighbors, friends, relatives, astrologers – and especially pushy Rams. The Aries half of this team will have to be content with knowing he or she can fight any of the other Sun Signs and win .. (well, maybe not Scorpio).

But all is not lost. (Aries considers nothing lost, just temporarily misplaced.) When I said Aries can’t win against Leo, I meant in the sense of grabbing the trophies in front of an audience. Privately, the Ram can win just about anything from the Big Cat, simply by listening respectfully to those long, Leonine lectures, heaping on the praise – and keeping personal intentions and opinions to himself (or herself). The first part is easy. Aries enjoys lifting people’s spirits, and showering compliments on anyone who excites the Mars admiration of power and strength (which Leo has in abundance). However, keeping quiet about the ultimate goal is a tough order for most Rams. Aries people do like to boast about it when they win an election, a kewpie doll at the carnival or an argument. Too much bragging in this double Fire Sign combination, and the Leonine half of the team may stalk off in injured dignity, when it becomes obvious that he (or she) is being manipulated or out-staged, either of which shatters Leo’s pride. It’s no coincidence that a group of Lions is technically termed a “pride.”

If a Lion or Lioness is in a position where stalking off in injured dignity is not possible (like an under-age child or a legal mate), he – or she – will sit in a comer and pout, looking out with reproachful, sad eyes, and stroking his or her vanity. Then too, there’s always the chance that Leo will roar like the MGM Lion, and fiercely attack the injustice perpetrated by a mere peasant. That can be dreadfully noisy. It’s safer for the Ram to allow a Leo of either sex to believe that he (or she) has won any game the two of them might be playing. No one, in or out of the jungle, can be as magnanimous, cheerful and just plain huggable as an emotionally and physically pampered Leo. Pampering, however, is a talent in which Aries definitely does not excel.

Aesop, in his fables, points out how easy it is for the Lion to be managed by a lesser animal, the jackal. When the Lion becomes furious with him and roars in great anger, the clever jackal restores himself to royal favor easily – simply by reminding the Lion, at the height of his rage, that he’s the King of the Jungle, the Ruler of All Beasts, and therefore mustn’t expect too much from a lowly jackal. It works like a charm.

The trouble is, a Ram is not a jackal. Aries is more likely to order Leo, in the heat of battle (and oh! there will be battles) to either give in – or get out. This will immediately create an emotional dead-end street. Since giving in is a total impossibility for a Leo – and getting out is a cowardly action, beneath the dignity of royalty (what true monarch ever retreats?), the Lion or Lioness is left with no choice except to roar louder, with increasing arrogance. Eventually, when Aries discovers that even a Ram’s tough horns will not topple that splendid Leonine courage and stamina (emotional, mental and physical), it’s all over but the shouting, which can last an exhausting length of time, since both these Sun Signs are rather fond of dramatic speech and posture.

“How dare you!” “Don’t raise your voice to me!” “Don’t give me orders!”
“You won’t get away with that!” “I will not do as you say!” “Oh, yes you will!” “This has gone far enough!” “Do you know who you’re pushing around?”
“You will do as I say!” “Never! Do you hear me? NEVER!” It goes on – and on – and on. If they sold tickets, they’d have a packed house. Nothing on or off Broadway has the dramatic impact, suspense and action these two manage to pack into each Act of one of their Ego plays – and the Finale inevitably calls for an Encore. I know one Aries-Leo pair who punctuate their turbulent sessions by taking turns flipping the volume up on the record player. Even hard-to-please Broadway critic John Simon would call it a hit musical.

However, although Leo must win in the final analysis, this Sun Sign is not a conqueror to be feared, ready to grab the spoils of war and grind the vanquished beneath his (or her) boots. Both the Lions and Lionesses are noted for their generosity and nobility of attitude toward the defeated. Of course, it must be admitted that Rams are not good losers. But if it’s possible for Aries to ever lose gracefully, it will be with a Leo.

These Sun Signs are astrologically trine (harmonious) and influenced by the magical 5-9 Sun Sign Pattern (see the Sun Sign Patterns section in the front of this book). Therefore, each senses the other’s superior qualities, when compared with anyone else either of them knows. Since a genuine admiration for each other is seldom lacking, when peace descends and an armistice is declared, it’s often full of vows (dramatic, naturally) of eternal loyalty and devotion. Until the next battle. Then it starts all over again.

In the family circle – in the classroom or office – or between lovers or legal mates – the relationship can be a warm and happy one, as long as Aries is willing to look up to Leo as a guide, preceptor, counselor or teacher – and as long as Leo continues to wrap Aries in the cozy warmth of the kind of loving kindness and protectiveness the Sun-ruled can give so effortlessly. It will be, on the whole, a successful association, even though not always tranquil, because the Aries-Leo relationship is blessed by the grace of the magical 5-9 Sun Sign Pattern vibration. Leo will provide plenty of sincere and extravagant compliments, something Aries needs as the flowers need rain. And vice versa. Totally vice versa. Both Aries and Leo not only seek appreciation, they quite frankly demand it. If one of them has a conflicting Moon Sign or Ascendent, their quarrels may be more serious and hurtful; yet forgiveness is, even then, usually the final resolution.

One trouble area will be those long dissertations of wisdom from Leo, which often begin with the words, “Now, listen to me, and I’ll explain how wrong you are.” Since the Ram has enough trouble coping with bossy people in day-to-day living, to be forced to sit through the same sort of thing each night at dinner may ignite the very short fuse of the Mars temper …. but I’ll tell you a secret. Actually, Aries will privately give Leo a lot of credit, and sincerely respect the advice given so freely and constantly, a lot more than he or she lets on. This may be because the advice given by a Leo to Aries is so frequently cushioned in real affection and concern. Rams desperately need loving guidance, and the chances are better than average that they’ll get it from the Lion – or Lioness. As long as it is clearly “loving,” not arrogantly authoritative.

If only the Ram could learn to ask Leo to do things, instead of commanding, “Do it now, and don’t ask questions” – the relationship between them would be smoother. No one orders royalty around like that, not even Prime Ministers. It requires lots of effort for the Mars-ruled Ram to learn to be more gracious when trying to get Leo to do something, but it’s an effort that must be made, or the struggle for dominance will disintegrate into continual dispute.

When there is mutual consideration, this can be a singular and extraordinary relationship, for Leo senses the hidden insecurities and dependency just behind the spectacular, brave Aries personality, and knows the Ram’s surface sureness is not backed up by inner conviction – while Aries will grow to depend on Leo, not just for the well-organized Leonine mind and steadiness in a storm, but also for the ability of his (or her) sunny nature to give warmth and meaning to each moment of life. The Ram knows how quivering and sensitive Leo’s heart really is, never mind the cover of superiority and bravado. These two have much natural sympathy. You can tell it when they smile at each other. It’s a strangely intimate smile, a grin of gratitude that says: “Thanks for understanding me – I understand you too.”

In each other, Aries and Leo will find the excitement they are constantly searching for. They’re both essentially dynamic personalities, driven by a desire to live life fully, missing nothing. They know that stars grow wild, like a field of daisies, somewhere high above and beyond the banal and the mundane. And even though their goals may be different, unless one of them had the Moon or Ascendent in a more financially cautious sign at birth, like Cancer, Scorpio or one of the three Earth Signs, they both believe in arriving at their destinations by traveling First Class, not just in a material sense but in every way. That may need some careful thought to be comprehended.

We can take the world others created or imagine a new world. Aries and Leo would rather imagine a new one into manifesting, maybe the kind they dreamed of when they were children. This may be it, they muse when they meet, or at least the start of that new world. There’s no telling where it will lead .. but it won’t be boring.