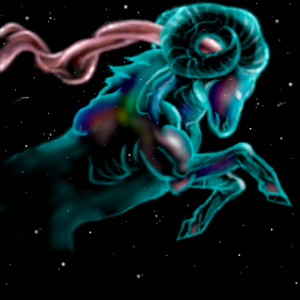 Yes, knights in white horses have shadows. And you might expect that with all that shining armour, with the sunlight glinting so brightly on it, the shadow would be pretty dark. All fire signs, because their reality is so coloured by their inner vision of a mythical world, have a shadow that is pretty heavy and earthy. The same is true of Aries. We can apply two words to describe the qualities of Aries’ shadow. Sloth and pettiness.

Now, the slothful side isn’t something you’d notice, what with the hurry and the impatience and the quickness of the flash of armour whisking by. It isn’t usual to think of Aries as lazy, really, in the sense that he lacks physical energy or dynamism. But he can be inclined to be a dreamer, and along with all those lovely images of chivalry and courtly love and the glory of the chase, we should remember another facet of medieval life. This is the attitude of the noblesse toward the world: because he’s at the top of the hierarchy (even if he’s financially impoverished), he should be supported by those beneath.

This connects with the secret dream that many Ariens have: the wealthy patron. Now the dream of the wealthy patron isn’t quite the same as Taurus’ love of material luxury, or Pisces’ gentle passivity which often requires a strong support. Aries can believe so utterly in his own dreams, his own talent, his own messianic mission, that he expects that less talented souls should provide the material means for him to achieve it. Even Joan of Arc arrived at the chateau of Vaucouleurs and demanded a horse, armour, a company of fighting men, a groom, a squire, and some nice clothes so that she can be presentable for the king.

This expectation that others should do the messy work and provide the support is a real problem with many Ariens. It’s why so many creative, gifted, idealistic Ariens with a real talent come to nothing. They’re still waiting for wealthy patrons, still assuming that the world owes them something for their gift. And when it isn’t forthcoming, they can become angry and irritable, as though life have injured them. It isn’t that Aries is averse to work. He can work harder than any other sign, devotedly, obsessively. It’s just that his work must be what he wants to work at. But all those annoying mundane details should be cleared away before he arrives. He doesn’t want to be bothered with them.

It’s common enough for the Aries man to take this stance in his relationships. Aries tends to be hard on secretaries, manservants, messenger boys, shopkeepers. He’s impatient, irritable and annoyed if something isn’t done quickly, immediately and perfectly. The fact that he might blunder if he tried to do it himself is irrelevant. He shouldn’t have to try doing it. He’s Special. He’s the Knight. Knights who don’t polish their own armour or feed their own horses. That’s what lesser folks are for. Yes, the knight can be fairly obnoxious when you catch him at home. His gallantry and bravery and noble deeds compensate well enough; and they also overshadow what a nuisance he can be if there’s a speck of rust on the cuirass.

This takes us to the second side of Aries’ shadow. I mentioned the word pettiness. Perhaps pernicketiness would be a better word. It’s about that spot of rust. Because he isn’t terribly related to the earth plane, Aries can often be a little compulsive about it. He can even display qualities which are usually expected of what is traditionally the Queen of Pernicketiness, Virgo. But the Aries brand is different from Virgo’s habitual need for order and pattern and ritual. Aries doesn’t want order. Order is a concept he’s not interested in, since his universe is primarily filled with the figure of himself. Order means adjustment of many parts within the whole. For Aries, there’s only one part – him – and the whole contains him and his vision. No, Aries is pernickety in another way. What should be done for him should be done perfectly. Spotlessly. Flawlessly. Immediately. The famous Arien temper can be unleashed with great rapidity if something hasn’t been done right. Aries has no patience with sloppy service.

He can even make a crusade of it. If a shirt comes home from the laundry with the stain still on the collar, it means a public campaign and many long and emotional confrontations with the cleaning establishment. If the steak isn’t well-done, or the chips are soggy, the entire restaurant becomes a place of siege, because the principle takes over, and think of all the suffering customers, and what is the modern consumer society coming to, and it’s the fault of the government, and…Well, you get the picture. The tiniest issues can explode with resounding fury in that noble brain, because tiny issues always seem to Aries to be symbolic of big issues. The key to this is the fact that he seems to see everything symbolically. Something isn’t just an isolated incident or accident; it’s symptomatic always of something greater. So the spot on the collar is symptomatic of the slackness with which people nowadays treat their work, and the soggy chips are symptomatic of the low wages and bad employment practices which emerge from the government he happens to dislike, and so on, until you begin to wish he’d just go off on Crusade to capture the Holy Land and leave you alone.

Don Quixote is a figure that contains much of Aries’ shadow. He tilts at windmills. This peculiar trait in the Knight in Shining Armour is most disconcerting, since Aries ordinarily is big in everything – his heart, his wallet, his visions. Yet he can explode over trifles. The trifles are usually mundane things, like trivial details which any earth sign would simply laugh at and get on with life.

A word of advice to the Aries shadow might be: relax and take it easy, because the world is also inhabited by other people who are important. The Aries who saves up his creative ideas like a Virgin saving her maidenhead may be sadly disappointed in life, since the wealthy patron may exist only in his overheated fiery imagination. He may have to get out and provide the means himself, often through work and pursuits which are not initially to his taste. And the Aries who expects that everything must be done for him instantly and impeccably needs perhaps to recognize that other people have other lives, other needs, other dreams, and also other concerns besides him. Moreover, they, like him, aren’t perfect. The imperious Aries shadow needs to be tempered a little with the bread and salt of patience and a bit of gentle tolerance. Given some relaxation, all that armour weighs far less heavily; and if you don’t beat the horse half to death in your hurry to get to the Crusade, the horse might turn out to help you when you need help the most. Aries can learn a lesson from Henry V’s bowmen at Agincourt. They had patience, tolerance, humility, and discipline. And they won.