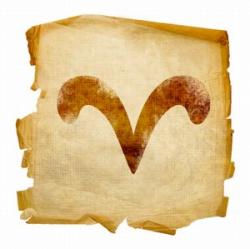 The glyph which represents Aries ‘Y’ can be interpreted in several ways. From a purely physical standpoint, the glyph represents the eyebrows and the nose, two parts ofthe body under the rulership ofthe Ram.

Aries also symbolizes the realization within oneself that one is different and apart from the rest of humanity. It is therefore the individualizing agent, the ego, the consciousness of self. Aries is the beginning, that first emanation of self-awareness coming from the realm of the collective unconscious (as embodied by Pisces, the last of the signs).

Let us imagine that the first eleven signs are represented by eleven rivers which cross the land, picking up stones, fallen leaves, mud, silt, sand, etc., as they follow their particular courses on the way to the ocean (Pisces). All the matter which each river has collected is poured into the ocean once it arrives. The ocean swells with the additional water and material which has been emptied into it and overflows upon the land, creating another stream which emanates from it.

Man, in his archetypical forms (the signs), goes out into life and experiences the various circumstances of his particular Karma. What he learns about life, the inventions he creates, the level of spiritual enlightenment he achieves, the passions he awakens, etc., all pass on to the ocean of life from which the whole human race derives its motivating force. Each human being draws strength and the potential for understanding life from this great ocean and thus we are all one.

As Man becomes conscious of this life-potential, his awareness of himself and of humanity expands. This awareness is Man’s creative tool, for he is both a created being and a creator. Whatever one individual experiences during his lifetime, the results of these interchanges with life are fed back into the ocean of the collective unconscious. This is why Pisces is so aware of other people’s feelings and why it is such a resourceful sign. It has the collective experience of Mankind to draw upon.

Man grows through the consciousness of himself. The ability to obtain that consciousness is achieved through his experiences on Earth, for these awaken the soul to itself as a separate stream from the great, sleeping ocean and eventually to an awareness of the entire ocean as well.

Aries is the first outward motion of a separate stream and hence the Aries individual is very aware of him- or herself as a human entity surging through life. His strong currents stimulate and refresh all who come in contact with them. But his strength can also be the rushing, destructive force of water which has burst through the dam. It is therefore up to the individual Aries to control his life’s waters by being aware of their flow and thus properly direct his stream. We see that the glyph for this sign is a fountain gushing forth water (consciousness) in an upward and outward direction ‘Y’.