ndeed they were constantly bumping. .. if they saw a cloud in front of them, the more they tried to avoid it, the more certainly did they bump into it. 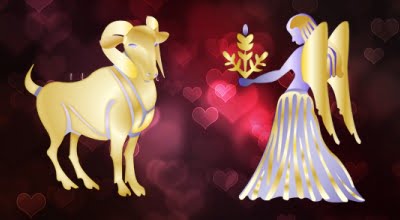 Aries likes to generalize, hates to bother with details, and is bored by meticulous analysis. Virgo is meticulous, likes to analyze details, and abhors generalities. That gives you some idea of the distance between these two Sun Signs to begin with – and now that we’ve begun, here are a few more.

Rams initiate all their actions from pure feeling – they trust their emotions and are skeptical of undue practicality. Virgos are practical, they trust their mentality, and are skeptical of pure feelings and emotions. When Aries people are upset, they’ll usually shout it from the rooftops and open up their grievances to air them out. When Virgos are upset, they keep it buried inside and shut up their grievances to gather the rust of resentment. Rams are careless of their physical health, yet they’re seldom chronically ill. Virgos are extremely careful of their physical health, yet they frequently complain of assorted symptoms of illness. And that’s only a partial list of their differences.

Both of them are usually quick to help others, although their motivations are somewhat different. Arians do it because it makes them feel good to be the cause of happiness, since it proves to them that they can pull off a minor miracle anytime the occasion arises. Virgos do it because it gives a Virgin the nervous twidgets to stand by and see confusion adding up to chaos, when a little clear thinking would, in their practical opinion, untangle all the snarls. It’s instinctive for a Virgo to step in, take a nip and tuck here and there, then go on his or her way without either waiting for or desiring any thanks. Aries won’t wait around too long for thanks either, but you’d better believe the Ram desires it. If it isn’t forthcoming, Aries will be both hurt and angry, unlike Virgo, who doesn’t really expect too much of people anyway, and is therefore capable of shrugging off ingratitude by chalking it up as just another one of the many imperfections of human nature.

It’s true that both of them lean toward purity of purpose. Each wistfully longs for the beauty of the spirit and seeks a shining ideal. Aries and Virgo ride together on a mutual search for truth and loveliness, but when their snow-white steeds reach a fork in the road, they take off in different directions. The Rams blindly and instinctively believe they’ll find what they’re looking for, despite all disappointments and the apparent impossibility of success. Virgos have little or no hope of ever actually discovering the Holy Grail, and even if they did, you can be sure they would find a chip in it.

Still, regardless of all these split-offs in their personality patterns, the Ram and the Virgin, when their paths cross, can find a strange comfort in their relationship. If it’s business, admiration and respect – and a mutual desire to help one another – will nearly always result from the association. If it’s friendship, it will probably take a business twist somewhere along the way. In the family circle, there’s also much warm satisfaction possible through this blending of the two divergent natures, influenced by the 6-8 Sun Sign Pattern vibration.

Aries and Virgo often confide things in each other they would never tell anyone else. They seem to sense that the mutual trust implied by intimate confession won’t be violated – and it seldom is, though the Ram may find it hard to conceive of how the situation described by Virgo could ever have developed, considering his or her own outlook. Likewise, the Virgin will sincerely sympathize with the Ram’s experiences, even while privately failing to comprehend why they were ever permitted to occur.

Yet, no matter how close Aries and Virgo may be, Aries will feel deeply Vir¬go’s frown of displeasure when he (or she) is late for an appointment, goofs off; or becomes careless and irresponsible. It’s never as easy for the Ram to enjoy work as it is for the Virgin. What Aries views as harmless procrastination, Virgo interprets as an almost sinful waste of valuable time. Of course, after office, study, or family obligations are properly attended to (all of which may take end¬less time and attention), when there are no guilty twinges because everything is nicely snuggled away in its own cubbyhole – the Virgins often lead rather inter¬esting and, in rare cases, even shockingly unorthodox private lives, when they lose those compulsive worries.

Sooner or later, after these two have spent a reasonable amount of time together, the Rams will be sure to remind Virgo of his or her inclination toward unnecessary worry and receive a reply like, “What compulsive worries? I don’t allow things to bother me to excess.” Whereupon Aries is likely to retort, “Oh, no? How about the morning last week when you missed your daily shower be¬cause you couldn’t find the Ivory Soap, and you won’t use any other kind¬spilled a drop of ink on your shoe, and found a fly in your soup at lunch? You had a splitting headache and nervous indigestion for days afterward.”

The Virgo rejoinder probably will be, “That is somewhat exaggerated and incorrect. The indigestion lasted only three hours and forty-five minutes, and it was caused by that dreadful, greasy soup I ate, not by my nerves. The headache lasted sixty-five minutes – not several days – and was the result of my not get¬ting enough sleep the night before, not from compulsive worries. I missed my shower, not because I couldn’t find the particular bar of soap I always use, but because I was late for an appointment. As for the ink, naturally I was a little up¬set about ruining a twenty-two-dollar pair of shoes I’ve only worn for a couple of years. I can’t afford to be as casual about money as you are.”

That last remark is Virgo’s tactful way of accusing Aries of being extravagant. Virgins are careful to maintain scrupulous politeness when they’re annoyed, so their irritability is softened by their typical courtesy.

Because Virgos are so analytical and fond of clarity, Aries people are in¬clined to look on them as picky and cold. Far from being cold, however, Virgos are the most inwardly sentimental of all the Sun Signs. (The important word in that sentence is “inwardly.” It causes all the misunderstandings.) Their very discrimination itself implies high ideals for things and people to live up to, and when they don’t – well, anyone would be cranky once in a while, from being so constantly disillusioned. Virgos are frequently nervous around Aries people be-cause the Virgins dislike being openly firm – and dealing with a Ram requires, at times, being openly firm. The Arian impulsiveness can cause Virgo to feel se¬cretly inadequate because of being helpless to change a situation, so they’ll sometimes try to cover the feeling with a judgmental attitude – a kind of silent disapproval. It doesn’t really matter what kind it is. Any kind of disapproval will annoy Aries, even if it’s only vaguely implied and not verbalized. It is, nevertheless, felt or sensed. The typical Aries man or woman isn’t looking for reasonable discussions or cool, sensible Virgo remarks about right and wrong, what’s proper and practical, and what is not. Rams respond beautifully to generosity of spirit in others – and quite unpleasantly to stuffiness or criticism. Aries will often rebel and struggle for identity in a close association with a Virgo because he (or she) considers calm, rational talks a cold substitution for affectionate warmth, friendliness, and an open-hearted manner.

Yet, when there’s a favorable aspect between the Sun and Moon in the charts, Aries and Virgo can grace one another with many mutual blessings. In an Aries-Virgo association where there is such a harmonious Luminary influence, the Ram may surprise himself (or herself) by following Virgo’s quiet exam¬ple and paying serious attention to Virgo’s always well-meant and helpful ad¬vice. And the Virgins will surprise themselves too, by allowing the Rams to coax them into losing many of their inhibitions and dropping a few layers of their usually sedate behavior. All it really takes for this combination to blend smoothly is for each person to spend more time concentrating on the virtues of the other, rather than dwelling on the differences.

The clerk in the supermarket who frowns at the cash register and crankily scolds you for not taking your place in line is probably a Virgo. But the softly smiling, mild-mannered, and bright clerk who courteously answers your questions about where the soybean patties are kept and when the fresh melons will be available, and cheerfully helps you pick up the things that spilled from your cart is probably also a Virgo.

The customer who aggressively demands to be waited on immediately in a store, than leaves all the clothes hanging on a peg in the dressing room, after trying them on impatiently and deciding they all look dreadful- is probably an Aries. But the friendly, trusting person who will loan a stranded, out-of-town stranger ten dollars without even asking why it’s needed is probably also an Aries.

The thing of which Virgo is seldom aware is that Aries senses unerringly whether the Virgin’s concern over his or her welfare stems from genuine devotion, affection, and friendliness – or merely from a dutiful obligation. And when it stems from the latter, the Ram would just as soon try to manage alone as to accept help from someone whose true sympathy and heart isn’t involved in the offer, however much he (or she) may need Virgo’s assistance and advice.

As far apart as they seem to be at first glance, however, Aries and Virgo can stumble upon some happy surprises when they hike along together and take care to avoid the thistles, brambles, and thorns of disagreement. In the Ram, the Virgin can find someone really worthy of helping toward achievement, some- one who will generously shower Virgo with a warmly enthusiastic and touching gratitude in return, someone who may even be able to unlock the little doors of those Virgo inhibitions and private longings. In the Virgin, the Rams can find the sincere appreciation they need – and a heart as honest and loyal as their own. Virgo can teach Aries to discover beauty in small things, to know the wisdom of waiting – to believe in the eventual success of patience. Aries can teach Virgos to discover and believe in themselves.