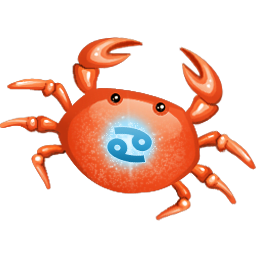 “You see,” he went on after a pause, “ifs as -well to
be provided for everything. That’s the reason the horse has all those anklets
around his feet.” “But what are they for?” Alice asked, in a tone of
great curiosity. “To guard against the bites of sharks,” the Knight replied

After learning about the Cancerian sense of humor, you may have the impression that the office of a Cancer boss is a real fun place, with everything except confetti and a sommelier to serve champagne. The employees will all be straight men, and the lunar executive is the stand-up comic with the clever one-liners. It will be like going to work in a nightclub every day. Well, no-not exactly.

If you work for a TV or movie funnyman, all that just might apply. Anywhere else, you’d best dust the confetti off your shoulder, straighten your tie and forget the jokes. The serious, hard-working Caneerian executive doesn’t go for hilarity on the job. His working humor can consist of anything from laughing at an over-confident competitor falling on his face to a faint chuckle when you ask him to double your salary before you have proved yourself. Both of these situations will strike his funny ribs and bring a wide grin. Nothing else will arouse much mirth or many giggles. The humor is still there, beneath his crisp business face and his snow-white collar, but it will be used sparingly on the job. Most of his laughs at work will be saved for the human comedy of errors, or to ease someone’s nervous­ness, and the tone will usually be kindly. Seven hours and fifty-nine minutes out of every eight working hours, how­ever, will be humorless, even grim.

I don’t mean to frighten you into thinking he’s Simon Legree (though there are a few Cancerian bosses of that type scattered around the world). It’s just that your job under a Cancer boss will be more secure if you see that your trousers are creased, your hair is parted neatly, and your brain is operating at a sharp level than if you tell a few fast ones, happily trying to play second banana. The top banana you’re trying to impress is off duty in the humor mill while he sits behind that polished mahogany desk, with his mother’s picture on one side, and the group picture of his family on the other. Can you imagine what would have happened to a member of Calvin Coolidge’s cabinet if he pulled the one about “who was that lady I saw you with last night” in the middle of a meeting? I know an employee who made a serious error in quoting a shipping date to a valued client. When his Cancerian superior called him in for an accounting, prepared to be kind, he cheerfully said, “Boss, I sincerely regret my stupidity, and if you’ll give me a couple of days, I’m sure I can come up with several excellent excuses!” He would have been a scream in old-time vaudeville, but he got the hook from his unamused Cancer employer.

Hopefully, you will profit from the large egg that em-i ployee laid at his last performance. The Cancer boss is in | business for one purpose only. To make money. Period. I Money. It’s made of green and black printed paper, and | it has different numbers in the upper comers, signifying ! how much power, prestige, and luxury it will buy. You trade it for hard work. The harder you work, the more pieces of this green and black printed paper you get and the larger the numbers are in the upper comers. That’s his philosophy, in a crab shell. It would be wise to make it yours.

So you think he’s a little stuffy, do you? Maybe if he re­laxed more, and stopped being so strict about goofing off, -and created a friendlier atmosphere, he would not only be more successful, he would be happier, too. Has that oc­curred to you? Glance at a copy of Who’s Who in Com­merce and Industry. The summer birthdays will be the heaviest, and July will top them all. Then take another look at the names of the Cancerians at the end of “How to Recognize” this Sun sign. He must be doing something right.

Whatever business he is in, the Cancer boss is really in his element when it comes to trading-from horses to stocks-and anything in between. He is a past master at figuring out what people want and supplying it at a sub­stantial profit.

The lure of cash may even have taken him away from the education he wanted, and he became a self-made man. It not, then you can safely wager a month’s paycheck that, while he was in college he was working part-time and setting a little moola aside. What am I saying, college? This man probably had his first employment at the age of six or seven, going to the comer store to get milk or bread and charging his doting mother two cents for the trip. Ask him when he began his first salaried job. You’ll probably get quite a shock. But it will increase your status with him. He’ll respect you and make a mental note that you’re thinking right. By the way, watch those mental notes he makes. He has a memory like an elephant. Cancer bosses seldom forget a thing. That includes what time you arrive, what time you leave and how many times you visit the washroom while you’re there. But hell also remember the nights you stayed late and the time you worked all week­end to help him with an important contract, and you’ll be justly, even generously, rewarded.

He may have inherited wealth and position, but the Cancer boss will seldom rest on his family’s laurels. He has to prove he can stack up the gold pieces on his own. Still, he’s not greedy. He’s truly sympathetic and charitable, without being naive about it. To him, charity begins at home. His family comes first. Next, his business. After that, it’s your turn-and everybody else’s. No one can be as big-hearted and financially generous when the recipient is deserving, and when there’s really nowhere else he can go for help. The crab will make his gesture then-and it • won’t be small. Just remember that there’s a wide berth between honest charity and rash speculation. He has a soft heart, but he doesn’t have a soft head.

In reality, your Cancer boss is a deeply sensitive, gentle person, and basically insecure. Success calms many of his inner fears, and that’s why he pursues it so devotedly. When he’s hurt, and that may be far more frequently than you realize, he crawls into his hard shell. It’s also a Cancerian defense when he doesn’t get what he wants, and it often works to his advantage. People always feel sorry for a crab who has retreated inside his shell, and some­times they’ll promise quite a bit to coax him back out.

There are lots of female Cancerian bosses, too. Almost every single Cancer woman you’ll ever meet has worked at sometime in her life, is working now, or is bossing you now. She may be in love with love, but it will have a rival in her job that can win in a walk. She won’t be happy with emotional security alone, even if she sometimes thinks she would. To all Cancerians, happiness is a twin-money and affection in equal measure. The female crab probably detests housework, anyway. Most Cancer women do. If you’ve heard differently, it’s because of the attachment they have to the kitchen. Actually, these women would much rather compete in a man’s world, with all their sensi-jtive feelings, than drudge through the daily routine of j sweeping and dusting and dusting and sweeping, with an i occasional mopping thrown in to relieve the monotony. | They hate to admit it, and their homes are usually pleasant | enough places, clean or messy, but they do dislike being ; housewives. The affection and protection that goes with it I is dandy, but the furniture polish they can do without In most ways, the women executives don’t differ essentially from the men, with one exception. The girl crabs dont wear trousers and white shirts and ties. They wear gentle smiles to hide tender hearts and hard shell minds, usually topping it off with feminine and romantic clothing.

All Cancer bosses have a remarkable insight into your feelings. They’ll understand everything you say with un­canny accuracy, and the unnerving part is that they’re also perceptive enough to sense the meaning of the words you leave unspoken, so watch what you leave unspoken. Cancerians aren’t really loners. They may act like it at times, when they’re passing through a cranky or depressed mood, but they usually surround themselves with people. Solitude is fearful to most crabs, except to those who have sought it because of very deep wounds very early in life, and even they are miserable alone, though they may not consciously realize it.

It’s good to work for a Cancerian executive. Youll Ie am more in one month from him than you will in a year from other bosses. The most important thing you’ll learn is consideration. A Cancer boss drives a hard bargain, but he’s fair while he’s being shrewd. Playing a game of win or lose with the big guys who hold the blue chips is one thing. Taking advantage of the innocent is another.

I He’s essentially a kind and decent man, who’s moved to deep pity by both cruelty and misfortune. Courtesy and compassion aren’t old-fashioned words to him. They are part of his gentleman’s code. If your intentions are sin­cere, your motives are sound and your heart is honest, he’ll back you through mistaken opinions and personal troubles.

The crab waits patiently and tenaciously, with both eyes wide open. His mind remains alert and practical, but his heart dreams, and the dreams are as magic as the moon­light that stirs him. They can take him on a glamorous, exciting trip around the world, or inspire him to build a towering industry that uses its excess profits to encourage scientific research which will help humanity. But every dream is built on a solid foundation. His poetry is beautiful, but it always makes sense.

As for that joke, make sure you tell it to him at lunch, not on company time. If it’s about plain people and has a good point, hell laugh. Then you’ll find out what he’s really like. Watch his eyes, and you’ll see that the lunar laugh is a bright and brave answer to inner fears and hurts that only the patient crab, with his gentle heart and tough shell, could dare to give.