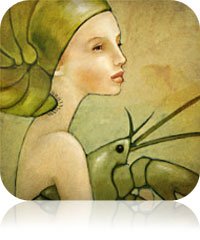 It’s always nice to have a Cancerian work for you, because he actually works for you. He doesn’t work for glory or a misty chimera, and he doesn’t stop by each day because he has a crush on the receptionist. He never thinks of his job as a way to express his ego or as an amusing way to pass the time between coffee breaks. He works for the simplest’ reason in the world. Security. Meaning, of course, his pay-check.

You should understand immediately that a Cancerian paycheck must be made of elastic. It will have to gradually stretch bigger and bigger. As time goes on, and he gathers experience, proves his loyalty and shows his talents or abilities, he’ll expect more money. His income must al­ways equal his output, and his output will steadily increase. The paycheck will have to match it or he’ll be forced to do something completely against his nature-let go of his job and go elsewhere. It’s never easy for the crab to let go of anything-toothbrushes, old get-well cards, shoe-strings, socks, girls, empty ball-point pens or jobs. He gets a firm grip and you can’t pry him loose. Dependability and tenacity were the materials used in building his nature, and they were used with a lavish hand. They serve him well on his ambitious climb to success. He may shake and shiver and tremble a little on the way when the sharks ap­pear and his emotions are cut to the quick, but all that will be kept safely encased inside his tough shell of de­liberate purpose. Despite the crab’s apparent gentleness, Cancer is a cardinal sign, which means Cancerians were born to take responsibility-to lead, not be led. They’ll accept discipline from the boss with calm docility while it’s necessary, but never forget what’s behind their willingness to follow orders gracefully. When the crab obediently serves, he’s really serving his own secret purposes. His job happens to represent an important brick in the large edifice he’s building. As soon as the sturdy structure is completed, he will take over and rule. In other words, he is aiming for an executive position. It never leaves his mind for an instant. It’s best you keep it in yours also, for obvious reasons.

His motivation in laying those bricks with such strong mortar is seldom a desire for power. Prestige doesn’t goad him on, as it does the Capricorn, the goat, nor ego, as it does Aries, the ram. He’s driven to accumulate cash and an unshakable position of authority for different reasons. Cancerians need the security of knowing that all their tomorrows are safe, so they can finally relax and live where their hearts are-in yesterday. That takes money. Antiques are expensive. So are huge, old houses and luxurious dinners, served graciously. Collecting old autographs requires a lot of cash, too, and handsome frames to hold portraits of ancestors aren’t cheap. Good hi-fi sets for classical music cost plenty of dimes. Besides, the Can­cer employee may need ubstantial sums to support rela­tives who have moved in during a troubled spell, or an offspring may be in need of more money for a variety of reasons. In addition, the crab has a multitude of fears, both real and imaginary. They form a complicated network of nagging self-doubts and feelings of inadequacy, which authority and leadership will ease the way novocaine dulls pain.

He needs one more thing. Affection. Naturally, that’s not your responsibility. Still, it helps to be aware of it. Some-day you may have to give him a squeeze of the hand and a speech of warm gratitude instead of a raise. It won’t be a substitute for cash by any means, but it might make him decide to stay around a little longer. Appreciation is soothing to the Cancerian, but it will never completely re­place his sentimental attachment to his bank balance.

So don’t go overboard and get into the habit of saying, “Rocky, old boy, I can’t pay you the money you’re worth now, but I love you madly.” He may misunderstand your motive after a time or two. That is, he may think you’re insincere. Be equally cautious with your female Cancerian employees. You could easily be misunderstood by them. The Cancer woman is shy and timid with strangers, but she recognizes a romantic signal from miles away with frightening speed. If she’s single, you’d better hope you are, because she’ll get that tender, possessive look in her eyes, and you’ll have quite a time getting out of the noose. If she’s married, she’ll freeze you cold or snap at you until you’re properly respectful. Give your lunar people love, but try to remain impersonal about it. I know that’s like saying, “Hang your clothes on a hickory limb, but don’t go near the water,” but that’s the way it is. The strategy is something you’ll have to figure out for yourself.

Just as surely as Cancerian Stephen Foster wrote “My Old Kentucky Home,” the symbol of home will enter the lives of these employees one way or another. Your lunar secretary’s mother may drop by frequently to lunch with her daughter-and a female crab working responsibly as a clerk in a department store for years will walk out suddenly if her son is in trouble or ill, and needs her. That salesman who was born in July will enjoy a bit of travel, if he’s a bachelor (as long as some one calls his mother every day while he’s gone to see if she wants anything). But if he’s married, he may not appreciate being sent out of town or being asked to sacrifice holidays at home for business emergencies.

If you have any Cancerian employees who are going through a separation or divorce, you have a problem on your hands that may disrupt your staff for weeks. They’ll spread a cloud of gloom over the office. If it’s a female, double your order of Kleenex for the powder room. There will be periods of moody weeping, and she may spend a lot of time in court. The judge will award her substantial alimony or else. If support money for children is involved, she may need a month off. Physical desertion is bad enough, but the threat of losing financial security will arouse every ounce of tenacity in her, and that’s a lot of ounces. Crabs of both sexes take a broken home very hard. Your best bet about this Cancerian home fixation is to hang a poem on the wall of every office. “Home Is Where The Heart Is.” Just beneath it, hang one of those arrangements of rare coins, on a background of lavender velvet, framed in sterling silver. Have you missed the point? They won’t.

When there’s something you want to discuss with the Cancer employee, and you want to put him in a receptive frame of mind, take him to lunch or dinner. Cancerians adore people who invite them for a meal. Not only does it mean he won’t have to pick up the check, but food spells security in capital letters. Just watch his eyes light up. He may not be a big eater himself, but he’s still more contented and peaceful when there’s an abundance of food around. Be sure you take him to one of the finest restaurants in town. He’ll love the luxury, since he’s not paying the bill.

Cancerians are industrious workers. You can rely on them to be steady and reliable under all circumstances, except one. Cancer is a water sign, and people born under the three water signs enjoy liquids in all forms. If the aspects between the planets were afflicted at birth, one of these forms may be a hundred proof. The Cancerian with a drinking problem is rare, but if you should happen to come across a July-born employee who fills the air with the crazy lunar laugh too frequently, or who weeps melancholy tears continually, he may be enjoying some­thing stronger than Java on his coffee breaks. Don’t form the opinion that every Pisces, Scorpio or Cancer person is a nipper. True, people born during these periods are more often found drowning their sorrows than others, but that’s an overall statistic, covering millions of humans, and you can never use it when judging people individually. Most of the Cancerians you meet will be sober. In fact, they may be so sober you wish they would relax a little over a cocktail.

They take their work seriously, and themselves even more so. The lunar sense of humor is warm and wonderful, full of sensitive insight into human nature, but when some­one’s wit hits a tender spot, the crab may be deeply hurt. It’s best to let him make the jokes. With his kind heart and his sharp perception, it’s unlikely that he’ll wound anyone under the guise of comedy. The typical Cancerian employee won’t scatter his punch lines during working hours on company time, but when you take him to dinner, he might keep you chuckling from the tomato juice through the cherries Jubilee. Crabs can be utterly fascinating con­versationalists, unless they’re in a gloomy mood, in which case one word an hour, snapped out briefly, will be about par. They can pout beautifully. But they can also speak magnetically, and sway your emotions easily through their ability to play on people.

Cancerians feel things. No one can be more tender and sympathetic than a Cancer person when you need a friend, and no one can be crankier when they suspect someone is trying to take something from them, either emotionally or tangibly. When the bank statement doesn’t balance, they may frown in sullen silence for hours afterwards, and if a crab thinks an associate is after his or her job, there can be some pretty childish behavior, as a prelude to a fight-to-the-death for possession and ownership. The victim may not even suspect war has been declared until the vic­tory has been won. Cancerians have more secrets than J. Edgar Hoover, James Bond and Sherlock Holmes com­bined. They seldom advertise their moves in advance, and they almost never reveal their true inner thoughts, except to those who are so close to them there’s little chance the confidence will ever boomerang.

Well, can you tell the difference between the boy and girl crabs on the beach? Both sexes are gentle and dreamy, yet as sensible and practical as red flannel underwear. You’ll be glad you hired them when business takes you away from the office more than you like. They love to watch the store.

The Queen turned crimson with fury, and, after glaring at her for a moment like a wild beast, began screaming, “Off with her headi!