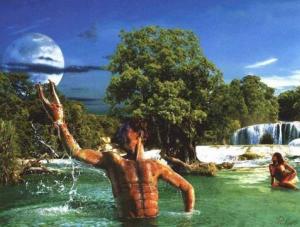 We can sum up the Cancer myth in a word, Mother. And what a complex word! Mother is not only the woman who bore you, nurtured you, raised you. It is also what depth psychology calls an archetype – that is, a symbol of an innate life experience common to everybody. Mother means different things to different people. It can mean the safety and pleasure and warmth of a secure childhood. It can mean the devouring, possessing emotion which threatens to suffocate. It can be strong and sustaining. It can be destructive and dark. But we all have come from mothers. For Cancer, the experience of Mother in all its forms is rooted in his inner life. He never wholly escapes Mother, for he must learn to become Mother. At the beginning and the end of his life stands this powerful figure – representing the feelings, the past, the childhood, and the security he strives for so intensely. Mother is always an enigma for Cancer. You can find Cancers who seem to have no family feeling at all – ‘family’ is an embarrassment to them, not at all something they cling to. You can be pretty sure, in these cases, that childhood holds some memories that Cancer would rather forget. Many Cancers are perpetual wanderers, always seeking roots somewhere else. Often they are running away – from the past, from childhood, from Mother.

We tend now to be a little arrogant about the ‘superstition’ with which our ancestors worshipped the earth and prayed for rich crops and a good harvest. We have a vast and imposing array of modern technology with which we believe we control the earth. We no longer placate the Mother by elaborate mystery rites. Man believes he is supreme; the earth is there for the taking, and the heavens too. Yet think about childhood. Mother is as powerful to a child as Mother Earth once was to our ancestors. She is huge, vast, mysterious – the source of food and life, the giver or withholder of love and comfort. Nothing a man meets will ever be so big again as Mother was when he was a baby at the breast. Do you think we so easily forget? And if that child is a Cancer – sensitive, open, aware of all the secret currents of feeling that pass back and forth between himself and his family – he will certainly not forget. He may obliterate recall of it, because it frightens him that anything should have that much power. But deep down, Mother remains a mystery, as powerful as the mystery of the growing crops. There are things we cannot really tackle with our well-trained, rational minds.

Now there are some interesting sidelights to the myths about the Great Mother. First of all, she always had a consort. The consort was both her son and her lover. In ancient mythology, incest themes abound. If we take them symbolically, rather than literally, this means that the Goddess and her Lover stem from the same source, the same origin. And this son-lover is often represented in myths as the creative life of nature – the artist, the beautiful young god who infuses his breath into the growing plants, the sun-god who brings light to the world in the spring. Easter, our great Christian religious festival to celebrate the Resurrection of Christ, has its roots in an older past: the celebrations of the resurrection of the young god, returned to bring life back into the land after the cold winter. In the autumn, according to the myth, he dies – and the earth grows barren, and nothing grows, and the world is shrouded in barren cold. All over the Mediterranean the festivals of the death of the god were celebrated by thousands of women mourning his passing, weeping and offering sacrifices. In the spring they rejoiced.

What does this mean, when we consider that it is a myth closely bound up with Cancer? First of all, it is a myth of cycles. Whether myths were devised to explain nature or were deeper and more profound in meaning, is a matter of debate among archaeologists and psychologists. But there we have a myth about an eternal waning and waxing of life – like the moon, which rules Cancer. Cancer is a sign of phases, of cycles. The Cancer individual experiences these ebbs and flows of life-force, of creativity, of joy and sorrow, perpetually through his life. He is closer to the natural processes of Mother Earth than any other sign; many Cancers are in fact extremely vulnerable to the changes in climate and season, and go into a kind of hibernation during the winter. They may be slightly depressed, or listless, or lacking energy. Then, when the spring comes, they come to life again.

There is another, deeper meaning to the myth. The Mother and the young god who symbolize creative life: here you have a picture of the way in which artistic creativity works. Many Cancers are highly imaginative, creative people. Writers like Proust, Hesse, et al. fill up the ranks of creative Cancerians – painters like Van Gogh (Cancer rising), etc. In some way, the creative Cancer is a kind of midwife¨ he creates something, drawing from depths which he can scarcely understand, making something from the fabric of his dreams and visions and fantasies and feelings. When it has been created in form, the phase is over. For a period of time he may feel depressed, empty. That is the winter. Then, he is ready to create again. The thing he is drawing from is a mystery. No true artist can really explain where the source of his inspiration lies. It’s like the ocean – huge, fathomless. He, like the crab, inhabits the patch of sand midway between the mysterious ocean and the dry land of ordinary life. Ideas and images come to him, and he gives birth to them. Then the tide recedes, and for a time he is stranded. Then the process begins again.

Cancer is a sign of great complexity and depth. On the surface, you may catch the Cancer playing any role – he is a born actor, and his sense of camouflage and self-protection always compels him to play a part in any social situation. He may be giddy, giggly, moody, whining, sullen and sulky, affectionate, passionate, withdrawn, ecstatic. You can never be sure how he’s going to wake up in the morning. But beneath the kaleidoscope of shifting feelings and moods, beneath the hard carapace shown to an unfriendly world, there is the perpetual cycle of death and rebirth, of winter and spring and summer and autumn. This is why it is important for Cancer to be creative, to express himself emotionally in some way. For, if we take this myth on its deepest level, Cancer is both the Mother and the son, and is not likely to be able to explain to anybody the mysterious rhythm he follows – the rhythm of the sea, of the moon, of the tides. Don’t expect Cancer to be consistent. He’s not likely to be, unless he’s chosen consistency as a mask because he feels the pressure of others’ opinions. The true Cancerian is a moody creature unable to explain always why he feels as he does. But, then, why should he explain? Nature owes us no explanations. We either appreciate her, or we lose something very precious.