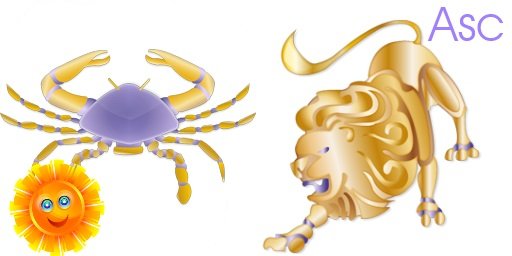 Now here’s a Cancer with a gangbuster personality demanding attention—but always with a sunny disposition. With Leo the Lion at the helm, these are no reticent crabs. They’re courageous and fully ready to make their wishes known, push for what they want, and let the chips fall where they will. A Lordly Leo personality, with its competent and confident, “I can handle it, give it to me and I’ll show you how to do this” demeanor, brings the industrious crustacean an opportunity to stand up in front of the crowd and shine. After all, Leo is the consummate showman.

This is a powerful blend of Cancer’s do-it-with-feeling diligence and Leo’s do-it-right-the-first-time competence. If the walls need painting, these Cancerians apply a coat in record time with their “do it now and think about it later” approach; then, with the housework completed, they step out into the limelight, expecting gratitude and respect. If they’ll keep one eye on their audience, constantly gauging how they’re being received and adjusting their performance to suit their audience’s tastes, they’ll likely get a standing ovation. Willing-worker competence always prevails over emotional bluster; if Cancerians with Leo rising are blinded by the stagelights, too self-centered to notice even the front row’s reactions, they’ll probably end up playing to an empty house. Perspective and objectivity are the key to allowing Cancer’s diligence and Leo’s courage to work in tandem, complementing one another and producing marvelous leadership qualities. But blind ambition and self-indulgence can lead these Cancerians into terribly obnoxious behavior: Suddenly they’re unable, or unwilling, to meet others halfway, and they attempt to get their way by issuing ultimatums. [..]