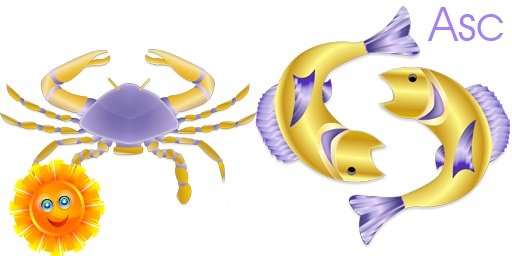 Cancerians with Pisces rising are kind-hearted people helpers who emotionally soak up everything around them. They absorb information like a sponge. But you can’t get much out of them. They’re too secretive and cautious! Without even realizing it, they leave others feeling left out. But they fit in wonderfully with self-centered people who want to do all the talking and get all the attention! A Pisces personality always makes for a good, empathetic listener, but in tandem with a Cancer ego, Pisces’ listening skills are enhanced to the nth degree. With their Cancer too sensitive to risk rejection and their Pisces too delicate to endure disapproval, Cancerians born mid-evening would much rather keep their mouth shut and their ears open. In this combination, Cancer’s subjective nature will almost always develop into a sixth sense. These people rarely miss the point and are usually proficient at reading between the lines to understand much more than others think they do.[..]

Cancerians with Peaceful Pisces rising have a gentle and artistic spirit. Though they aren’t usually motivated by promises of fame and fortune, and don’t always feel comfortable in the limelight, they approach everything with an enormous depth of feeling. Because they’re so in tune with the vibrations around them, they’re often accomplished musicians—and their active imagination, joy in working at home, and tendency to keep late-night hours might add up to a talented writer. They need to be sure, however, that their imagination doesn’t get the best of them—and that’s no easy matter! They sometimes conjure demons where there aren’t any, so if these Cancerians aren’t careful they find themselves forever battling irrational fears. Already inclined to hold their tongue, they can be so apprehensive of rejection, afraid of disapproval, and averse to criticism, that they run away and hide. They need to remember that even a clam opens its protective shell from time to time.