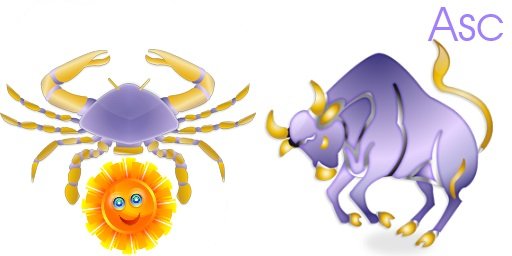 These people are too serious and need to lighten up and be more playful. Sometimes they actually need to learn how to have a good time, because no matter how much money they make, “more is never enough.” Whenever Taurus is involved in any combination, there’s bound to be a great deal of intensity and a need to be more buoyant, and Cancer with Taurus rising is no exception. These folks feel their disappointments too deeply and aren’t resilient enough. With a tendency toward heightened emotions and a thin-skinned sensitivity, their bull-headed Taurus personality can render them angry and unforgiving when they feel they’ve been slighted. Objectivity is the key: Pouty faced Taurus can make for a real sad sack if there’s no ability to see the light at the end of the tunnel. So “lighten up, and move along” should be the name of their game. With sufficient objectivity, these Cancerians can benefit greatly from Taurus’ natural generosity and bottom-line focus. They’re diligent and thorough, never leaving even the most difficult jobs half-finished, always following up on leads and doing everything possible to close a deal. Taurus, the Banker, demands that time and money be invested profitably, that there’s a pay-off for every effort. Coupled with Cancer’s avarice, these characteristics can lead to a limitless appetite for money and power. These people rarely understand that “more is never enough,” and might well be drawn to financial vocations involving banking or brokering. They love the cha-ching of a cash register. But they’re not misers: They willingly share their comforts and show their love and appreciation with material gifts.

Sometimes Cancerians with Taurus rising seem somewhat dull; they appear to have few interests beyond going to work and making money. They’re very demanding people, demanding of others and demanding of themselves, and they don’t like to be disappointed; their Cancer subjectivity often makes them feel as though the pain and frustration of disappointment will never end. Ultimately, they work so hard to make things fruitful that they run the risk of alienating friends and colleagues. But when they lighten up, they’re able to reveal that there’s much more to them than meets the eye. They might be quite the history buff or art collector. They’re in tune with the aesthetics of wood floors and vaulted ceilings as well as the sublime tastes of gourmet dishes.