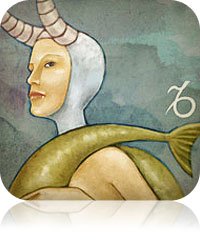 Look around the office and see if you can spot him. No fair sneaking a look at the birthdays in your personnel records. You can forget about that original, creative fellow with the bushy sideburns and the antler tooth necklace. You can also cross off the sport who brags about his pub cruising capers and his candlelight conquests. They’re not Saturn types.

Jolly George, who keeps the staff in a state of perpetual panic with his not-quite-practical jokes, definitely isn’t a Capricorn. How about that busy worker with the reserved manner who wears suspenders and parts his hair in the middle? The one with the quiet socks and a picture of his family in an ostrich leather frame on his desk. He usually comes in a few minutes early and leaves a few minutes late. His head is fastened firmly to his shoulders, and his pencil points are always sharp. The staff calls him “Sir,” salesmen call him “Mister,” and you call him when there’s trouble. Of course he’s a Capricorn.

Who else could you load up with a pile of work that would stagger a horse-but not a goat? He’s your depend­able safety valve when things get snarled and disorganized, and he comes through for you without making a big fuss about it. I doubt if he ever dashes into your office. He walks in, and he probably checks first to see if you’re busy. His clothes and manner are both conservative, and he’s the only one in the bunch who never gets caught with­out his umbrella when it rains. He won’t lose his brief case in the subway, or forget where he left his lunch. His lunch? Naturally. What else do you think he carries in that brown paper bag? Restaurants are expensive. Besides, he hates to tip and fight the crowds.

The last time you saw him flash a bright, toothpaste grin was when your secretary mentioned she didn’t know how the office could run without him. He’s not the grinning type. Or the foolish, frivolous type. He may tell quite a few jokes in his wry and dry way, or take a discreet peek at a pretty girl, but Saturn will never permit him to pull out all the stops. Most of the time, he minds his own business. The Capricorn is more inclined to frown sternly 00 the casual jollities of the gay extroverts than to join them, although his own brand of cynical humor can be hilarious. When he’s in form, it’s hard to top him.

You have to admit he has unique and valuable assets. Your Capricorn employee is the one you sic on the tough, suspicious Internal Revenue man. When the goat gets through with him, he’s not as suspicious and far less tough. He may even be courteous and respectful. It’s not everyone who can successfully intimidate a tax man. Remember that high pressure character who wanted to sell you several hundred dollars worth of perfumed typewriter? After two minutes with your Capricorn man, the poor soul was pressing the down button on the elevator, looking like a fallen souffle.

Somehow, you get the impression your Capricorn em­ployee is going to advance much higher in life, but it’s hard to figure how he conveys it. There’s nothing aggressive or openly ambitious about him. He’s not a flashy, ruthless climber. Let’s try that again. He’s not a flashy climber. In his own mild, inconspicuous way, the goat is coldly determined to get where he’s going. Those who prevent his steady progress or impose on him will soon find he’s no Casper Milquetoast. Hell accept his responsibilities without complaint or resentment, but he won’t be pushed too far. Capricoms with severe planetary afflictions in their natal birth charts can be astonishingly cruel and ruthless. But the average goat simply gives people a grumpy growl and a black look when they tweak his horns.

! Just in case you have one of the exceptions to the rule in your office, I’d better tell you about a Capricorn I knew who worked in a donut shop. He probably had a Leo ascendant or the Moon was in Gemini or Aries when he was born. This goat wore expensive, Italian shoes and big cuff links. He made more romantic conquests in a week than other men do in a lifetime-or said he did. He en­joyed telling off-color stories, and when he wasn’t flirting with the women customers or impressing everyone with his toughness, he tossed off some pretty big bubble schemes and way-out promotions. Most people would never peg him as a Capricorn, but they should look a little closer and listen more carefully.

For all his outrageous flirting, when he called his fiancee on the phone his tone was tender and protective. A man who dared to swear in her presence would never have tried it twice. He made it clear that she was a lady. In front of his parents, he was subdued and respectful. Anyone past fifty he treated with a courtesy bordering on reverence. With children, he was as gentle as Whistler’s mother. Powerful, famous people with status turned him into a humble, worshiping admirer. He was constantly telling friends and strangers that he once sat next to a glamorous movie actress on a plane or about the time he was invited to a reception at the Governor’s mansion. Everything he bought was wholesale, including those Italian shoes. He had the undisputed first prize as the tightest tipper in town. A dollar would never be spent where a dime could be saved. In other words, underneath that false bravado was a typical Saturn nature. This apparently aggressive, extroverted goat turned pink at a compliment and painfully shy in the presence of anyone he thought was upper register. If you need any more proof that he was a Capri­corn, he eventually bought the chain of donut shops. And by the way, he didn’t risk his own cash on those wild pro­motions. It was always somebody else’s.

The typical Capricorn employee is conscientious almost to a fault. If he makes a mistake or commits an error of judgment, he’s miserable. Falling down on his job de­presses him. He’ll come back to the office and work over­time if you need him, but he won’t like it if you make him miss dinner at home with his family too many nights. The goat prefers to tend to his domestic responsibilities first, and return later to the grindstone, if necessary. You won’t find him changing jobs often. The Capricorn decides early what the goal will be, and pursues it with unswerving per­sistence. He is not flighty or undecided about his future. The top of the mountain is never allowed to be obscured by the mist of fanciful dreams and sentimental wishing. Titles usually don’t move him. He’s not seeking glory. He’s after the real position of power: he wants to be the one who guards the fort while the individualists and great idealists are out chasing butterflies. He doesn’t need his name in gold letters on the door to feel important. But don’t fail to increase his area of responsibility at decent intervals, and make sure you pay him enough money so be can keep up with the Joneses. He has to live in the right neighborhood, send his children to the right schools, and his wife has to dress with more taste than her friends. That takes substantial lettuce. The goat will gladly chew on tough leather, pieces of steel and old light bulbs to earn his dessert of green paper lettuce, sprinkled with the caviar of social distinction. His banker may be his closest friend, next to the members of his immediate family.

Your female Capricorn employee follows the same path as the male up that mountain. Nothing sways her from her determination to seek a position of authority in the firm or marry the boss. It doesn’t matter a lot which it is. As long as she comes out ahead. This woman won’t wear two sets of false eyelashes or jangling bracelets to work and you’ll never catch her spinning daydreams at her desk. he lady goat is a Lady. She’ll rarely raise her voice or [ indulge in girlish gossip. There are more important things on her mind than who is having an affair with whom and what Emily said about Marilyn getting back late from lunch. After office hours, she may show a little more curiosity. The Saturn woman sometimes lives vicariously on the details of other people’s romances, but she usually won’t indulge herself in discussing them on the boss’s time. That’s logical enough. The boss may someday be her husband. In all fairness, there’s another reason. All goats S have a serious sense of duty, a respect for their superiors, I and an inner discipline which makes them abstain from office monkeyshines.

Your Capricorn employees of either sex will be business­like. They disapprove of people who are late to work, and who waste time in idle chitchat. They have no patience with methods that aren’t sound or procedures that lack common sense, and they’ll rearrange office systems to make sure the organization runs with sensible efficiency. Not all Capricoms are bankers, teachers and bookkeepers. They also make excellent researchers, extremely capable dentists, brilliant engineers and architects, and they’re clever at merchandising, manufacturing and politics. Many goats are jewelers, ministers, hotel managers, funeral directors, art dealers or anthropologists, but whatever the occupation, they’ll be serious about it.

Don’t forget that there’s a creative side to Satum peo­ple. Your Capricorn employee may have a hobby that could surprise you. He could be a Sunday artist, and a very good one, too. He could be a weekend musician, dabble in sculpture, sell real estate, apply his green thumb to a garden, sing in a choir or belong to a drama class. Culture is close to his heart. So is Mother Earth. His real loves are his family, his home, his work, money, prestige, books, art and music in just about that order. Get an Aries, Leo, Gemini or Sagittarius employee to travel for your firm. Most Capricoms break out in a nervous rash at the sight of a suitcase. Even if it’s not quite that bad, they’ll be happier catching a commuter train than catching a jet. Anyway, who would keep things nailed down while he’s away? Remember what happened when he took his vaca­tion last summer. Someone in the office went ahead and ordered four dozen of those perfumed typewriter ribbons in the rhinestone studded boxes.