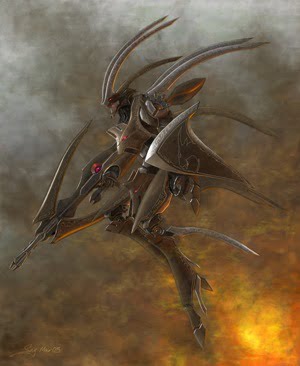 The shadow side of any zodiacal sign is connected with the parts of personality which the individual can’t recognize and can’t express. And you might expect that with all Capricorn’s realism and earthy wisdom and emphasis on the mundane and the practical, all those repressed emotions and dreams and fantasies have to go somewhere. After all, Capricorn is complex and sensitive, and is much deeper than he often appears. So we might call his shadow side the Fanatic syndrome. This particular figure is connected with another one, which we might call End Justifies Means. The scenario goes something like this:

FRIEND: I hear you’re standing for Parliament. That’s really good news. I always thought you ought to pursue a career in politics. What do you see yourself doing?
CAPRICORN: Well, I have some long-range plans. If I can get this seat, then I can begin to get my ideas about cleaning up Soho accepted.
FRIEND: Oh, come now. Why do you want to clean up Soho? I thought you were such a realist.
CAPRICORN: (looking stern and patriarchal) It’s about time this country returned to the good old values of our fathers. All those disgusting pornographic films and prostitutes on every corner and the police can’t even control it….
FRIEND: Oh, surely they don’t harm anyone, and besides, it probably fulfills a useful function. Lots of people need to let out the seedier side of themselves.
CAPRICORN: It’s total self-indulgence, greed, in fact it’s sinful. Why, it’s destroying the family as the basic unit of society. Young children can go and see those disgusting shops where you can buy all those terrible things, and they’re corrupted before they even go to college. I’d shut every shop and close every cinema. I’d arrest anyone who…
FRIEND: I thought we had freedom of speech and press in this country.
CAPRICORN: But it’s for the good of the whole. Oh, I suppose it would ruin a few people who make their money peddling those revolting things, but in the long run…

The Capricornian shadow gone fanatical may have an ace to grind just about anything. When you first hear him going on, you might laugh. Ah, well, silly man or woman, moralizing that way, doesn’t he or she know that you can’t change human nature? But the Capricorn shadow thinks you can. And whether the issue is about sex, or money, or religion, or politics, or just giving you lots of unwelcome advice about how you should run your life, the Capricorn shadow gone out of hand freeze your blood, because it’s like Yahweh in the Old Testament: do as I say and don’t question it. The shadow side of Capricorn isn’t necessarily politically conservative, either: remember that Stalin was a Capricorn too. What it’s really about is that Capricorn, gone over to the shadowy side of his nature, always has a plan to change society, which of course necessitates changing it his way, which of course means there’s no room for dissenters, which of course means you either forcibly remove them or pay them off. Richard Nixon, too, is a Capricorn. End Justifies Means.

The thing that needs changing in Capricorn’s eyes also needn’t be a big section of society. It might be you: the husband or wife, lover or child. And you see the same fanatical gleam in Capricorn’s normally wise and knowing eyes. Get him on his favorite hobby-horse and he’ll tolerate no opposition. Refuse his advice and you’ve permanently offended him. And he’ll often manipulate in the most outrageous way to get you to go along with his plans, because he’s convinced that he’s right and that in the end whatever means he’s used – however unscrupulous – will be rendered tolerable by the results.

The thing is, Capricorn rarely allows his vision or his imagination any scope, because he’s so busy being realistic. He’ll never permit himself any fantasies about what the world might be like, because he forces himself to keep his eyes on what is practically obtainable. Yet he has a powerful imagination and a lot of vision. And it’s got to go someplace. And you often discover that Capricorns have a secret vision tucked away somewhere about what they’d do if they ever got into the big driver’s seat. The trouble is, keeping a fantasy like that locked in the basement for twenty or thirty years has a tendency to make it turn a little funny. It inflates. When it comes out, Capricorn loses his wonderful realism and gets carried away by his own messianic visions. Of course the world, or you, can be changed. And he’s the man to do it. And if you oppose it, well, it’s only your own delusions or foolhardiness or stupidity or whatever that causes you to be so unintelligent as to not recognize the Absolute truth of his conviction.

If you’re not the recipient of his Great Mission, you may be in the position of being the person closest to him who has to listen to what he plans and who is expected to offer every last ounce of your own energy to see that he achieves it. This is where Capricorn’s shadow can often make others suffer, for in a relationship or family situation he is prepared to sacrifice everybody else’s will to his own. Whether it’s his morality or his views on money or whatever his conviction might be, everyone else is expected to go along. This is the Capricorn father who believes – fanatically – that hardship is good for you, and keeps his children on allowance of tuppence a week where there are thousands of pounds in the bank; it’s the Capricorn mother whose stern moral views or social codes are ruthlessly imposed on husband and family; it’s the Capricorn friend who takes it upon himself to interfere in your personal life because he believes it’s really good for you to tell you your boyfriend’s been cheating on you. In short, the Capricorn shadow attempts to bend everybody else’s will to his own, and everybody else’s needs, desires, ideas, and lifestyles to his own concept of how life should be run. And for realistic Capricorn, that’s hardly realistic. Only a deluded fool believes that he can change people’s natures by simply issuing a command. And only a deluded fool believes that he even has the right to do so.

Capricorn, because it’s a powerful sign which usually accomplishes much in the world, has a dangerous shadow. It’s not much more important for the goat to come to terms with his fanatical streak in himself, because he’s always likely to end up in a position of responsibility in some way and usually has other people needing his strong, guiding hand. If he misuses that hand, it’s far more deadly than the little shadow plays of people who have little influence over others’ lives. Tolerance is hard sometimes for Capricorn to learn, because he’s often had to discipline himself and his own needs in a ruthless way to get the goal he’s after. He can’t understand why others aren’t either interested in or capable of applying the same discipline, because he doesn’t realize that their goals may be different, or that they don’t have any goals at all in the same sense that he does.

Capricorn, as we said, is connected with the myth of the Father; and the shadow side of the Father is the tyrant. You can’t be a tyrant unless you’ve blinkered yourself pretty tightly to any point of view other than your own. The recipe for the Capricorn shadow is often a little effort in understanding that different people have different lives to live, different myths to express, and different needs and desires. Capricorn can often benefit from astrology, because it can teach him that there are twelve basic life paths, and not just one. Beneath the suit of armour which Capricorn must don on his journey through an unfriendly and challenging

world, he is as capable of love and devotion as any person. He needs to be able to remember his capacity to love, and also to remember that loving another person means recognizing them, not just guiding them. The Father – whether the figure appears in a man’s or a woman’s psyche – is in his positive form the one who offers support, guidance, wisdom, training in the ways of the world. The Father in his negative form offers support only if you’re prepared to take his advice; he offers guidance only if you accept his views in toto; he offers wisdom only if you recognize no other source for it; and he trains in the ways of the world according to his own image of the world. This kind of Father withholds love if there is no obedience. The root of it is the intense emotional drive which Capricorn so often represses, and which eventually begins to eat away at his usually reasonable thinking processes, making him blind just as he begins to have sight. The more the goat can express his powerful emotional needs in human relationships, the less likely they are to muddle up his vision. And the more he allows himself to relax sometimes, the more he can see that less-disciplined souls are no less worth, but often hold the key to joy in life that he himself may have missed. Then you have a really mellow goat, who can dance as well as climb.