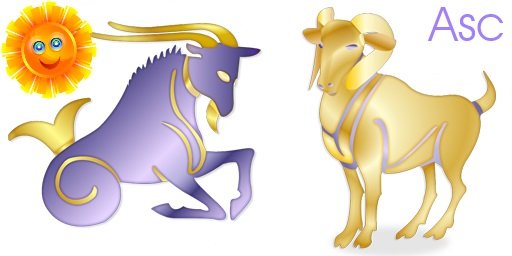 These are the die hard, “get ahead” competitors always muscling up and trying harder. But there’s a bit of a dichotomy between the impatience of Aries’ and Capricorn’s “goes around, comes around” sensibility. Capricorn understands that things take time—and this helps to mellow Action Aries’ restlessness, but there’s still a massive dose of “no time to waste” get-up-and-go and maybe even some “butting my head against the wall.” No one likes to get ahead like these overly competitive characters, so when it comes to staffing their crew, slackers need not apply. These Capricorns avoid sluggish people like the plague; their impatience and intolerance can make for heated exchanges. They’re the sorts of businesspeople who are out on the golf course in the early afternoon—but not because they’re shirking the day’s work! To the contrary: They were at the office before dawn, got things humming immediately, and allocated work to their employees when they arrived. Beyond that, sitting in the office with their feet on the desk just isn’t their style. They can’t sit down, they can’t wait to compete, and they usually hit the road early. They’ve always got to be doing something.

Still, these Capricorns aren’t quick to relinquish information that could diminish their control—so they don’t necessarily “tell all” in the course of a conversation. Sometimes this is wise, but at other times it springs from less positive motives. They need to scrupulously avoid useless and self-aggrandizing competition. They sometimes get preoccupied with the notion that someone’s trying to get ahead of them and snatch their next promotion. If paranoid, they can be rather cruel and might unwittingly end up provoking the perfect assistant to either respond in kind or leave for greener pastures. Turning excellent help into a needless rival is never an effective strategy! So to avoid sabotaging themselves, these Capricorns need to cooperate and encourage rather than uselessly compete. If they’ve learned this lesson, the sky’s the limit.