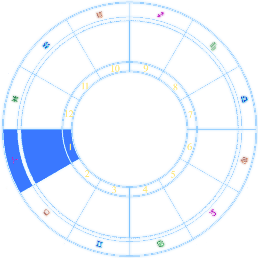 The first house has to do with how we appear or the way we come across, thus our appearance and personality. This is the essential stuff that bubbles up in us spontaneously and that is obvious to others as our trademark or activity. It is what makes us each so personally different. This house rules our personal self and everything about us that draws a reaction from our surroundings or others.

The 1st house shows the result of what we managed to bring across from the world of ideas, plans, and commitments. It’s what remains when our new idea and impulse meet our reality. It is what overflows the status quo. It is a direct indication of how much we are able to accept.

The Wheel of Houses

The chart wheel or mandala of 12 houses can be seen as a circle, or cycle, with each house leading to the next house, and so on, in a counterclockwise direction.

XI-th house from III-rd: Brothers friends, you neighbors and postmen. Contingencies related to the neighborhood, brothers, transport and documents. Originality of speaking and thought.

VI-th fromVIII-th : all that compromise the existence of a will, or a bound. Worms that devour corpses,  carers graves. Forensics. Diseases that result from crisis situations. Sexually transmitted diseases.

IV-th house from X-th: mother of your father. The paternal inheritance. Vocation. Mather of King. End of career: retirement. Secret funds. Family mausoleums and tombs. Father’s house. Aging and end of life of the father. Houses persons in authority.

III-rd house from XI-th: brothers friends, friends of ministers or parliamentarians and small voyages made by this group of people and their correspondence. Literary publications of friends.

II-nd house from XII-th: hidden or illegal profits from secret operations, by large animals, administration of prisons or money earned by those in prisons, researchers, those working in remote places or nursing , programmers, money earned in exile.