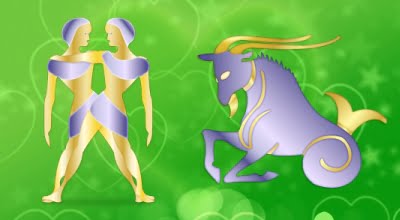 What are these Gemini people trying to do? Where do they stand? Where are they?” cries the honestly puzzled Capricorn, trying to deal with the Twins. “They are nowhere,” answers the astrologer. “They are nowhere, yet they are everywhere. It is difficult to tell, without taking into consideration that each Gemini is at least two people.”

Do you think for one minute that a Goat is going to stand for that kind of an obtuse answer? No way. It’s too ephemeral, entirely too abstract to be a practical solution to the problem. So don’t try astrology on Capricorns whose lives are being tossed out of their orbit of set routine by the antics of a pair of Twins hiding within one Gemini. It won’t work. I’m not sure just what will work, but that won’t work.

You might try explaining Gemini to Capricorn by pointing out that Gemini is an Air Sign, therefore Mercury-ruled people are very much like the wind. The wind is invisible, yet strong. It can be a friend or an enemy. It’s more or less neutral (like Switzerland). Sometimes it will uproot entire buildings. Sometimes it will not. There’s just no telling with the wind – or with Gemini. The wind is free and unpredictable, and it’s impossible to guess in which direction it will blow. It is a question asked only by the foolish; consequently, any astrologer who tries to answer it is a fool. Still, all that won’t cut any ice or slice any pickles with the Goat, who will, after all your trouble, continue to demand which way this particular Gemini’s wind (or hot air) is blowing. Just tell him North. It is blowing North. Then forget about it. Even if Gemini’s emotional wind was blowing South, East, or West at the time under discussion, you can be sure it will be blowing North within a couple of hours. You see? There are always ways to handle these things if you try.

The taciturn Capricorn will not admire Gemini’s verbal gift if it becomes too profuse. Although most Goats enjoy listening vicariously to gossip about the famous (those who have achieved, if only in their own communities), they are seldom inclined to partake of it personally. (Gossip, I mean. They are always willing to partake of fame.) To Saturn, the ruler of Capricorn, caution is the be-ginning of wisdom, in speech as well as in action. Symbolically, Saturn is the planet of wisdom gained through long tests of initiation in many incarnations, traditionally the ruler of the Hebrew culture. Also the ruler of exasperatingly bossy employers, grandparents, anyone in authority, including the government – all those people and institutions tending to get their kicks from saying “NO.” “Absolutely, NO” – (for your own good, of course). “Yes” is a foreign word to the typical Goat.

Capricorns have trouble even pronouncing it, some of them substituting words like “okay” or “I-suppose-so.” I even know a Colorado Goat who substitutes the word “Yippee” (spoken very softly) for YES – an inexplicable habit, but nonetheless typical. So, Cappy does not like to say YES. I think it has something to do with money or financial security. To Capricorns, “no” seems to rhyme more with “dough” – and “yes” rhymes with “less,” especially when it’s spoken without due and proper consideration. Something like that.

This is a 6-8 Sun Sign Pattern, meaning that Capricorn will attract Gemini for a reason relating to mystery, death, sex, reincarnation, hypnosis, psychiatry – or some bending of the mind, even drugs. One of these areas will be involved in a subtle way or subconsciously. As for the reverse, the Goat will always find some useful purpose for the Twins, and often Gemini will end up by in some way serving the slightly selfish Capricorn. Self-sacrifice of one kind or another is bound to be present in the relationship, whether it be within the realm of the family group, business, friendship or lovers. But then, someone has to sacrifice when two people are as essentially different in character as these two.

Capricorns are clothed in an antique and thoroughly elegant manner, such an exalted aura being only proper as the means of radiating the Saturnine wisdom and skill through experience. The attitudes of some Goats almost whiff of mothballs. Most of them despise modern furniture, leaning more toward the traditional, the old, the lasting. Let Geminis pursue the trains of modern thought, deck their homes with plastic and shining chrome. To Cappy, the tried and true seems more sensible. No one can argue the superiority of craftsmanship. I certainly wouldn’t. But Gemini might. The Mercury-ruled can argue on behalf of any weak point and make it seem reasonable or feasible. Except to the Goat. Capricorns are rarely the victims of Gemini persuasion. Oh, it happens, but when it does, which is seldom, Cappies will catch on quickly to the manipulative mental game, sense that crooked psychological dice are being used against them, and back away, determined not to be caught twice with their caution down.

There’s more than a trace of the magnificence and serenity of Nature in Capricorns, something of the mountain goat’s dignified bearing. All this naturally draws the restless Gemini, who seeks repose of the spirit more desperately than is ever shown or admitted. The serious but kindly and gentle Capricorn man, woman or child can supply a stable, calm, and rational basis of emotional security that the Twins find both comforting and necessary, a place to fold their wings between flights. Life moves so swiftly for Gemini, it’s often a frightening blur, and on occasion, they need to have the inner frenzy stilled. Capricorn seems almost to be a resident of stillness, of silent, deep-green woods, and can bring many moments of tranquility to the Twins who stop to rest awhile. With Capricorn, Gemini may study the forms of Life and Love at Saturn’s more lei-surely pace.

There are also lessons Capricorn can learn from Gemini. Innocently self-centered, intellectually independent and curious, Gemini is magically able to temporarily enter the realms of every book ever read, every movie ever seen, every symphony ever heard – to move as naturally and freely in that so-called imaginary world as if it were the kingdom of his or her birth.

Consequently, the Twins can present the Goats with the valuable knowledge of how to be more than just a visitor to the worlds of literature, music, art – for these worlds of make-believe are where they live. Gemini returns to this Earth only by karmic obligation, to re-enter a flesh prison after a long spell of daydreaming on other levels of awareness. Capricorn benefits from this, because it is so difficult for the Goat to comprehend the reality of any place but Earth, Capricorn being so rooted in it, so practical and down-to-earth on both a conscious and a subconscious level.

There are, of course, rare Capricorns whose imaginations flash during a summer thunderstorm, whose spirits wonder and wander on a quiet, star-filled night, who display a pixie sense of humor, understand about psychometry, UFOs, telepathy and the Great Pyramid’s mysterious wonders. But the more typical Goat does not waste time pondering anything which can’t be taken apart and put back together again by blueprint. When Capricorns fly, they make their reservations early, to be safe. When they go by car, they take a road map, to be sure. But there are no blueprints, no maps to guide the astral traveler. Trips out-of-the-body, into worlds beyond the material or the physical senses, don’t require a reservation – only faith.

It must be admitted that Gemini, when investigating other worlds, is not necessarily motivated by faith or spiritual hunger. The Twins are usually motivated by simple curiosity, the kind that killed the legendary cat but doesn’t seem to be fatal to Mercury Birds.

A surprising number of Capricorns satisfy their soul hunger in the Saturn-approved method of becoming involved in art. They sometimes collect it, enjoy it, become patrons of artists – or paint, sketch or draw themselves. Some enter the acting profession or become dramatists. A few follow music in some manner. But whatever the Goat is or does, both feet will remain planted firmly on terra firma, and how far can you swing on a star when both feet are on the ground? It requires a bit of stretching to enter other galaxies. Still, any creative endeavor of any kind is akin to a dawning comprehension of an existence beyond the five senses, bearing a hint of a sixth, even a seventh and more. The ancients claimed that Saturn is a seventh-dimensional planet. We live our daily lives in the third dimension, while Time itself, an eternal Now, as Einstein knew, is the fourth dimension. Surely the seventh must carry a higher wisdom than even Gemini can contemplate. But Saturn guards its secret well, with the usual Capricorn reticence and silence.

Capricorns are inclined to keep their own counsel. Geminis are born and natural communicators. Which is right? Both are – each in his or her own way, as long as neither interferes with the other doing his own thing. Or her own thing. With these two Sun Signs, doing “their own thing” is rare. But the dictionary definition of “rare” gives a choice between “uncommon” …. or “very beautiful. “