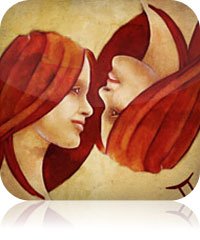 Do you have some employees around your office who talk fast, move fast and think fast? Do they look young and act young, forget about their ages? Are they unpredictable, restless, original and impatient? What a smart man you are! You’ve gone and hired yourself some Geminis.

It’s easy to understand why. With all that charm and guile, not to mention flashing intellect and creative imagina­tion, you probably couldn’t help yourself. Now that you’ve had a chance to watch these Mercury people in action, you’ve learned that they can take an abstract idea and reduce it to a formula better than anyone else in the office. Your Aquarian employee can think in wildly abstract terms, your Aries employee can toss out some red-hot ideas, smothered in enthusiasm, and the Virgos can organize the details meticulously. But Gemini can do all three.

Before you fire those other people, however, remember that the Gemini doesn’t have the intense drive of the Aries, nor the willingness to work overtime. He also lacks the fixed and steady purpose of the Aquarian and he’ll never understand the endless, devoted dedication of the Virgo. We won’t cover the other Sun signs. You get the general idea. Your Gemini employee is not a one-man show, all by himself, even if he is a dual personality. He’ll come closer to it than anyone else, but you’ll need the other workers just the same.

Geminis share with Virgo, Aries, Leo and Scorpio a built-in ability to deal with emergencies. They can meet a crisis swiftly. The typical Gemini will make instant deci­sions and go into action while most of the people around him are still polishing their skis. He’s easily bored with routine, happiest when he’s free, so don’t try to chain him down to the work bench. He’d rather do a stretch of time in Sing Sing than work for a clock-watcher. At least in prison he could turn his curious mind to studying the behavior of the inmates. I’d sincerely like to point out here that the Gemini behind bars is a lonely man who couldn’t find the right niche for his multiple talents in an over-organized, conformist society. Many a Gemini forger or petty thief is basically as honest as the judge who sentenced him, and twice as idealistic. When Gemini is made to feel guilty about his vivid imagination and restless energy in childhood, then constantly criticized by the business world for being too progressive and refusing to fit into stale patterns, his high sense of moral and mental ethics becomes distorted, and he strikes out on the only original path he feels is left to him.

Most Geminis are so glibly persuasive they can talk people into buying things they couldn’t possibly even use. It’s never a mistake to utilize their talents in sales or pro­motional activities. When the Gemini’s silver tongue gets through extolling the virtues of your firm, you won’t even recognize it yourself, even if you’re a blind egotist about your own company. Send your Gemini man out to sell the public, or to wheedle your customers and clients in res­taurants and on golf courses. Or send him on the road to gather up an avalanche of good will and orders for busi­ness. If you must keep him in the office, be careful where you place him. He doesn’t resent supervision as fiercely as Leo or Aries, but he will become nervous and inadequate if he’s confined and unable to express himself. When this happens, your Gemini employee will break his shackles and breeze off to more freedom without an instant’s regret. Now don’t run in and take a hasty peek at his desk to see if he’s still there. He won’t fly away or disappear into thin air until he’s had a chance to tell you his reasons and take his chances of winning you over to his point of view. Unless you hear differently, directly from him, he’s probably as happy as a winged messenger from the gods could be here m earth, doing whatever it is you have him applying his agile mind to. If there’s an office pool of any kind, you may see your Leos, Aries and Sagittarius people doing lots of showy betting, but you can bet your old Brooklyn Dodgers button hat it was probably masterminded by one of those streaks )f lightning you employ who was born in June. The Gemini von’t throw extravagant sums of money into a complicated mbble scheme as readily as Leo, the lion. He’s more likely :o” risk his security in a situation where there’s a challenge o his wits, where there’s fast action and a quick return. His conversation will be full of phrases like “Let’s give it i spin,” “It’s worth a flyer,” and “I’ll try anything once.” And he will, too. Try anything once, that is. Twice is out.

He’s bored by then.

Your Gemini employee may be conspicuous by his absence or absent-mindedness (same thing), during base­ball season or golfing play-offs. Most Mercury people enjoy these sports, and many of them have participated, thanks to the uncanny Geminian dexterity. There’s little he can’t do with the synchronization of his intelligence and his clever hands, and that can include calculating precisely how to swat a white ball over the fence or making a hole-in-one on the green. Sports often attract him as a way to work off all that nervous energy. In the long run, however, the Gemini prefers to exercise his wits and give his mind a workout, so he can bat plenty of home runs for your firm. Still, he should be encouraged to engage in physical activity. It will wear him out so he can sleep. All Geminis are prone to insomnia. Many Gemini employees who work in offices where they’re required to be on the job early in the morn­ing can be recognized by the circles under their eyes.

Your Geminis will keep the office humming with busy activity, lots of jokes and gay chatter. But they’ll get things done. The Mercury secretary may be the fastest typist in the crowd, and quick to catch your dictation. Normally, if she’s a typical Gemini, she’ll be able to form an intelli­gent, clearly-stated letter with just a hint from you about the subject matter. In spite of her secretarial talents, you might be better off to put her out in front where she can charm the people who walk in the door and run the switch­board for you. (Doing two things at once and juggling them expertly is no problem for a Mercury girl.) You’ll have fewer disgruntled people calling you. Not only will she sweet talk strangers cleverly, she’s not apt to scramble the cords and cut you off in the middle of a call to Kalamazoo to connect you with Katanga.

I’d better warn you not to discuss raises, bonuses, com­missions and such with a Gemini, if you can possibly help it. Use a stem Capricorn or a dogmatic Taurus or a no-nonsense Virgo as your middle man. If you don’t, the Gemini may talk you into giving him a higher position with the firm than you have available without firing your wife’s brother and twice as much money as you make yourself. He’ll make it all seem perfectly logical. It’s much safer to avoid financial huddles with a persuasive Gemini. If you’re game, go ahead and try it. But you may come out of the huddle having promised him a weekly expense account that would support a couple of Virgos and Cancerians for a year.

You’re likely to trip over a few broken hearts in the office hallways when you have Mercury employees. A flirta­tion or two a month and a rather fickle way of changing his mind is the average behavior before maturity. There’s a youthful air of irresponsibility about many a Gemini (unless the natal chart indicates a more stable nature). He has a mind at least a million years old, and the emotions of a teenager. He’ll look like one, too.

The truth is that the Gemini, like Peter Pan, hates to grow up. And like Peter, he needs a Wendy as smart as he is to clean house for him every spring, letting him come and go as he pleases. If you’re the kind of boss to play office Cupid, don’t introduce him to any other kind of girl, or you may have to loan him money to pay his ali­mony shortly afterwards.

Do you want to make your office really swing? Put your Aries employee and your Gemini employee together in a room to discuss a new project. Then stuff some cotton in your ears to protect them from a sound like one hundred adding machines and two hundred ticker tapes all going at once. Stand close by with a big, strong net to catch all the pink balloons that will be flying through the air. Gather them up, take them in to your office, and study them care­fully before you stick a pin in them. One of them is likely to contain a million dollar idea.