Sometimes it was dark and sometimes light, and now they were very cold and again too warm. 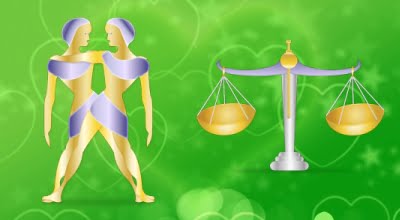 Two Air Signs are fun to watch, like trapeze artists at the circus. Their mental gymnastics can be both dazzling and dizzying. Air is intangible, invisible, always moving everywhere ….. and nowhere.

Since Librans can never make up their minds, and Geminis are continually changing theirs, it’s hard to know what to predict will happen in an association between them, whether they are relatives, husband-wife, friends, business partners, lovers, mates, or what-have-you. Whatever I write may change before it is read or comprehended by either. But I’ll risk it, and state that Gemini and Libra constitute a 5-9 Sun Sign Pattern, which usually balances out favorably, no matter in which direction the Libra Scales are dipping, and no matter which one of the Twin personalities of the dual-natured Gemini wants to argue about it.

Lest the sharper, birdlike, alert and calculating Geminis should believe that Librans are nothing but puffy white clouds, I’ll remind them that Libra rules China, therefore the Chinese. Since Orientals are the most mysterious people on the planet, it’s a mistake to deduce that there’s nothing behind Libra’s bright smile but soft marshmallow fluff. Of course, that won’t intimidate any typical Geminis (who are experts at working Chinese puzzles). So I’ll try to warn the Twins in another way. Libra is a Cardinal Air Sign. Gemini is a Mutable Air Sign. Cardinal means leadership. Mutable means communication. A Gemini can communicate beautifully over the airwaves with Libra as long as he or she does not try to lead the discussion or win the argument.

Remember, Libra is Cardinal. Libra must win. Libra must lead. Libra is logical. Libra must always be right. And don’t let that lollipop grin, those adorable dimples in their chins, and elsewhere, cause you to think otherwise. These are merely weapons to help Librans get their own way. When they can’t do it with their superior intellect, deductive reasoning process, or that oily-smooth voice that sounds like violins blending with harps, accompanied by whispering angels, they will bat those wide, innocent eyes, flash the Venus smile, dimple a few times – and the opposition simply melts away.

Who can resist such a combination of beauty, grace, charm, logic, intelligence, brilliance, and flattery? Gemini can – and frequently does. Gemini is not easily taken in by Libra’s coaxing con-artistry. After all, persuading, conning, coaxing and tricking the timid, with a blend of charm and wit, was invented by Geminis. The Twins come first on the zodiac wheel, Libra follows later so Gemini invented the game, Libra only imitates.

I’m sure all Geminis will agree with me. As for the Librans, I have no intention of arguing the point back and forth, and up and down, with them. Instead, I shall sweetly urge the Pollyanna-perfect Librans to bear with me while I continue to tangle and snarl myself up verbally, trying to sort out the differences between them and the Twins.

Air has no particular shape. It just floats around through space, like an interpenetrating ghost. Therefore, when these two Sun Signs team up at home, in the office, on the campus, or anywhere else, it may be difficult at first to see them. It will not be difficult to hear them.

Gemini and Libra will have lengthy discourses on every subject imaginable, and they both have immense imaginations. Sometimes the discussions are friendly, sometimes not. But they will usually remain on speaking terms, since silence for anything but the briefest periods of time is well nigh an impossibility for both of them. These people do like to talk. Neither of them likes to listen.

The reason Libra is symbolized by the Scales is because some Librans have minds so delicately adjusted that no sooner does an idea enter than a contradictory idea is automatically suggested. Can you conceive what it would be like to be cursed with such a mind? Someone says HOT, the computer card flashes COLD. Someone feeds in LONG, you pop out with SHORT. If you hear FAST, you instantly think SLOW. If you hear SLOW, you think FAST. You feel UP, you look DOWN. You feel DOWN, you look UP. Are you still there? Sit down and close your eyes for a moment. The dizziness will pass. Now do you understand why so many Libra people walk around with a dazed look on their beautiful, evenly matched features and a faraway expression in their lovely eyes – half the time? The other half of the time they are doing the exact opposite – staring at you alertly and intently, agitating their air essence into a tornado or making eloquent, impassioned speeches. That’s the way it goes (comes!) with these teetering-tottering souls; whatever occurs, they must immediately accentuate the opposite.

In Colorado there is a Libra man named George. One day I was explaining to him certain events in my life which caused me to suspect I was the object of disapproval from a hopefully now extinguished branch of the government, and had been thus persecuted, in subtle ways, for nearly three years. He listened to my brief summary, then dimpled, saying, “I have no doubt that the events which have occurred in your life for the past several years have a sinister basis in provable facts. However, on the other hand, you are a writer, and possess a vivid imagination, so it is entirely possible that the whole thing is actually innocent.”

Libran George was not even aware of his own thought process. Now that you have been astrologically initiated and instructed in how the Libra mind works, you can appreciate that no sooner did the word “sinister” pop into his head than his Libra Scales popped up a computer card reading “innocent” – the exact opposite of “sinister.” This is the common Libra dilemma. What is truth? Which word should be the final answer? Sinister? Or innocent? The trauma of indecision. Being an Aries Sun Sign made this particular matter quite simple for me. Sinister. The incidents were based on a situation that was SINISTER. However, you see, as a Ram, knowing that they are now behind me, I have dumped the events into yesterday’s trash and am no longer concerned. Geminis do the same thing. Toss away yesterday, enjoy the present, and don’t recognize tomorrow until it is here. Libra cannot. What if the summary was wrong? Although, of course, it could have been right. But if it was wrong, and thrown away, how recover it to make it right? Sinister or innocent? Bad or good? Real or imaginary? Positive or negative? Polarities, polarities, polarities! Libra is enmeshed in them from morning till night – and dares not discard them, for fear of discarding the only fair conclusion.

Unlike Libras, Geminis juggle polarities and contradictions, not in sequence, but simultaneously, constantly synchronizing their dual thoughts within their Twin selves. Why not? There are always two of him (or her) to handle anything. You can see why these two Sun Signs are not the most reliable people on Earth. If you catch Libra when the Scales are perfectly balanced – fine! If you catch Gemini when he or she has put one Twin to sleep and is displaying only the other for the moment – fine! But most of the time, these two, or three, or four, make quite a crowd. Despite the similarities in the natures of these two Air Signs, there are also a number of ways in which they veer off into different directions. Like making decisions.

Gemini decides quick as a flash, and that’s it. No regret, no anxiety, no waiting or wondering – action NOW. Libra balances, weighs, judges, ponders, puzzles, assimilates, and postpones action till tomorrow – and sometimes tomorrow never comes. To Gemini, not making a decision can cause the race to be lost. To Libra, making a decision can cause a terrible mistake, and Libra cannot, will not make a mistake. It must be noted, however, that once the swift Mercury-ruled Gemini has decided, it may mean absolutely nothing. There could be a change of mind and plans minutes later. But once Libra has finally decided, after the delicate balancing act, he (or she) will normally stick by the decision firmly, knowing there are no improvements to be made that haven’t already been carefully weighed. Libra is more cautious than Gemini. While the Twins tend to cut ties hastily, Libra never believes in cutting what may be more prudently unraveled, thread by thread. Why make a rash move, when you might subsequently be forced to retrace your steps through the discovery of a failure to take into account some fact or other which was not then known?

Geminis love a mental challenge, and Libra gives it to them. But when the Twins try that Mercurial double-talk on Libra, it doesn’t always put them ahead. It can put them somewhere in the middle, occasionally even shortly behind center.

The childish charisma of Gemini can cause the Twins to do very fey and magical things, like speaking the name of a druid twenty-seven times when a star is falling hitching imaginary rides on the backs of friendly squirrels and grasshoppers and looking for diamonds among roses blooming in the snow.

Libra doesn’t normally care to waste time with such nonsense. In direct contra-diction to their optimistic sweetness and their cheerful, sunny-yellow-beaming faces, they are coldly logical.

But there you are again! When you image one face of Libra, it will be fed back to you, through the polarity mentality of the Scales, as its opposite face. What Librans seek is the Golden Mean. Gemini doesn’t care at all for the Golden Mean of arriving at a perfect balance. It is the traveling itself, not the destination, that the Twins enjoy. Both Gemini and Libra would be happier with themselves, and with each other, if they would try feeling much more and thinking much less.