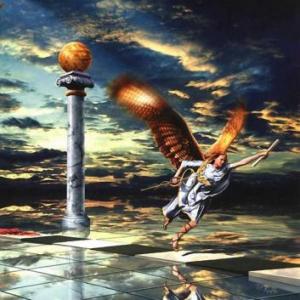 The most famous twins in our mythological heritage are Castor and Pollux, the sons of Zeus who were hatched from an egg laid by Leda after she mated with Zeus disguised as a Swan. That tells you something right away: Gemini is half-bird anyway. From the soaring seabird to the mimicking parrot, Gemini has a lot in common with our feathered friends.

Now, Castor and Pollux are a most peculiar pair of twins in myth. This is largely because, although both are brave and clever warriors, one of them is human and one is divine. When one of them dies, the pair is so close that their pleas finally reach the ears of Zeus, and he makes a deal with them. (Geminis, by the way, have a real talent for making deals.) They’re allowed to alternate their immortality. While one is spending a little holiday on Olympus with the gods, the other gets a turn being a mortal man on earth. Then they change places. It’s sort of like foreign exchange students at university. And each time they change they get to spend a little more time together, to exchange notes.

This myth, playful as it sounds, gives us a lot of insight into the deeper meaning of Gemini. There’s often an awareness of a highly spiritual and ethereal kind in Gemini. I mean spiritual here not in the ordinary religious sense – which is often anything but spiritual – but a kind of delicate tuning to a transpersonal or different realm of consciousness. Many Geminis show this in a very finely developed intuition, which registers all sorts of things at a nonrational level which can be deeply distressing to the more intellectual and rational side of the person. Also, I don’t mean spiritual in the sense of séance parlours and spiritualism. It’s a feeling of another, higher world. Gemini has a sense of the eternal, at the secret currents at work in the fabric of life. It’s part of the reason why he often doesn’t take life or life’s responsibilities that seriously. Something deep within him knows that isn’t all there is to it.

The trouble is, those perceptions aren’t consistent, and they also aren’t welcome. As the myth tells us, one twin dwells in the heavenly realms while one stays on earth. They aren’t both in one place at the same time. Often Gemini’s intuitions clash violently with his more carefully structured, analytical mind. Often he’s a stranger to himself, not knowing whether he’s a scientist or a mystic, an artist or an intellectual. Sometimes he tries to forcibly block one of these twin sides of himself from expressing – and it may be either one – and causes himself a lot of anguish in the process. Gemini’s alternations, his periods of light and dark moods, of extroversion and introversion, of vision and analysis, are curious to him as well as to others. Which one is he? Both, of course. And somehow, during the course of his life, he needs to learn to translate what goes on in one realm to the language of the other. They’re both reality for him. It’s like an alternating battery current. Sometimes he’s really in touched with his own inner Self, and then he shines and it’s like the sun coming out on a spring morning. He’s the beautiful butterfly, the eternal child, the sparkling one who brushes gold dust on each thing he passes. Then suddenly, he’s alienated. He’s no longer on Olympus, but stuck on earth, in a mortal body. Life is a little bit bitter and sometimes dark and mocking, and he’s liable to get cynical and unpleasant, and thinks a lot about death. He goes away to brood, because the connection has been cut and he’s only mortal after all. And his mortality, the fact that he must grow old like everybody else, weighs heavily on him.

You can’t interfere with Gemini’s cycle, or expect him to change it. He needs his period of collision with mortality just as he needs to breathe the scent of the Olympian heights. This cycle is his alone, and you’re very foolish if you think he’s doing it against you or because of you. More sensitive souls like Pisceans and Scorpios and Cancers, can be hurt and feel horribly rejected when Gemini is going through one of his dark turns. He can be pretty nasty and chilly while it lasts. But it isn’t personal.

This alternation in Gemini can be described in another way. You might say that it has to do with a polarity in him: intellectual and emotional, or male and female, or conscious and unconscious. One is human, the other is divine. Often Gemini becomes confused about whether to make a rational judgment or an emotional one. Sometimes he gets into a lot of sexual confusion as well, because there’s quite a bit of both sexes in him – whether it’s a Gemini man or a Gemini woman – which isn’t a reflection on his sexuality, but really means that he’s both intuitive and rational, sensitive and decisive, reflective and outgoing. Masculine and feminine in Gemini are meant here in their broadest sense, and a lot of Geminis are pretty confused about which role or image to play because they discover both in them, and relate to both men and women equally well.

All this makes for pretty inconsistent behaviour. Sometimes it helps if Gemini can at least differentiate when he’s being Castor and when he’s being Pollux, and try getting them to talk to each other. You’ll often hear Gemini talking to himself anyway. Well, of course. There are two of him, aren’t there? One moment the world is shining and full of light, the next it’s dark and imprisoning. It’s one of the reasons why Geminis are so good at reporting and writing and dealing with the public. They’re acutely sensitive to both faces of life, and are usually well-stocked with both idealism and cynicism. They see both and are both.

There is another mythical image which is important to consider if you want to understand Gemini. The planet which rules the sign is Mercury. Now, Mercury is the smallest and fastest planet in the solar system – in itself a good symbol for the speed and mobility of Geminian perceptions. In mythology, Mercury is the messenger of the gods. He carries messages and information from one god to another, and from the gods in Olympus to men on earth. He is also known as the god of thieves and liars, the protector of the roads, and the lord of commerce. Get the picture? He’s an amoral god, fluid and flexible, and concerned always with bridges between gods and men, between man and man, in the form of ideas, money, channels of communication both tangible and intangible.

Mercury is also known as Mercurius in the medieval symbolism of alchemy. And this tells an important thing about Gemini. Mercurius, as the alchemists try to describe him, is the symbol of the process of understanding, of connecting, of integrating. When you suddenly realize something or understand it, and the light dawns, and two things suddenly click that didn’t have any relationship before, the alchemists would have said that was the trickster spirit Mercurius at work. Remember those cartoon strips where somebody gets a bright idea and it’s pictured as a lightbulb suddenly flashing on over his head? That’s Mercurius. In alchemy Mercurius connects male and female, and allows the Great Work to complete its transformation of substance. He’s called the Great Transformer, and is pictured as being androgynous, male and female both. He’s the one who bridges the opposites. Bear with us. It may be esoteric, but it’s important. For here is the key to Gemini’s real path in life, the thing toward which those with the sun in Gemini are really striving. It’s the interpreter, the translator, the messenger. But to perform this work of intermediary, Gemini must first find ways of bridging the opposites inside himself. He needs to be able to accept both the male and female in himself, the mind and the emotions, the spiritual and the material, the light and the dark. For much of his life, Gemini often wanders in a split and dissociated state, trying first one opposite and then the other, before he learns that he can be both. If you stand in the middle between two struggling opposites, you notice that what you thought was conflict really isn’t. It’s complementariness, one thing helping and supporting the other, rather than being mutually exclusive. Opposite things aren’t really enemies at all. They’re part of one holistic view of life. And that’s what Gemini is really after.