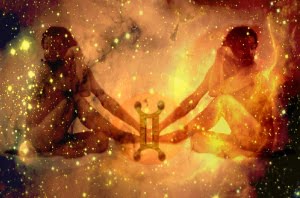 What kind of shadow does the god with winged sandals cast? Well, as you would expect, there seem to be two distinct Geminian shadows. Some Geminis display both, and some only one. The first we will call the Irresponsible Child syndrome. The second we’ll call the Plotter. The first one we can illustrate with an actual dialogue which took place between a friend of mine and a Gemini at a party.

GEMINI: Anyway, let me tell you my views on how this country should be run. First of all, I’m really opposed to the materialistic society. I think people have got their values all mixed up. All they’re after is bigger houses and bigger cars and more furniture, and nobody cares at all what happens to his fellow man. I think we should return to individual self-sufficiency.
FRIEND: By the way, what do you do? (Noticing the expensively tailored shirt and the large solid gold ring.)
GEMINI: Who, me? Look, I don’t want to talk about me. When people ask you that at a party, they’re really saying, ‘How much money do you make?’ We were talking about what’s wrong with society. If you really want to know, I do a bit of songwriting, and that sort of thing.
FRIEND: But how do you support yourself, since you’re opposed to the conventional lifestyle of working an ordinary job?
GEMINI: Oh, I manage. I just hate the sort of mentality that goes to work from nine to five, and takes out a mortgage, and gets all hung up with the bureaucracy of society’s rules and values. By the way, can you give me a cigarette?

The punch line is that last question. Our friend, shadow-Gemini, having waxed eloquent about what was wrong with the materialistic world, then genuinely expected my friend to generously give something which she herself had worked at one of those dreary nine-to-five jobs to pay for. She refused. Our shadow-Gemini was outraged, and immediately classified her as a selfish, materialistic philistine. That’s the Irresponsible Child: like the god of thieves and liars, our Mercury-ruled shadow here wants to only have the divine twin, and dispense with the human one.

The Plotter, in a sense, does the reverse. He can’t find his divine twin; so he feels terribly isolated and rather neurotic most of the time. He can’t connect with himself, so he feels disconnected. You get this kind of typical scenario:

NEW GIRLFRIEND TO GEMINI: I don’t know much about you. Tell me about that place you come from – Penzance, was it?
GEMINI: Oh, you wouldn’t know it, it’s just a village. Look, I must run out and get a morning newspaper. (Later)
GIRLFRIEND: You mentioned something about a contract. Look, what is it that you actually do? I’m really interested.
GEMINI: Oh, that, it was just a contract. Do you think we can go see Nosferatu tonight? I hear it’s supposed to be really spectacular and I love Herzog’s films.
GIRLFRIEND: (beginning to feel slightly uneasy) But you didn’t answer my question.
GEMINI: No. Quite right. I didn’t. I’m just watching your reactions. When I don’t tell you something you get pale and nervous. I wonder why you want to know so much.
GIRLFRIEND: Know so much? I just want to know something about you. Look, we’ve been going out for six weeks. I have a right to know.
GEMINI: Don’t use that word right. No one has the right to know anything about anybody. If I choose to tell you, then that’s my privilege. I suppose you’re use to extracting information out of your guys, so you can control them. Well, you won’t get any from me. I know that game. Why don’t we just go to the film, all right?

The Plotter is Gemini’s paranoid shadow. He’s a plotter not because he plans things against others, but because he’s convinced everyone wants something from him, and he works out long convoluted ways of not giving it, whatever it might be. His characteristics are chronic evasiveness and often chronic lying; and he’s also been known to deliberately try to trap you while you’re attempting to pry into his secrets, so that he can justify the fact that he’s busy hiding. This is a really difficult face of Gemini to deal with, and it stems from his sense of emotional alienation. Because he has a problem relating through feelings, he often can’t trust; and he’ll deny even the simplest confidences to another person because he’s convinced that, if you know to much, you’ve got control of him. Gemini at best is playfully evasive, and doesn’t like a lot of prying and probing. Gemini fallen into his shadowy side is extremely difficult, because he’s capable of being extremely hurtful and using the pointed darts of his nimble tongue to shame you into silence when all you were doing was showing interest. And when the shadow side of Gemini surfaces, you can’t take anything he says literally, because more likely than not it’s meant to be a red herring so he can go on concealing something which he doesn’t understand.

With both sides of the Gemini shadow, the same difficulty lies at the root. It’s the problem of the opposites, and of finding a way to live them both. Gemini, when he’s lost in his divine child side can be charming but a hopeless sponge on others’ money and time. He takes for granted the fact that he’s entitled to Special Exemptions. As he gradually comes to realize that he must also live in the world and submit himself to boundaries and responsibilities, he grows and changes, and can bring some of his lighthearted trust in life into everything he does, brightening the lives of those around him. When Gemini is lost in the earthbound side, he fears life. He often tries to analyse it to pieces in the hope that he’ll be spared from hurt, and develops a profound mistrust of other people’s motives. He loses his sparkle, and simply becomes cunning. As he gradually discovers something worth loving inside himself, something that makes him unique and different, he can open up a little, because he doesn’t feel so horribly vulnerable. And whether he’s your local newsagent or John F. Kennedy, another Gemini, he will have managed to hold the bridge between two realms so that others can come across and taste a little of both worlds.