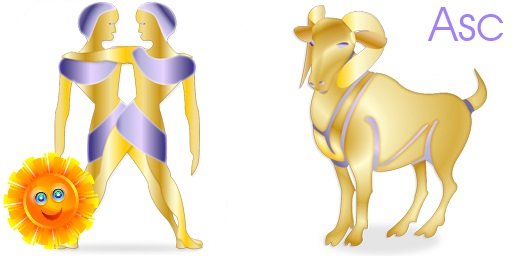 Here’s a childlike conversationalist who probably talks faster than anyone you’ve met in weeks. They’re full of ideas and questions, and they’ve an unusually disarming charm. We open up to them because they’re interested in everyone, and very non-threatening. Their honesty is second to none: They tell it like it is—or at least how they see it! They might display a lot of willy-nilly, but chances are they really didn’t miss anything. It’s just the flit-around impression they leave. Geminians with Aries rising are straightforward, trustworthy, and on the move, with no time to waste. However, there’s a nervous impatience here that can waste a lot of time and energy without accomplishing much; they love being on the move and need to avoid becoming mindlessly “busy dizzy.” They feel sinful if they sit down to relax or just do nothing. They’ll “do it now and think about it later” until their eager beaver earns them a righteous reputation for doing more than their fair share, time and time again. But their patience level wanes, to say the least.

Geminians born in the wee hours need to think before they speak, so as not to put their foot in their mouth. They’re honest and usually charming in their innocence, but ideas that are extremely superficial and not well thought-out are sometimes better left unspoken. An Aries personality is likely to go charging in where angels fear to tread, so these urgent-minded Geminians need to think things through and look for the bottom line before they jump to conclusions. Heaven forbid they come off as willy-nilly nitwits when they’re otherwise so charming and adored!

Your Sun sign is Gemini, which means that it is only when people know you well that your Gemini traits become obvious. They may be different from your outward appearance, which is influenced by your Ascendant sign.
Your Ascendant sign is Aries, which means that, at first glance, people feel the influence of Aries on your outward appearance It may be different from your inner self, which defined by your Sun sign.