Off we skip like the most heartless things in the world, which is what children are, but so attractive …. we have an entirely selfish time; and then when we have need of special attention we nobly return for it, confident that we shall be embraced instead of smacked. 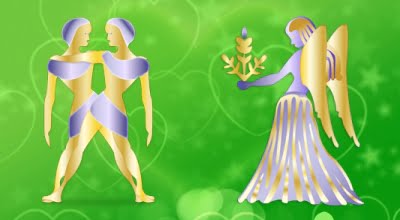 The playful Gemini Twins may, indeed, seem like heartless children to the more sensible and serious Virgos. Always out chasing cobwebs and mirages, jumping about like grasshoppers, getting caught in summer brainstorms and trying to be in two places at once. To the typical earthy Virgo, Gemini’s quick changes of both heart and mind are clearly flaws which need immediate correction.

Perfection is not a quality Geminis enjoy cultivating. They do appreciate, perhaps even admire – and certainly need – the more stable attitude of Virgo, and are often relieved to find the Virgo relative, friend, business associate, lover, or mate still there, in the same place where they were left, when Gemini flew away for a few hours (or weeks or months or years) to see what was happening on the other side of the mountain. But if they are going to be scolded when they return, they’ll just skip off again. Children never like scolding. And all Geminis are essentially children at heart. Not Virgos.

Virgos are possessed of a heavy sense of life’s duties, and a mature sense of reliability. They either live up to this essence of their Sun Sign or they feel guilty about not doing it and develop hives, ulcers, or hiccups. Conversely, Gemini seldom feels guilty about anything. At least, not where it shows.

With Virgo, most everything shows. Especially secret, nagging worries.

Since Virgo rules the bowels, intestines, and solar plexus, these nagging worries, expressed first in a slight frown, then tight lips, can cause actual infection or dis-ability in these areas. The more secret the worries, the more apt they are to manifest into nausea, indigestion or constipation. These people should get it out in the open more often, talk about it, express themselves, say what is on their minds (but not too often, or they would be untrue to their Sun Signs).

Gemini is an expert at getting it out in the open – except for those unfortunate Geminis with a Virgo Ascendent or Moon, who would love to cheerfully chatter, and scatter ideas, but who settle down into an uneasy silence instead, staring at their fingers and counting the lines in the palms of their restlessly folded hands. It can be a real conflict. Most Geminis, however, could profitably teach Virgos how to excel in gregarious gab, gleeful glibness and scintillating syntax. Virgo indisputably knows how to spell all those words, but putting them into action is another matter.

The Virgo intellect is as sharp as Gemini’s (thanks to Mercury, who likes to pretend rulership of both signs, with his silver cap and winged heels) but not as vacillating and changeable (thanks to the hidden influence of Virgo’s true ruler, the as yet unsighted, thunderous Vulcan). Geminis quickly juggle thoughts and create ideas, often it seems right out of the air, which is their natural element, but Virgo seldom juggles or creates. The Virgins are too busy discriminating and distinguishing and sorting facts from fancies, frequently with what may appear to be quite unnecessary preciseness. Explorer-experimenter Gemini seeks the spirit of the law. Purist-statistician Virgo follows the letter of the law.

Most Virgos find it difficult to grasp the concept of a dollar, because it contains such a fascinating number of pennies. They get sidetracked counting all the coins, believing that if you keep track of the bright coppers, the folding green paper will pile up all by itself, with no help. Gemini thinks in larger sweeps, grander terms, and normally tosses any spare pennies into wishing wells, without counting them. Throw a perfectly good penny into murky water for some silly superstition? There goes that faint Virgo frown again – see it? Just beginning to crease in the forehead over those clear, beautiful eyes.

Now that you understand some of the obvious difference between these two Sun Signs, you can imagine the turmoil which must chum in the breast of a Virgo with a Gemini Ascendent or Moon – or a Gemini, with vice versa and likewise. To face such a methodology variance with a strange companion is abrasive enough, without having to face it in the mirror every morning, lurking within your own character and personality. Send them lots of sympathy cards. Some, as mentioned elsewhere, become human alarm clocks – others sit on a seesaw of indecision, ill at ease when they are talking and twice as uncomfortable when they are silent.

The Gemini-Virgo association is influenced by the 4-10 Sun Sign Pattern, so the relationship between them will never be based on pure frivolity and escapism. Seriousness and respect (or lack of it) will weave in and out of the connecting links between these two, each finding it difficult to fully comprehend the true goals and basic outlook of the other. This must not be taken to mean that they can’t create harmonious warmth together. It’s just that happy firesides and hearths need lots of stoking with the coals of mutual understanding and tolerance. Peace and compatibility can eventually be accomplished with a little effort, however, because there’s often a subtle exchange of loyalty and affection hidden beneath the surface disagreements of these two.

It must be admitted that the average Virgo man or woman does not practice provoking trouble, and does not usually respond to it quickly either, unlike the Geminis, with their constant stirring up of a tempest from a single breath of choppy air, and frequently reacting in hurricane fashion to what seems to them to be constant, critical carping and harping from Virgo. Of course, to Gemini, a quarrel is not really a quarrel, merely an intellectual encounter. With Earth Sign Virgo, arguments go deeper, and the hurt lasts longer. The friendship and other relationships between them can be enduring, in rare cases even intimate, but a community of interests on the business or intellectual level- or in the family or duty-obligation sphere, as with all 4-10 influenced people – is normally what pulls them together in the first place.

Most Virgos seem to be humble and self-effacing, seldom displaying any excessive dignity or pride, yet it would behoove the Gemini to hold his or her sharp tongue at crucial moments, since Virgos are usually quite sensitive about what little dignity and pride they do possess. The more aggressive signs can’t understand the Virgin at all, but the Gemini who finds Aries too exhausting, Leo too arrogant, and Scorpio too aloof may very well find the usually sweet and courteous Virgo relaxing to be around, and feel a sense of relief at the lack of need to compete that might be necessary with another Sun Sign.

There’s a touching and attractive humility about Virgos, a personal modesty that excites little envy or resentment. But Mercury Birds can still get their feathers a bit ruffled when they learn that, although Virgo may never be able to run as swiftly as Gemini and may seldom beat the Twins to any Grand Prizes, Virgo sometimes manages to grab the plum job without even hinting for it, let alone racing for it. Often those with Virgo Sun Signs, Ascendents, or Moon Signs are chosen as the compromise candidate by party leaders in “smoke filled” political back rooms on a city, state, or national level, considerably upsetting the more extroverted Sun Signs, who have been blissfully charming the voters out front, confident of victory, until Virgo comes up from the rear – the dark horse chosen suddenly and unexpectedly over the brighter ponies on the track. As an example, Lyndon Johnson was a Virgo, chosen by a clever and canny Gemini, John Kennedy, for calculated reasons.

In any dispute between Gemini and Virgo, Gemini will nearly always win the main point, being faster on the draw and quicker with the cinching retort. But winning a quarrel can’t settle everything. It may not settle anything for Virgos, who know that what appears to be an absolutely factual statement can still be full of errors and misleading insinuations. The greatest talent of all Gemini Twins is the fascinating ability to twist truth and falsehood in such a way as to weave them together and make each appear to be the other. It fools almost everyone but a Virgo. A Gemini Volkswagen salesman who ticks off too many facts too fast can really “bug” a potential Virgo customer right off the lot. You won’t find many Virgos playing speed ball at carnivals or riding the Ferris wheels and carousels on which Geminis love to spin in their circular direction. They don’t go much for Mercurial cotton candy either. All sugar and air – no nutritional value whatsoever.

There is an appealing magical quality in Gemini that attracts and excites the more timid Virgins, and this could create enough mystery to make the relationship permanently intriguing. The trouble is, Virgos are never satisfied until they discover exactly how the magic trick is performed, and the whole point of Gemini’s existence is to prove something by nothing – to make reality out of pure illusion.

To the practical-minded Virgo, reality can never be illusion, nor can illusion ever be called reality. That’s just more Gemini double-talk. Mercury Birds have usually flown and flitted through a dozen occupations by the time they’re thirty, while Virgos are often disturbed when they’re expected to make a slight change in office routine. As for changing jobs, that’s something Virgos normally do with as much serious deliberation as is required for the selection of the President of the United States, in fact, with much more serious deliberation than has been the case with the latter in recent years.

Despite their differences and the tensions engendered by the soul-testing tugs of their squared natal Suns through the difficult 4-10 vibration, Gemini and Virgo share a lovely curiosity, an uncommon intelligence, and a certain charming and graceful manner, which allows them to skip happily, side-by-side, through the cornfields of the changeable land of Oz for a few thousand miles. But if they expect to still be together when they reach the presence of the Great Wizard (who is, of course, a Gemini), they may have to adjust and compromise now and then.

Gemini magicians, who are fascinated by all forms of marvels, should re-member that the Tin Woodsman who strolled along the path with Dorothy and her friends was a Virgo – a kind and gentle, yet lonely soul, wistfully searching for a human heart. And it was the clever Gemini Wizard who perceived that the Virgo had possessed a heart all the time, without realizing it, hidden inside a suit of cold metal, yet larger than any of the others. That’s magic!