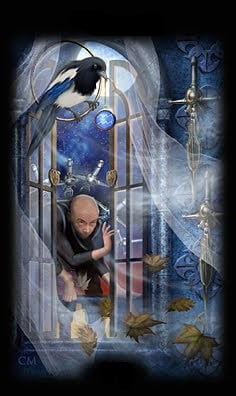 The Libra-decanate of Aquarius is pictured by CETUS, which mythology informs us is the largest constellation in the sky. This Whale was the monster that devoured the innocent youths of the country as a punishment for the haughty pride of their queen.

In this manner is symbolized the tendency of those born under this influence to enter into matrimony from other motives than those of pure love; or, from some material motive renouncing love altogether, to be consumed by its energy inversely directed. These people reach their greatest efficiency and attainment only in harmonious association with a kindred soul of opposite sex. When they deny true love, or make it subservient to material ambitions they are in great danger. But when they follow the dictates of the heart and realize companionship in the higher sense they become efficient workers for human betterment. A solitary life is not beneficial to these people. They should mix with others and take a keen interest in helping to make the world a better place in which to live. This is the work for which they are fitted.

C. W. leadbeater, the Theosophical writer, was born when the Sun was in this decanate. John Cooper, who did a work of great value toward human enlightenment in translating the “Primum Mobile” of Placidus was born with the Moon here. And Have-lock Ellis, author of “Sexual Inversion” and other works dealing with sex, was born with this part of the zodiac on the Ascendant. It is the decanate of REPRESSION.

A black and angry man; and the signification of this is in expressing insolence; and impudence. 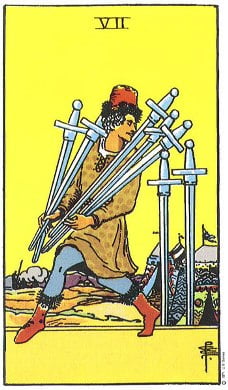 Partial success. Yielding when victory is within grasp, as if the last reserves of strength were used up. Inclination to lose when on the point of gaining, through not continuing the effort. Love of abundance, fascinated by display, given to compliments, affronts and insolences, and to spy upon others. Inclined to betray confidences, not always intentionally. Rather vacillatory and unreliable. … (Journey by land: in character untrustworthy).
Number: 7
Card Title: Seven of Swords
Esoteric Title: Lord of Unstable Effort
Numerical Keywords: 7: Passion, Karma, Instinct
Numerical Attributions: Venus, Green, World, Above
Intelligence: Concealed or Occult Intelligence
Element: Air (hot, wet)
Elemental Keywords: Mind, Ideas, Cutting
Elemental Attributions: East, Spring, Sunrise
Astrological Attribution: Moon in Aquarius
Dates & Timing: February 9 to February 18
Qabalistic World: Netzach of Yetzirah
Translation of World: The Victory of Formation
Suit Color: Swords- Yellow

Interpretation: Change is in the air. Yielding when victory is within grasp. The law of cause and effect. Disguise. The Trickster. Coyote.

Reversed Interpretation: Return of Stolen Property. Return of unfaithful or unworthy lover who wishes to make restitution. Thief returns what was stolen. An apology is forthcoming.

Alan Leo: This will cause the native to’ form some attachment, to have the life of another linked with his own for some years to come. He will find a more balanced and equalised state of mind coming to him under this new influence, will become very refined mentally, and will have social:experiences that will be more to his liking than formerly. To the very advanced this brings the opportunity to open up the higher sense of clairvoyance, or clear vision, and brings that state of C balance’ which is aimed at by all who desire to make true progress. It will develop a very keen sense of justice, so that the native will act conscientiously and honourably in all dealings with others. It will give him also the faculty of comparison, and the power to see both sides of a question equally. This progressed ascendant will help the native to take full advantage of all the good aspects operating during the period in which it is in force.