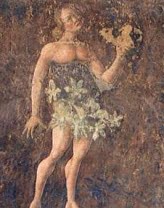 The first decanate of Cancer is depicted in the sky by a little yapping cur— CANIS MINOR—a mongrel without courage or loyalty. By it the ancient masters sought to convey the thought that those born under this section of the sky are particularly susceptible to domestic intrigue. They have strong emotions and may easily be carried away by them. Consequently, they should put forth a persistent effort to cultivate the qualities of faithfulness and poise.

Through the activity of the emotional nature, and their sensitiveness to all that affects life, they are often capable of remarkable poetic and dramatic expression. Unknown to themselves they are the mediums through which entities on the inner planes manifest. And because they are such perfect mediums they sometimes betray the trust placed in them, for they tend to yield to the temporarily strongest influence. They should learn to be positive and firm.

Louis XII of France, who divorced his virtuous and ill-favored queen, Joan, to marry Anne of Brittany, by whom he was dominated, was born with the Sun in this decanate. Nell Gwyn, actress and favorite of Charles II, had her Moon in this place. And Lord Byron, the poet, whose love affairs were none too conventional, was born with this decanate on the Ascendant. It is the decanate of MOODS.

A young Virgin, adorned with fine cloathes [clothes], and having a Crown on her head; it giveth acuteness of senses, subtilty of wit, and the love of men. 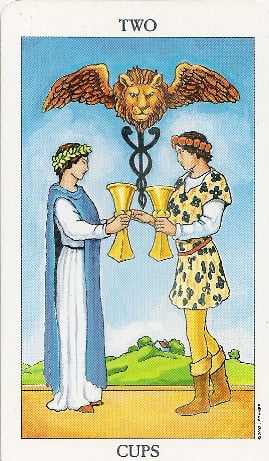 Interpretation: Relationship between friends and lovers not groups of people. Meeting with like minded person. Spiritual nourishment. Good news coming to home, bringing love or new home. Exchange of loving energy. Beginning phase of relationship. The harmony of male and female that radiates an intensity of joy and ecstasy.

Reversed Interpretation: One party is less interested. Disparity in way 2 parties judge a relationships value and areas of compatibility. One person looking at differences, the other looking at similarities. Quarrels resolved by using intellect rather than emotions. Misunderstanding with someone important. Love turning to opposite. Discord in friendship, one of the parties breaking off.

Alan Leo: This new sign ascending will bring into the life a keener interest in all domestic and home affairs. It will open up a softer side of the nature so that it will become receptive and sensitive, more keenly alive in fact to feelings and sensations, and the general psychic (or internal) conditions of the environment and surroundings. The native will find himself feeling vibrations that he was not conscious of before, and a new world will open up within him-of which he mayor may not be physically conscious, according to the progress he has made in evolution. To those who can fully respond to this progressed ascendant a psychic centre will awaken, and a greater interest will be taken in all occult and mystical things. But with the ordinary individual, carried blindly along by the tide of evolution, the sensational side of the nature merely will be touched, and the feelings will thus have opportunities to expand; either through personal attachments, or through ties and engagements of one kind or another which will draw out the personal feeling and so evolve sensitiveness. To all it will bring a firmer grip on life, and give that persistence and tenacity which bring keener experiences to the personality.