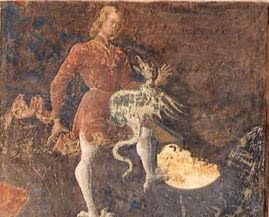 ARGO, the constellated ship that gave foundation for the story both of Noah’s Ark and that of the adventurous Argonautic expedition, pictures the third decanate of Cancer. There will be stormy seas in the lives of those born here, but a tranquil mind will prove an adequate bark to carry them to the shores of safety.

They are restless and somewhat discontented. While loving domestic life, yet they are also eager to learn what is just below the horizon. Their curiosity, however, becomes an asset and leads them into fields that are all too little known. They are great lovers of Mother Nature, take keen delight in spying out her secrets, and in this kind of work find their greatest natural aptitude.

The celebrated Finnish painter, Albert Edelfelt, had the Sun in this decanate at his birth. Lorenzo Niles Fowler, whose investigations in another department of Nature’s laboratory, that of phrenology, has made him noted, had his Moon here at birth. And Bulwer Lytton, who delved deeply into the occult— for among his many novels we find two depicting respectively the lives of a white and a black magician, “Zanoni” and “A Strange Story”—was born with his Ascendant in this part of the heavens. It is the decanate of RESEARCH.

A man a Hunter with his lance and horne, bringing out dogs for to hunt; the signification of this is the contention of men, the pursuing of those who fly, the hunting and possessing of things by arms and brawlings. 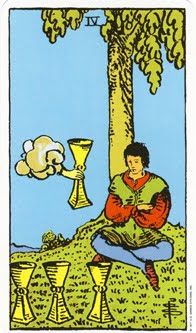 Success or pleasure approaching their end. A stationary period in happiness, which may, or may not, continue. It does not mean love and marriage so much as the previous symbol. It is too passive a symbol to represent perfectly complete happiness. Swiftness, hunting and pursuing. Acquisition by contention: injustice sometimes; some drawbacks to pleasure implied.

Reversed Interpretation: New things are offered. Sees and is ready to grasp new ideas and opportunities.

Alan Leo: This will bring an opportunity to ultimately close the account of the sign Cancer. The effect of this influence upon the life may be unmanifested in its external physical expression, for it is more likely to be felt internally and psychically than outwardly. The native will become very receptive and far more negative than usual under its influence, so that he will receive vibrations from without to such an extent as to make him painfully sensitive to his environment and general surroundings. He will thus be able to feel the conditions of others and to sense them in a peculiar way, so that he will find himself more than usually hospitable, kind and sympathetic. It will bring some connection with hospitals or institutions into the life, probably for the first time, perhaps some temporary confinement, either through ill-health or other unavoidable causes. To the very progressive this gives the opportunity to taste of that universal love which is free from personal taint; but only to the very advanced comes this touch of the “universal solvent.” To the ordinary slowly progressing individual it awakens a fuller sympathy, and brings the feelings to a stage wherein that deeper emotion is experienced which is rather silent than inclined to seek expression.