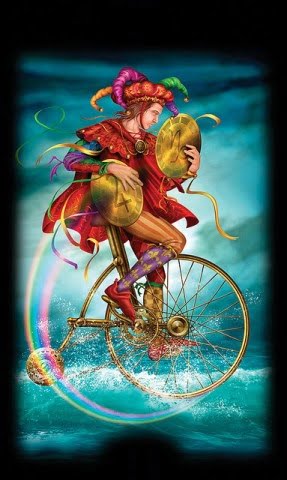 CYGNUS – the Swan – speckless white, which with outspread pinions wings its way from the frozen north toward the sunny southern skies, pictures among the constellations the first decanate of Capricorn. It symbolizes the first news of a new order of things, a retreat from the crystallizing influence of materialism, and the harbinger of the approaching warmth of a spiritual spring.

So we find those born under this influence, when living at their best, to be forerunners of better conditions. They, better than any others, realize the value of system and organization to effect any worthwhile changes. And in business or in politics, both of which are spheres of activity to which they naturally gravitate, their greatest asset is in conciliating different factions and inducing them to join in some large merger which will operate more economically and efficiently than could any one faction alone. These people shoulder responsibility readily and become the managers in the world. To live at their highest they must be permitted to find expression for their talent of co-ordination.

Woodrow Wilson, one-time president of the U.S., whose greatest effort was made toward effecting a “League of Nations,” was born with his Individuality here. Bessie Leo, owner of “Modern Astrology” and publisher of many books on astrology, was born with her Mentality in this decanate. And Cicero, the great orator and stateman, had this section of the zodiac rising at his birth. It is the decanate of ORGANIZATION.

A woman, and a man carrying full bags; and the signification of these is for to go forth and to rejoyce, to gain and to lose with weakness and baseness.

The harmony of change, alternation of gain and loss; weakness and strength; everchanging occupation; wandering, discontented with any fixed condition of things; now elated, then melancholy; industrious, yet unreliable; fortunate through prudence of management, yet sometimes unaccountably foolish; alternatively talkative and suspicious. Kind, yet wavering and inconsistent. Fortunate in journeying. Argumentative. … (Pleasant change, visit to friends). 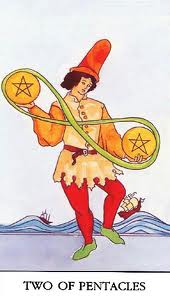 Interpretation: Endless cycles of change. The earth as a stage. The nature of earthly things to change. Everything will eventually become its opposite. Promoting 2 or more business ventures. Likes 2 jobs for the variety. Have several money making options. News of a journey or change or residence. Use of talent to succeed. User of economy in displaying ones forces. Income of an artist/performer.

Reversed Interpretation: Discontent with any fixed condition. Wavering and Inconsistent. Narrowing several projects into one. Weighing alternatives and choosing. Person m ay decide to work on his own. Business decision has been reached with commitment to act. Emotional instability causes delay or difficulty starting project. Need to control Fluxuation of moods. Choice of direction is crucial for cusses. Too many irons in the fire. Plans go awry.

Alan Leo: This will bring a more ambitious and withal diplomatic attitude of mind, and if progressive enough to respond to this new vibration the native will gain advancement in life and rise to a higher position than that held at birth. He will become much more industrious and persevering and with endurance and tact may now make great headway; though it too often happens that those under this progressed ascendant have not the inherent ability to take full advantage of its influence. To the very progressive it is a grand opportunity to gain recognition and to obtain a footing which will make the whole of the future; for it means eventually independence and position to those who have the ability to rise through their own merit. To the advanced, it brings a love of service to others; to the ordinary individual, industry, thrift, economy, prudence and chastity. It will benefit the native according to the directions operating, but it is an influence that only the progressive can truly appreciate.