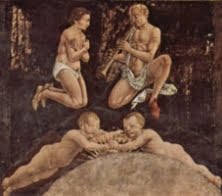 The second decanate of Gemini is pictured in the sky by a large dog— CANIS MAJOR. This noble looking beast is the emblem of faithfulness, and through its adoration for its master also represents the worshiping and serving of Deity—for to the dog his master is God. Therefore, we find those born under the second decanate of Gemini often possess a singular and admirable faithfulness, either to their human companions or to some high ideal. They have much veneration and seek to obey the voice of their conscience implicitly.

This Venus decanate also relates to twin-souls. So there is greater likelihood of those born here finding a congenial mate than is the case with most. And to make the best of life they must espouse some principle or progressive cause, and work to get it generally acknowledged and accepted.

Robert Schumann, the musical critic and composer, who was so faithful to his ideal of musical interpretation, was born with his Individuality polarized in this decanate. Miss Florence Cook, whose faithfulness to the cause of spiritualism led her to become the medium through whom “Katie King” manifested to Sir. Win. Crookes, had her Mentality pictured by this section of the sky. And Win. Jennings Bryan, whose faithfulness to his political and religious convictions is the best known feature of his career, was born with his Personality in this part of Gemini. It is the decanate of FIDELITY.

A man in whose hand is a Pipe, and another being bowed down, digging the earth: and they signifie infamous and dishonest agility, as that of Jesters and Juglers [jugglers]; it also signifies labours and painful searchings.

9 of Swords – Despair and Cruelty: Interpretation: Problems worsening. Fear that the situation will deteriorate and never change for the better. Intense fear and anxiety. Worrying about other peoples problems or things that you can’t change.

Reversed Interpretation: Sunshine after a storm. Release of tension and worry after a long ordeal. Light at the end of the tunnel. Things beginning to get better. Snapping out of depression & anxiety. Hope for tomorrow. “Tomorrow is a new day” (Anne of Green Gables)

Alan Leo: This will introduce a more peaceful and evenly balanced period, and probably bring more pleasure and quiet than formerly. Someone will come into the native’s sphere who will influence him for life, and the two careers will now run on similar lines; so that, each working in the same groove with the other, much of the responsibility of lifp. will be shared, and the native’s pathway will thus be smoothed to a considerable extent. This union with another life is a marked feature of the decanate; for there has now been reached a stage in evolution when the active bustle and turmoil of life is to be put on one side for a time. To those who are making great progress this brings an opportunity to develop or to cultivate the higher sense of clairvoyance. or clear vision; to those, however, who are not ready to advance into the more subjective planes it will bring clearer perception, and awaken a deeper appreciation of comparisons, allowing them to see both sides of every question in a far clearer light than hitherto. Even should no external progress appear to be made, the advent of this decanate upon the ascendant will bring an ‘nlmfal progress that will manifest later.