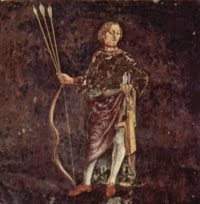 A huge bear – URSA MAJOR – traveling about the pole-star in a forward direction depicts among the constellations the Aquarius-decanate of Gemini. The bear, whose restless activity and omnivorous nature is typical of mentality, in this case moves as does the objective mind, in the direction of events. And it is huge in size to indicate the immense power that may be exercised by thought. This is the scientific decanate of the sign of thought. Those born under it are capable of accomplishing great things through the exercise of their minds. They tend chiefly to rely upon reason, therefore, should not only train their minds, which is readily accomplished, but should also cultivate idealism and religion. Otherwise their efforts crystallize and become self-centered.

Nero, the Roman Emperor, who had wonderful talent, but could burn Rome for his own amusement so self-centered had he become, had the Sun in this section of the heavens at his birth. On the other hand, as indicating the better qualities of this decanate, Nicholas Culpepper, author of the “Herbal” and by his friends said to be the best physician that ever lived, had his Moon here. And Jay Gould, whose manipulation of railroad securities wrecked so many others and made for himself such a huge fortune, had his Personality located in this last decanate of Gemini. It is the decanate of REASON.

A man seeking for Arms, and a fool holding in the right hand a Bird, and in his left a pipe, and they are the significations of forgetfulness, wrath, boldness, jeasts [jests], scurrilities, and unprofitable words. 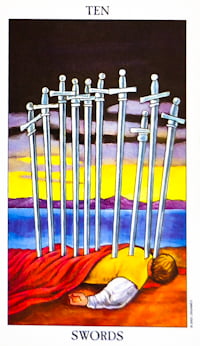 Undisciplined, warring force, complete disruption and failure. Ruin of all plans and projects. Disdain, insolence and impertinence, yet mirth and jollity therewith. A marplot, loving to overthrow the happiness of others; a repeater of things; given to much unprofitable speech, and of many words. Yet clever, eloquent, etc., according to dignity.

Interpretation: Situation has failed miserably. Need to completely start over. Better than 9 of swords because period of wait and anxiety is over. Decision to give up on a losing cause is close at hand. Changing action can lessen impact. Reason divorced from reality. Energy of swords is a disruptive force. End of Illusion. Utterly crushed and defeated by is situation. Totally start over.

Reversed Interpretation: Courage to Rise again. Have survived the worst. And now need to get back on your feet. The disaster is over and won’t be repeated again. Gifts of strength and survival instinct from living though a disaster. Over throw of evil forces. Better health. Turn to higher powers for spiritual help. Dissolution of illusion.

Alan Leo: This will bring a new cycle into active expression. for to the intellectual perception acquired under the sign Gemini a more fixed and concentrative mentality will be added, giving the native more power to concentrate his thoughts than formerly and to apply his mind to deeper studies. He will now make some new friends, and their friendship will be very helpful and beneficial. He will also be brought into touch with groups of persons and with associations, either of a scientific or occult order. This progressed ascendant offers some splendid opportunities for the growth of a more stable mind, and develops a peculiar ability to judge human nature from an impersonal and unprejudiced standpoint; but only those who are really progressive can abstract all its virtues, for it gives a keener interest in the highest of all opportunities-the opportunity to enter into the purely human side of the nature and to abstract the mind from that side of the nature wherein the lower or personal mind has a stronger voice than the higher or subjective. To the ordinary person. however, it merely brings new acquaintances and increased social intercourse with others.