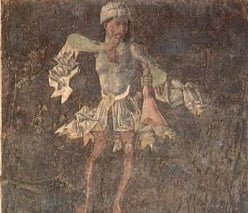 CORVUS, the Raven, is the constellation picturing the tendencies of people born under the third decanate of Leo. This raven is pictured with wings outspread as if in readiness to fly aloft, but with its feet firmly gripping the back of Hydra, the water-serpent. This symbolizes the emotions that are associated with creative energy, for the raven appears to be making a meal from the flesh of the serpent.

In this last portion of Leo we have the love of power and rulership combined with the quality of leadership bestowed by Aries. As a consequence those born under this section of the sky are determined to rise in life regardless of obstacles. And when this tendency is carried to extremes they will sacrifice their associates, their family, and even integrity itself, in order to increase their power. But when their ideals are thoroughly for the welfai’e of humanity rather than for mere personal aggrandizement, they become of immense service to society through their natural gift of being able to handle others and use them to advantage.

Napoleon I, who attempted to conquer the world by arms, was born with the Sun in this decanate. Dr. Zamenhof, who invented a language, Esperanto, which was to supersede all other languages in the world, had his Moon in this section of the heavens. And Alan Leo, who attempted to give to astrology a world-wide recognition and power, was born with his Ascendant here. It is the decanate of AMBITION.

A young man in whose hand is a Whip, and a man very sad, and of an ill aspect; they signifie love and society, and the loss of ones right for avoiding strife. 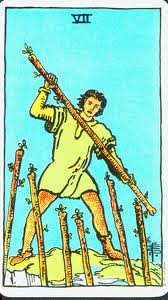 Possible victory, depending on the energy and courage exercised; valour; opposition, obstacles and difficulties, yet courage to meet them; quarrelling, ignorance, pretence, and wrangling, and threatening; also victory in small and unimportant things: and influence upon subordinates.

Interpretation:Taking a stand. Becoming a leader. There are difficulties but you have the courage to meet them.

Reversed Interpretation: May be displaying strength but feeling inadequate. Caution against indecision. Don’t be taken advantage of. Fighting just to fight.

Alan Leo: This will temper the outgoing energies of Leo and bring more reason and mind development to balance the feeling and emotional side of the sign. There is, however, some danger of going to extremes while under the rule of this progressed ascendant, for it gives a liability to impulse and to some rash and hasty actions. The native will be more assertive and positive than usual and inclined to become enterprising and very energetic. It will accentuate the activities and cause him to view life from a more progressive and ambitious standpoint. To those who are very progressive it will bring much more of the pioneer spirit and a great desire to lead, and will, if opportunity affords, increase patriotism and enthusiasm: with the ordinary person it will develop more intellect, so that there will be an effort to blend heart with head. But very few can realise the highest standard of this progressed ascendant, which is-Truth, and the courage of conviction, enabling one to carry out principles through all obstacles and difficulties. The native will have plenty of force and a great deal of courage, and should under favourable directions profit in many ways through the influence of this decanate; more especially by his own power and assertiveness, which in its highest aspect should be Will and Self-control.