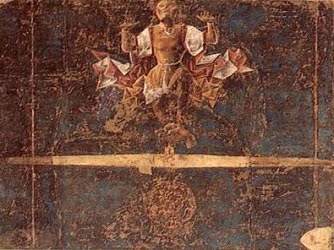 Libra Decan 2 is ruled by Saturn in both systems (Aquarius triplicity). The Sun charms its way through the constellations of the Crow, Flying fish, Herdsman and the Dragon from October 4 to 13. Here we find ourselves in one of the most notorious zones in fixed star astrology. This is the home of Algorab in the crow, but it’s all wrapped up in finest Venusian silk! This is where victims of the crafty crow come unstuck. You can see your opponents from the more obviously aggressive decans coming. But you just don’t expect such a low down and dirty attack from your divinely adorable Libra decan 2.

The Aquarius decanate of Libra differs somewhat from the other decanates of this sign in the strong tendency to express individuality. Being under the sub-influence of Uranus, it partakes of the Uranian quality of originality and sometimes even eccentricity. It is pictured among the constellations by DRACO — the Dragon — which winds its length in sinuous coils about the heavenly pole.

And even as this is the dragon of worldliness that St. George was called upon to conquer, so, very frequently, those born under this decanate find in the world some opposition to their views which they feel it incumbent upon themselves to slay. They are natural exponents of liberty in thought and action, and rebel against restrictions. They find the best opportunity to express themselves as enthusiastic members or leaders of progressive movements. And in fighting the tendency toward crystallized conservatism, they reach their highest level.

S.J. Paul Kruger, Boer President, who struggled valiantly for the liberty of his people had his Individuality in this decanate. Magi Zariel, largely responsible for founding the National Astrological Society, and for 25 years editor of its official organ, “Prophecy,” was born with his Mentality polarized in this place. And W. H. Chaney, author of “Primer of Astrology,” who fought energetically in defense of astro-science, was born with this part of the heavens on the Ascendant. It is the decanate of INDEPENDENCE.

Agrippa’s Description of the Libra Decan 2:

Two men furious and wrathful and a man in a comely garment, sitting in a chair; and the signification of these is to shew indignation against the evil, and quietness and security of life with plenty of good things.

Ill-Dignified: healing, deep sympathy, disorder, confusion, loss but not as extreme as upright.

Reversed Interpretation: Recovery from emotionally painful relationship or triangle. May be involved in a very difficult relationship and doesn’t realize ending won’t be as painful as he things. May recover quickly. Deep sympathy for those in pain.

Alan Leo: This is a very favourable ascendant, especially for those who can rise to that point where response may be made to the highest vibration that it produces. It will give the native a much firmer and more stable frame of mind and cause him to become social, independent, and free; for it awakens and liberates a more social and artistic condition, hitherto more or less latent. He will now make some lasting and faithful friendships, and also form attachments that will be very helpful and beneficial to him. His mentality will become more refined, and inclined towards the more metaphysical and subjective types of study; and if he can abstract the inner virtue of this decanate he will find it leading him to the study of higher thought and occult or mystical subjects. To the very progressive it brings associations with groups of persons, societies and public gatherings, and awakens the truly humanitarian side of the nature. The native will be able to study and comprehend character and human nature with ease if he develops the best side of this influence. He will be pure-minded, have potent desires, and make much progress in purity of thought and refinement 01 expression during the time that this decanate occupies the progressed ascendant.