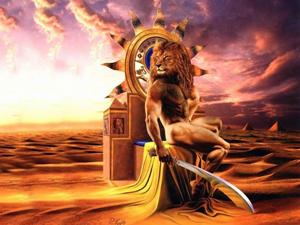 One of the myths which helps to shed some sunlight on the sun-ruled sign of Leo is the medieval legend of Parzival. Although we may recognize this figure as Sir Percival from the Grail stories, Parzival, is in fact a much older figure, whose roots lie in pre-Christian Celtic and Germanic mythology. And probably, if we were to assign Parzival a sun-sign, he would be a Leo.

Parzival is the epitome of the hero on the quest. As we have seen, the figure of the hero is close to Leo’s heart, since the sign is really concerned with the expression of unique individual potential.

Our mythical hero, like many other heroes, is fatherless at the beginning of the story, and grows up in a wood with his mother. He is ignorant of his origins, since his mother has been at pains to prevent him from discovering them. She is afraid he will leave her and go off into the world. So Parzival is naïve and innocent in his comfortable next in the forest.

One day a troop of knights drive through the wood, and Parzival sees them and talks with them. He decides to become a knight. His mother, naturally, has hysterics, since this means he will abandon her. She tries to thwart him. But he is determined to seek his future, to find out what he might become. The nobility and chivalry of the knights have fired his vision and imagination. So he makes himself a very inadequate suit of armour out of sticks and leaves, and rides off.

Strangely, Leo is often fatherless, or has a difficult relationship with the father. It seems as though the deeper significance that underlies the sign requires a kind of search for a true Father, an inner self or spiritual core. And the call to leave what is known and comfortable for the sake of a dangerous but shining future is also characteristic of Leo. Often he must rebel against authority or social mores to begin his quest. No matter where you find him, Leo always has his eye on becoming bigger, better, greater. There is always something beckoning him, more attractive than the place he’s in.

So Parzival begins his adventures. After many vicissitudes, Parzival has a vision in a forest when he finds himself in a mysterious glittering castle, surrounded by incense and gold and strange figures. There is a sick old king with a wound in his groin, who performs an elaborate ritual where the poisoned blood is drawn out through the point of a lance. There is an enigmatic and beautiful woman who enters bearing a platter on which rests a sword and an object which comes to be known in later Christianized legends as the Holy Grail – the cup from which Christ drank in the Last Supper. In the original story, the Grail – of Sangraal – is not a cup at all, but a stone – the Philosopher’s stone of alchemy, the symbol of the eternal Self. Parzival stares, bewildered at this drama, but does not say anything. His mother has taught him never to ask rude questions of strangers, and this people are even stranger than strangers. So he remains silent throughout the ceremony. Finally, a great angry voice speaks and tells him he has made a dreadful mistake and failed everybody because the whole point is that he asks the magic question which will restore the sick old king to health and win Parzival the Grail Maiden as wife and the Grail Castle as inheritance. And the question is: What does this mean?

Parzival awakens from his vision cold and alone in the wood. He realizes that he has been blind and ignorant, and resolves to find the Grail Castle again one day. The second part of the legend concerns the process of his slow maturing. Eventually, a man and a true hero, he rediscovers the castle after much pain and suffering and the passage of twenty years. This time he remembers to ask the question. And he discovers that he is really the son of the Grail King, and becomes the new King and custodian of the Stone of Life.

If we remove the later embellishments which Christianity has placed over the tale, we can see in it the pattern of Leo’s life. For the quest of Leo is the quest of the Self: Who am I? What does my life mean? What is it that makes me different from others? It is a deeply introverted and profound quest. Many Leos are not aware in any way that this is their road; but they follow it nonetheless. The showy Leo of traditional readings is usually either a very young Leo who hasn’t awakened yet, or an older Leo who has lost the Grail Castle and hasn’t the courage to try again. So he seeks his identity in the audience. But Leo is not really the showman of the zodiac. That role must go to Sagittarius, whose profligate ruler Jupiter, is a much better representative of amateur dramatics. Leo’s path lies within himself, although the fruits of his creative searching are often products which the world sees and acclaims. But the creative process doesn’t really have anything to do with the audience. It is between Leo and himself, the think within him that creates. It is this discovery that an Other, a Something inside is capable of offering creative ideas and images through the medium of one’s own mind and hands that is Leo’s most important discovery. That’s the road to the Grail Castle. The Leo who is courageous enough to pursue this road will come eventually to his own centre. The psychology of Carl Jung is an excellent expression of this quest for the Self. Jung called the process of individualism the process whereby a man becomes himself. It is a lifetime’s journey. The central motif of the Self, the inner essence of the personality, is paramount to Jungian philosophy. It isn’t coincidental that Jung was a Leo.

For this reason too, Leo is self-centred. He has a kind of constant self-consciousness, a sort of watcher that is always watching himself watching himself, that never really allows him to be totally aware of the environment except in relation to himself. It is almost impossible for Leo to detach from himself. Nor should he. His whole journey is about discovering who that watcher is. As the Alan Watt’s limerick goes:

Leo’s tendency towards self-centeredness can be irritating to other signs. But it needs to be seen for what it is: a powerful drive towards self-recognition. Leo also needs to understand it, because otherwise he can make the mistake of assuming that it’s the little ‘me’ that’s the object of all that energy. Then he really becomes insufferable. He can inflate, and think he’s the most wonderful thing in the world. God’s chosen son to whom all the world owes obeisance. But if Leo ever understands that the Other is not him, but his source, then he has truly come to the vision of the Grail, and becomes a light which illumines the lives of others not by what he does, but by what he is – the true hero who has found his journey’s goal.