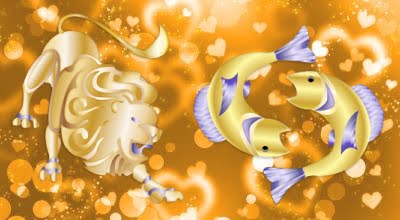 … it need not be said who was the captain.

Before we go any further, it may as well be understood in the beginning that there’s no hope of the male or female Fish ever truly conquering the Lion or Lioness. It simply cannot be done. It’s against all precepts of astrology and nature. So why do we see so many Pisceans hanging around with Leos? Because being conquered isn’t really all that unpleasant to a Piscean when the Big Cat is the winner, that’s why.

Leos are normally generous to the defeated, benevolent monarchs who lack cruel or malicious intent (although often making up for it in arrogance), and Fish secretly prefer to be dominated, as long as it’s done with affection, which it nearly always is with Leo. Being dominated, you see, makes life easier. Someone else tells you what to do, leaving lots of time for Neptune daydreams, less for obligatory decisions of responsibility. The typical Piscean is all for an association that leaves plenty of room for swimming around freely, while the next trip upstream or downstream is charted by someone who enjoys such matters. Pisces does not. The activities of dominating and conquering are tiresome occupations at best, requiring much energy and more ego than the average Fish possesses.

There may be an occasional Piscean who dreams, at odd moments, of conquering the Lion or Lioness, and it might be that a Fish who had the planetary position at birth of Mars- in-Aries prefers to lead, rather than to follow. It’s perfectly true that Mars exerts a formidable influence through its own natural sign of Aries, making such a Piscean less humble and accommodating. But Mars, for all its strength, courage, and daring, will never truly defeat or dominate radiant Apollo, the Sun God. Study your Greek mythology. No planet, not even awesome Pluto or stem Saturn, has the sheer life-giving force of the Sun, and if this brilliant Luminary exercised its power through the Pisces zone of the zodiac at birth, he or she is a Pisces, and that’s that – never mind any periodic spurts of Martian bravado. Essentially and basically, when all the chips and scales are counted, a Fish is a Fish.

The location of the Sun at the moment of the first breath is the key to the true essence of the person, for the simple reason that the Sun is the most powerful influence in the heavens, therefore in the horoscope. In addition, the Sun also happens to be the ruler of Leo. So we’re back – full circle – to the dominance issue between these two. No matter how you size up the scene, the Lion will rule the Fish. The Piscean with other more positive vibrations in the nativity (such as Mars-in-Aries, or Moon-in-Aries) may give the Lions and Lionesses a bit more of a challenge, but what chance does such a planetary boost at birth have against the royal Leo Kings and Queens when even the Aries Sun Sign native (like myself) must eventually submit to Leonine superiority to keep the peace?

Appreciation and admiration never fail to enhance the Sunny nature of Leo, and no one appreciates or admires more charmingly than Pisces. Conversely, Leo’s warm Solar rays never fail to bring into flower the delicate blossoms of the Neptune personality of Pisces which need to be tenderly cared for, and no one can be more warmly protective and affectionate than Leo. Therefore, unless there are serious conflicts between their mutual Moon Signs, Ascendents or Sun-Moon aspects, together they can encourage the best in each other, complement one another’s essence, and find considerable joy and comfort in an alliance.

This is not an infrequent combination, since Pisces can bring much tenderness and insight into Leo’s life – while Leo can bring a great measure of emotional and other security into the Piscean’s life. Still a Lion may swallow a Fish when the Big Cat grows tired of playing. These two are not compatible by nature, and must work at harmony. Leo feels at home in a hot, dry, jungle habitat – Pisces, in cool, shaded waters. There are considerable basic differences, and one of them must give up familiarity of environment, symbolically, to remain together. If the Leo has a Water Sign Ascendent or the Moon in a Water Sign, it will be easier to renounce the jungle life for a dive into deep Neptune waters. If the Fish has a Fire Sign Ascendent or the Moon in a Fire Sign, it will be easier to breathe free on dry land, roaming the “pride” beside the noble Lion or Lioness, without longing for escape back into the ocean of emotional oblivion.

The 6-8 Sun Sign Pattern of Leo-Pisces has the potential of becoming a satisfactory relationship, with all the appeal outward strength has for inward strength … and vice versa. Since the Fish has an inner spiritual noblesse oblige comparable to the dignified outer nobility of Leo’s personality, they can, if they try, manage very well on any stage of life, whether it be business, friendship, family, or marital.

Leo is the zodiacal sixth house of service to Pisces, which explains the unusual urge in Leo to willingly serve Pisces in some way, not a normal behavioral pattern with Big Cats toward other Sun Signs. Of course, that doesn’t negate the superiority syndrome, just dilutes it somewhat. After all, monarchs do serve their subjects graciously and continually, but they’re still monarchs.

Most Pisceans have a tough time deciding what exactly it is they want to do or be. They listen willingly to almost everyone’s advice, follow it only for a short while – or do nothing. Right there is where trouble may start. Leo must be obeyed or be miserable. Since Pisces can’t bear to see anyone miserable, and Leo cannot bear to see anyone wandering around without a goal, the impasse could end up with a sulking Lion and a weeping Fish.

Often Pisces is tempted by two possibilities at once, which equally lure and intrigue. The Lion should permit the Fish a fling at both simultaneously if necessary, because Pisces needs time and lack of pressure to try things out through multiple experience – as a way of finding himself (or herself). It’s a wise Lion (or Lioness) who grants to Pisces this privilege, and Leo is, after all, possessed of innate dignity and wisdom. (I thought I’d make a few points here for the Fish since they’re not big on making points for themselves.)

A Fish, in any sort of daily contact with a Lion, should always keep in mind that sincere appreciation (flattery) will soothe the savage beast more quickly than pouting, tears, or silence. The Lion should not forget that gentleness is the most reliable bait with which to lure the sensitive Piscean, and regal roaring only causes the Fish to frantically flap its fins and struggle to breathe. It isn’t difficult for these two to adjust to one another and find happiness if they both show their positive instead of negative sides.

Leo will demand (or at least expect) control over money, being a natural organizer. But Leo is also extravagant. Pisces is often surprisingly good at handling the intricacies of finance, but the Fish doesn’t really have any basic respect for money. So it might be better if they took turns handling the income and the outgo. The Neptunian attitude toward most everything is intuitive rather than rational. This will invariably frustrate the Sun-ruled Leo, to whom rationality is the only sensible foundation for all opinion and action. It’s a rough spot. And there are others. The accomplishment of smooth routine comes naturally to Leo, the sign of the Fixed Organizer. To Pisces, however, the order and discipline necessary for successful organization does not come naturally.

A Fish can infuriate a Lion by finding correct answers in a situation which appears to be a total mess to Leo. The same rule may be applied to messy checkbook stubs, messy desks, and messy houses. Perhaps we should use the word “confused” instead of messy. Leo likes a place for everything, and every-thing in its place. Pisces believes that a lifetime spent neatly organizing every item and every hour into a rigid system is a lifetime wasted. The Fish always feels more relaxed when the surroundings are comfortably chaotic and somewhat disordered, not too neat, thank you.

It’s seldom that a Piscean will fight confrontation with real aggression.

Neptune men and women drown in hidden insecurity. Those types mentioned earlier with some positive vibration in the horoscope, like Mars or the Moon in Aries, may ride the waves of outrageous fortune or unjust treatment for a while. But even these will eventually swim away to calmer bays and inlets. Escape will inevitably be the end solution, the final action. Fish are hard to pin down. Neptune, among other things, rules gas, impossible to confine when it seeks release.

Astrology whispers of Piscean Fish who become devouring Whales. This is true. There are some unaccountable Neptune mutations. But even the rare Whale-type Fish who devours an occasional Crab or Virgin will find it impossible to pull the Jonah act with Leo. Either the Lion emerges triumphant – or the Fish swims away. Although the general impression of Pisces is elusive, the Big Cats are adept at stalking creatures who think they’re safely out of reach … until an unexpected Leonine paw suddenly pins them to the ground. The end of any serious clash between Leo and Pisces is predictable.

Lions who wish to live harmoniously and peacefully with Fish must help them find a way to blend the Neptune duality, tenderly console them, apply soothing balm to their emotional insecurities, and lead them gently out of the foggy mists where they daydream into the sunlight of truth and reality. You see how wise the stars are? As I said in the beginning, the Lion will be the leader in the relationship, and that’s the way it works out best for both sides. Pisces needs a strong paw to grip, a hand to hold, while walking through the deep woods of life, lest some unseen danger lurking in the underbrush should leap out to lunge without warning. And who is stronger in the face of danger than the Lion? Leo protects. Pisces admires … with touching gratitude. And isn’t it a lovely day? If it doesn’t rain. If it does rain, the spiritually mature Fish can teach Leo how to avoid getting drenched in life’s unexpected cloudbursts. After all, one good tum deserves another.