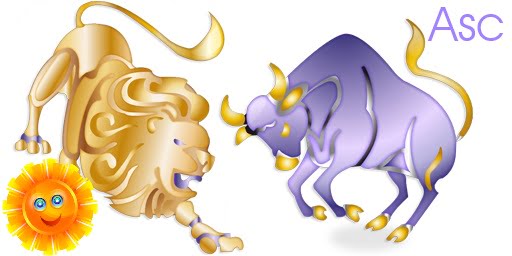 Here come some intense people who need to lighten up and not deal with life as though everything is black or white. They’re too much “my way or the highway” and have too little willingness to compromise—and both Leo and Taurus are fixed signs, so they feel their disappointments too deeply. Leo’s pride and Taurus’ determination make for a particularly dependable, focused person, but these folks are entirely too serious about everything. They’re dignified but sometimes aloof. And they’re resistant to change, wanting to hold onto the status quo. They need to move along to avoid becoming unapproachable sad sacks. Leos with Taurus rising are confident and competent enough to do just about anything they set their mind to, but they’re at their best and most satisfied in practical pursuits—unless they find a way to exploit their potentially beautiful, articulate, baritone voice. They’re proficient in vocations that revolve around banking or real estate, but will probably be most happy when they’re self-employed. They might flourish when they’re running a small business and calling their own shots, but their challenge is to avoid being too demanding of their employees, chasing them away with a bullish intolerance. [..]

Leos born around midnight aren’t easily impressed with anything. They demand excellence both as professionals and as consumers. They insist on a quality effort from employees and colleagues as well as from themselves. They can actually be quite hard on themselves, even when they’re doing a better job than everyone else. But if these Leos can temper their intense seriousness and use their generosity as a basis for growing their people skills, they’ll become the most valued members of the team. On the other hand, if their demanding ways become little more than blatant intolerance, they’ll find themselves considered too difficult to work with. Taurus, the Banker, likes to keep things simple, but while “keep it simple” is practical and useful, it’s not all that celebrative. So these Leos need to remember to go with the flow, to enjoy the party and have a good time. If they’ll lighten up and move along, they just might end up enjoying themselves!