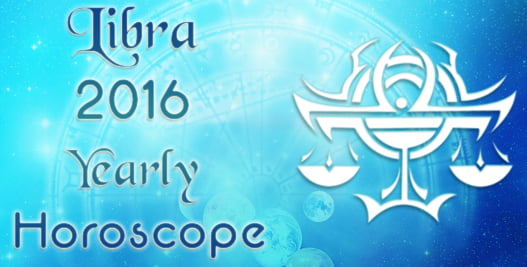 The most common interpretation for Libra Horoscope aspects in 2016 relates to financial concerns caused by either debts or limited shared resources.

Debts are an issue, and it is not uncommon to borrow a large sum of money during the year for an expensive purchase such as a car or house. But it is more likely that you will feel pressured to pay off your debts, both existing loans and any new ones you acquire. Some Libra force themselves to limit expenditures by refusing to spend any more money until they pay off all debts. Others, who have refused to face financial reality in the past (allowing their debts to reach the credit limits), are now forced by their circumstances to limit spending. They have exhausted all their options. Regardless of whether you are working hard to finish paying off your debts or just reaching your debt peak, you will probably feel pressured to pay your bills.

The aspects imply limited shared resources; consequently, you may receive less money from others. If you normally share finances with someone else or receive money for other reasons, this can be a year when these other forms of income (outside of your own earning power) decrease. If you are married or have a roommate, he or she may not be fully employed for part or all of the year, thereby earning less income than usual. On the other hand, he or she may be fully employed, but hesitate to share funds, instead spending whatever money is available on either worthy or unworthy causes, agreed upon or not. In any case, the amount of money shared or earned by your partner can decrease for one reason or another.

For example, a young housewife with this placement was having trouble stretching her husband’s paycheck to meet the bills. They lived frugally, but still there was not enough to go around. He was due for a raise and they hoped everything would work out, but just as he received the raise, they were forced by circumstances to buy a new car. The new car payment took up the entire raise plus ten dollars extra a month, so there was even less money to go around that year.

If you normally depend on others (possibly your parents or some other relative) for financial gifts, you may receive less money this year than you have in years past. It is probably time you grew more financially independent and became responsible for your own debts. The restriction on shared resources also includes situations associated with wills, inheritances, and occasionally even bank loans. Do not expect someone to give you money unless you expect yearlong delays. Saturn in the 8th is not a reflection of the amount of money you yourself earn. That is a separate matter seen through the other houses, most notably the 2nd. Your earnings may be very good this year, but with Saturn in the 8th you would still tend to have some of the above mentioned problems with the money you receive from others.

Libra Horoscope for 2016 shows that sexual issues are possible, but generally they are rare in comparison to the emphasis on financial considerations. Sexual limitations may include abstinence, impotence or frigidity in extreme cases, or a general lack of fulfillment. Critical judgments of self or others can inhibit sexual performance.

Issues outside of the bedroom, such as power, dominance, and restriction, might affect sexual interchanges. Limitations occur for a variety of reasons, but the partner’s absence, your or your partner’s ill health, or an inability to function well are most notable. For example, if your wife is pregnant with twins, her desire may wane, assuming you could master the logistics to begin with.

For a few, sex will be less enjoyable this year, especially if it is rushed, occurring in inconvenient locations, or under stressful circumstances. This is especially true for those who are involved in an extramarital affair. If you cannot fully relate to your partner, you may view the act more as a responsibility than a pleasure. Moral dilemmas in which you feel pulled between sexual attractions and the criticisms of others are possible. If you are a closet homosexual, you may feel pulled between a strong (and obvious to others) attraction to someone you see routinely and the desire to keep your life-style and feelings private.

You are more aware of the dark side of human nature. You see evidence of it manifesting both in others and in your own personality. Normally you see individuals as a blend of both good and bad, black and white with variations of gray.

But during this year, the separation seems more apparent and the grays tend to fade away. Black and white, good and evil, become all-or-nothing traits, different sides of one personality manifesting themselves at different times. The contrast tends to be stark. Situations you are involved in during the year, conflicts and stress cause the more negative traits to manifest. For example, if you are involved in a love-hate relationship, you will probably see both the best and the worst you and your lover have to offer. The stress of the situation, coupled with conflicting emotions, will tend to foster both strongly positive and strongly negative relating patterns.

Disputes over a will or an inheritance can also magnify the split. You may think you know your relatives until either you or they contest a will. In the most extreme cases, you might be harassed by someone who is sadistic or at least has a sadistic side to his or her personality. Personal vendettas are rare, but not unheard of.

Use this year to eliminate power structures which are controlling you. Develop psychological self-control. Gain insight into your own personal contributions to your situation. Work toward self-mastery.

Form June, there will be a need for increased peace and security in your home. It is important to feel rooted and protected physically, emotionally, and spiritually by the home environment. Many individuals choose to begin a beautification program to make their living quarters more comfortable. Although projects may be expensive, there is usually a minimum of disruption. Improvements are not necessitated by a need to make repairs (more likely with Saturn), or the need to make major changes in the structure of the house (more likely with Pluto). Projects tend to be minor, and generally the domestic situation is not disrupted by the improvements. Renovations or additions are not as likely as changing the decor with paint, wallpaper, and new furniture. The object here is to enhance the surroundings both inside and outside of the home, not to redo the entire house from scratch. Outside improvements include landscaping the grounds or creating a small garden for meditation. Individuals having this placement wish to create an environment which not only suits the physical needs and comforts the soul, but pleases the eye.

Security is also important; depending on the individual’s age, issues can relate to present or future needs. Domestic security is the immediate issue, and you may be striving to purchase a home or secure your position in the present one. Heavy aspects to Jupiter in the 4th can indicate other influences which might support or threaten your homelife. For example, after one man’s parents died, he inherited the family home and for the first time owned a piece of property. As he settled into his new home and began to redecorate the interior, his future bride informed him that she did not care for the house and wished to live elsewhere. This man felt the need to balance his commitment to his fiancee with his desire for a sense of rootedness. The home had become very important to him, since for the first time in his life he was working steadily toward completing a major project without abandoning his goal prematurely. He needed to work during the year to balance his needs and the needs of his fiancee with the desire for rootedness.

Married individuals with this placement who are in the process of separating need to find and secure a home for the future. If Jupiter is very stressed, this may be a complicated task.

For older individuals, issues concerning retirement and pension plans are important. The emphasis is on IRAs, mutual funds and retirement packages, but usually security issues do not apply to funds alone since included also is a concern for the home. You may pay off your mortgage, refinance your loan at a lower rate or purchase an insurance policy which will cover your payments should you become disabled or unemployed. This is the time to make changes in your home and in your financial planning which will insure the stability of your domestic situation both now and in the future.

Occasionally may be an increase in the number of people living in your home during the year. You expand your home by taking in another person, either a boarder, roommate, foreign exchange student or relative.

Generally, the addition does not indicate an increase in responsibility. The other person is able to meet his or her own needs and contribute to household chores and expenses. It is likely you will enjoy his or her presence although it can cost you extra money to have this person around.

Domestic responsibilities tend to lessen as individuals gain independence from other family members. Children may enter school or go away to college. If you were saddled with a lot of responsibility during the previous year because either of your parents or some other family member was ill, it is likely that his or her health or situation will improve at this time and your duties will decrease. Parents who are very elderly could be placed in a nursing home, or outside assistance may be brought in to help. In cases where the death of a disabled person is imminent and could be considered a blessing, this is the reason why responsibilities lessen at this time. For one reason or another, the difficulty or demand for extra attention is no longer evident.

Feelings run high and emotional swings are likely. Excessive responses are the norm and both highs and lows are evident. You could seek to suppress emotional responses, fearing the strength of your feelings and the loss of control. Many times there is a situation during the year which heightens the emotional nature and forces you to deal with the adequacy or inadequacy of your responses and those of others.