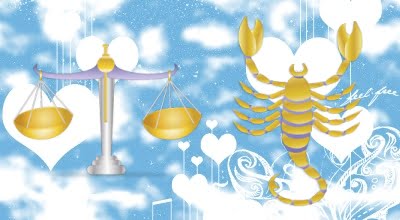 Libra and Scorpio form a 2-12 Sun Sign Pattern, which means many things, as you will read in the back of this book, but one of the most important of these is Karma’s decree to the Libran that there is a mystery to be absorbed from the Scorpion … and there is, to be sure. More than one mystery.

The roles of student-teacher will soon emerge, which is only fair. After all, Libra, you play the same instructor role toward Virgo as Scorpio plays toward you, so it all evens out around the wheel. Since Libra represents the twelfth house of the karmic past to Scorpio, the latter will be unusually tolerant of Libra faults and failings, the differences in their individual personalities and dispositions. Scorpio has already passed through Libra’s Venus vibration (probably quite recently, relatively speaking) and therefore possesses a strange comprehension of its pitfalls, along with a wistful memory of its joys, yet would prefer not to return there, having moved on to bigger and better problems under the Pluto essence.

“I feel I have something to learn from this person,” muses Libra, when ex-posed to Scorpio’s unrelenting gaze. “I somehow understand this person better than anyone else ever will,” thinks the Eagle, after studying the Libran carefully-

And so they approach each other, tentatively at first, but with a certain degree of fascination – for the unknown, on the part of Libra – for the known and vulnerable on the part of Scorpio.

This is not, strictly speaking, the same teacher-student vibration of the 4-10 Sun Sign Patterns. Yet the Scorpion has a subconscious recall from some misty past incarnation, of the dreadful disappointments that can follow on the heels of Libra optimism, justice and fairness, and so is sympathetic to Libra’s tendency to try to see the positive side of all questions – and is often willing to give a helping hand to this Sun Sign still beset with Venus seductions, this soul experiencing the struggle of trying to balance the Libra Scales.

Libra, keenly sensing the need to benefit from Scorpio’s wisdom, is anxious to plumb Pluto’s secrets. But Libra is a mental Air Sign, and will not accept every word from Scorpio without a few healthy arguments (Libra calls them discussions) and an occasional mental chess game with teacher.

Whether the relationship is that of friends, parent and child, business associates, mates or lovers, Scorpio soon discovers that Libra is a charmer, pleasant, bright and soothing to be around – on Mondays, Wednesdays and Fridays. On Tuesdays, Thursdays and Saturdays Libra can be a study in contrariness. Sun-days depend.

Most Librans do like to talk, especially the females of the Sun Sign. There are also some Libra men who seem shy and reticent, but challenge their sharp wits with an argument or a one-sided statement – and they’ll lose their shyness and talk your head off trying to convince you that there are two sides to every question, every problem, every situation. These quiet, untalkative Librans are only remaining silent while they perform their mental convolutions, ready to whip them out to win a victory in the next argument.

Scorpios have decided likes and dislikes. Their preferences are never fuzzy, their opinions often set – as if in cement. The natural adaptability of the Scorpio Water element seldom wins out over the Fixity of the Scorpion Sun Sign nature. Of the three Water Signs, Pisces is far more adaptable than either Scorpio or Cancer, since Pisces is a Mutable Sign, Cancer a Cardinal Sign, and Scorpio an extremely Fixed Sign. Studying such nuances, and recognizing them, helps a lot.

These set opinions, these pronounced likes and dislikes of Scorpio, can cause tension when they offend Libra’s innate sense of justice and fair play, and Libra voices disapproval. When this happens, Scorpio will temporarily forget his or her natural tolerance for Libra, and become either mildly frustrated or even secretly bitter over what the Scorp interprets as permissive, lazy thinking – which is a mistake. Libra may be physically lazy periodically, usually following a long surge of incredible vitality (it takes these ups and downs to keep the Libra scales evenly balanced), but there’s nothing lazy about the Libra mind. How can a mind grow lazy, with all that hyper-activity or weighing back and forth every decision, from whether it’s healthier to eat carob ice cream than to eat none, to whether to vote Democrat or Republican or not vote at all – or to form a new political party? Such continual brain exercise as Libra receives from the trauma of daily and hourly decision making, keeps his or her mental muscles rippling and flexible. Sorry, Scorpio, but calling Libra mentally lazy is an unfair judgment. In the area of permissive thinking, however, you have pretty good grounds for complaint.

A Libran can be amazing in his or her ability to sustain an optimistic “to-morrow will be better” attitude in the face of setbacks, letdowns and catastrophes, which is truly a lovely thing to observe at close hand (or even at a distance), but after a while it begins to chafe. The more cautious, perceptive Scorpion asks himself (or herself) if Libra can possibly be sincere. (Libra is, yes, ever-so-sincere.) How can any human, wonders the Scorp, so eternally continue to see only the good side of everything? Wait. Eventually Libra’s Scales will tip and they’ll be looking on the dark side. If you don’t believe me, just say anything at all strongly affirmative to Libra (very aggressively) and watch him (or her) take the opposite stand. Or the middle road. Sometimes, they take both sides at once. Approach a Libran, point your finger and say loudly, “You’re a Libran, and that means you like to argue about everything, right?” “Well .. yes and no,” answers Libra.

I love to have Libra people approach me to discuss my first book, Sun Signs, and spend a half-hour or so telling me why they don’t think the Libra chapter fits them. When they’re all through, I say sweetly, “But you just proved you’re a Libran by arguing about every word I wrote.” For a moment, they’re silent. Then Libra will continue, “I didn’t argue about every word. There are some things in it that fit me perfectly.” “Which ones?” I ask. Then Libra spends another half-hour telling me how accurate the description of the Sun Sign was. Afterward, I feel kind of split-down-the-middle, which is the way Librans always leave you feeling. But they’re fair!

Scorpios can, surprisingly, rather smoothly handle Librans who are temporarily behaving like cranky crocodiles. It’s the 2-12 vibration between them. Scorpio seems to instinctively sense that Libra needs encouragement, that when Libra finds the right outlet for either creative or intellectual expression, he or she will become a most cooperative person – friendly, adaptable and willing to compromise in order to maintain harmony and avoid tension. A little extra patience is worth it to Scorpio to achieve such a desirable goal. A Scorpion always has an excellent reason for every tactic, a hidden motive behind every strategy or course of action in human intercourse. Of course, Scorpio should be warned that the Libra willingness to be friendly, adaptable and cooperative may be, on occasion, merely a weapon to gain what Libra wants, however genuine these virtues are most of the time. Librans are incredibly adept at manipulating situations to their own private ends, with apparent harmless intention and a lack of aggressive attitude, while projecting oozing oodles of charm – so adept that unsuspecting souls are often fooled into doing it Libra’s way (oh, that persuasive voice, that heavenly smile!) without fully realizing how they’ve been programmed to goose-step in the direction Libra had in mind all along.

Scorpio, however, is far from “an unsuspecting soul.” Scorpio invented the word “suspicious.” You don’t fool one easily. Governed by the powerfully perceptive Pluto, most Eagles can see straight through the silk and satin of Libra’s wiles and seductions. Libra can trick Scorpio only once, if that often. After the first experience, Scorpio will have memorized the Venus strategy of sweet cajoling, and will be armoured against the allurement of such wheedling next time.

LIBRA: (all smiles and dimples) That’s a truly excellent letter you wrote, and it reads very smoothly – but do you think it really expresses what you want to say?
SCORPIO: Yes. It expresses exactly what I want to say, which is why I intend to mail it. I’m glad you liked it. Do you have a stamp?

Scorpios are no pushovers for Libra charm. They can be, when they choose, equally as subtle in the strategies of achieving their objectives as the airy, mentally quick and highly intelligent Librans. And far more persistent. Inwardly, the Eagle never admits defeat. But Scorpios are sensitive, and can be quietly hurt when Libra is oblivious to a need. Libra is not a sign noted for in-depth analyzing of human nature. They’re better at analyzing stock market reports, legal briefs, color charts, art masterpieces and political polls. Libra may be sweetly sympathetic, for example, to Scorpio’s nervousness around kangaroos. But it may not occur to Libra to ask why. Scorpio would like to be asked, even needs to be asked why. He (or she) may have waited a long, lonely time for someone to care enough to really want to hear the story about that scary trip to the zoo as a child. Speaking of childhood, here’s an unpublished Mother Goose rhyme she wrote for the Venus- and Pluto-ruled, while she was shaking out her feathers one day: Water and air, water and air .. may only reach harmony …. when Libra treads carefully .. and Scorpio is fair.