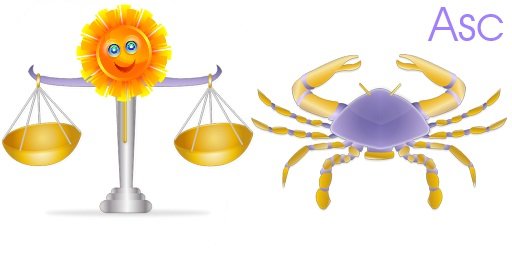 Here’s the obliging nurturer of the zodiac. At their best, these people are wonderfully willing workers, polite and productive, naturally inclined toward rewarding and lucrative careers or ventures involving real estate. They’re effective managers whose mothering instincts motivate and equip them to attend to the needs of their employees without patronizing or belittling them. They’re also superb deal-makers because they cut all the meat off the bone: The penurious quality of Cancer serves Librans well in helping them to sometimes end up with more than their fair share. They’ll generously house and feed their friends as a social gift or just to be helpful, but when it comes to business—you’ll need to keep a firm eye on their cagey Cancer stinginess. These Librans can’t bear to pay too much for anything!

The potential risk here is that when the obliging Libra ego, so eager to please others and averse to being alone, projects through an emotional, nostalgic, wrapped-up-in-my-feelings Cancer personality, there’s a tendency to depend too much on others for validation and, also, a serious lack of emotional self-sustenance. At work, in those previously mentioned management positions, these Librans expect and facilitate diligent effort from every member of the team. But they sometimes unwittingly undermine their authority by becoming too friendly and cozy with their employees when they need to be the authority figure. And they sometimes tolerate too much unacceptable behavior. They might come off as emotionally needy, requiring too much support from their partners, while, on the other hand, offering support to people whose bad habits and lack of motivation require tough love rather than enabling. They have a hard time saying “no,” and they justify their lack of resolve with excuses like “just for old time’s sake” or “because it’s family.” And perhaps most dangerous of all, they might even allow their contributions to go unrecognized and uncompensated. It’s extremely important that they see themselves and their circumstances objectively. Enhanced objectivity and self-awareness helps all of us to keep ourselves and our experience in context. But the Libra/Cancer combination is more subjective than average, and sometimes it’s impossible for them to see beyond their emotions.