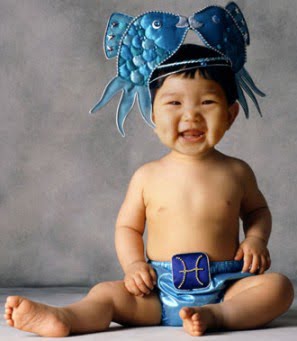 Pisces baby lives in a dream world, where there are elves, fairies and magic trees. He is somewhat different from the other babies, he will never shout, scream or throw tantrums for getting things done. He has a better tactic up his sleeve; he will charm you into agreeing for whatever he wants. Even after he grows up, the childish, wistful aspect of his personality will never go away. Make-believe world will always appeal to him. Whenever you are doing something important, just create a small little world around him.

Use some soft toys, balloons, dolls, etc, to do that and you will never even hear a word from him. A Piscean baby has a very sharp sixth sense and intuition. This particular personality trait may catch you off-balance quite a number of times. You will face a great amount of difficulty to make him adhere to schedules and routines. He will not eat because it is time for dinner or sleep because it is 11:00 pm. He wants to eat when he’s hungry, sleep when he’s tired and play when something attracts his fancy.

It will be better if you adjust yourself to his schedule. Infact, your Pisces child will teach you not to be a slave of the clock. For him, it is just a piece of machinery, which should never dictate how you live your life. He is not too confident about his abilities and will have to be reassured time and again. Don’t forget to give him lots of attention and admiration. Then, every now and then, he will want to be left alone. It is better to leave him alone in such silent spells and he will come back in some time, though it may turn out be the time for dinner rather than lunch.

Conventions and patterns do not gel with the characteristics profile of Piscean children and they find it very difficult to stick to them. So, their teachers might find it a little difficult to fit in them in a particular mould. They will hold an interest in various art forms, music, dance and anything that’s creative. A Piscean child is quite good with words and may become involved in poetry or story telling. Handling responsibilities will hardly be his cup of tea and you will have to teach him this. The fish is also extremely sensitive and harsh words are enough to being tears in his eyes.

He will have a deep wisdom and will mostly prefer spending time with adults, rather than kids. People often accuse a March-born kid of lying, but this is not the case. He does not have a malicious bone in his body. It’s just that he has his own vision of the world and the realities are too harsh for him to bear. So, he adds his own color and warmth to the situation to make it somewhat bearable. He needs your sympathetic attitude or he may draw into an unspoken, glum depression. What a Piscean baby sees and hears, no other person in the world can even imagine. 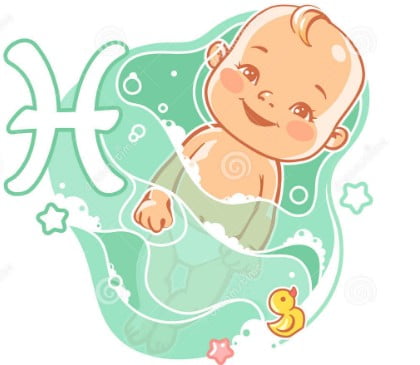 Whenever he starts imagining, encourage him to capture it in the form of paintings, poems or other forms of art. Then, gently goad him to face the brutal realities of life. Slowly, he will learn to accept the world as it is. Don’t stifle his fantasies; he needs to see them in order to build up the strength to face the facts of life. After he has refreshed his own soul, he will be able to do the same for others too. You can always learn from his empathy, patience, imagination and calmness. About that silver stars he follows, just wait and it is possible that one day, he brings it home and then, you can wish on it too!

Your Pisces child will have a wonderfully creative imagination that enhances her life.

Don’t be surprised if you find your little one staring off into space a lot. There’s just so much going on in that mind of hers. It’s a whirlpool of feelings and impressions and she also has her own perception of the world to ponder.

Pisces children are incredibly tender and kind, so they need extra affection from you. Your little Pisces may want to be held non-stop as a baby and will still need plenty of cuddles, kisses and encouragement as she gets older.

Pisces children are often more in touch with their instincts than with logic, and more interested in their dreams or fantasies than in “real life”. Your little one will need you to help keep her feet on the ground because she will have grand ideas of the way life could and should be, which unfortunately just won’t live up to reality.

Heaven has blessed you with one of its most special little Angels. These are the Water Babies of the Cosmos, so emotional, sensitive and intuitive. Of all the Water signs, these are the ones that, just like their symbols the Fish, swim in water all their lives. These are feeling, emotional Angels, who feel and sense everything at such a deep level. They are highly intuitive little Angels and very, very perspective, to the point of being psychic, for these little Angels were born with the gift of Second Sight and a Sixth Sense. These are the dreamers of the zodiac, with vivid and rich imaginations. Don’t ever try and make this little Water Baby come down to earth, or toughen up. These are heaven’s little Angels, here to bring colour and fantasy into the world. They will grow up to be very caring people and whether they take their creativity and imagination in to the world of the Arts, Entertainment or the Caring, Helping or Counselling fields, they’ll enrich anyone who is lucky enough to come into their life.