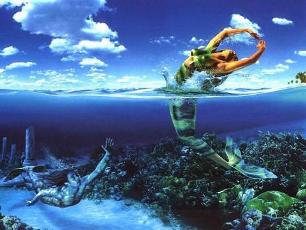 In many fairy tales there is a peculiar and enchanting figure, sometimes called an ondine or melusine, sometimes called a mermaid, who lives in the depths of the sea or a vast lake, and falls in love with a mortal man. This legend may also be seen in the legend of the Swan Prince – although here the creature from the ‘other realm’ bears feathers rather than scales. And these ancient stories, in all their various forms, have the same basic theme: the union of a mortal, an ordinary flesh-and-blood human, with something from another level of reality. The meeting is fraught with difficulties. There are always conditions attached. And it usually ends in disaster or difficulty, not because it is doomed from the start, but because of the ineptitude of the mortal who attempts to impose his own laws or values on his mysterious, other-worldly partner.

Usually the melusine agrees to live on dry land, and inhabit a mortal body, so long as her mate observes one special condition. He must not ask her a particular question, or look in a particular box, or enter a particular room at a particular time. In other words, there must be respect for the mysteries of this other realm. And the mortal, driven by ordinary human curiosity and lack of respect for this magical dimension, inevitably asks the question or opens the box. So the bond is broken, the melusine disappears into the depths again, and he is left to sorrow. Or, sometimes, she drags him down with her, drowning him in her embrace.

The motif, which we can find in several myths and fairy tales, is am story which has special meaning for Pisces. As we have seen, Pisces is the last sign, the completion of the cycle. Every sign leaves its trace in Pisces; there is not so much a particular Piscean dilemma as that Pisces embodies the human dilemma. In this last of the zodiacal signs is represented all of man’s helplessness, his longings, his dreams, his needs, his powerlessness in the face of the universe, his delusions of grandeur, his longing for love, his sense of a mystery or a divine source which he strives for, yet cannot wholly reach without great sacrifice.

You might say that in every Pisces, symbolized by the two fishes trying to swim in opposite directions yet bound together by a golden cord, there is this dilemma of the meeting of two dimensions. There is the ordinary mortal side, which is used to facts and realities of a tangible kind. Eat, sleep, make love, and die – or bread and circuses, as the Romans used to say. And there is also a melusine – or, in the case of Pisces women, the masculine equivalent – which inhabits the dark depths, and which occasionally flashes its tail above the water, catching the sunlight, entrancing the mortal on the shore. How this meeting is dealt with is the story of each Piscean life. Some Pisceans simply follow the mermaid down, forgetting that human lungs cannot survive underwater. Here we have the derelicts of humanity, the lines of the junkies and the chronic alcoholics and the hopeless, the waster, the despairing, the abject. It is these whom Christ, in Christian mythology, declared blessed, for they have sacrificed everything of ordinary life and for their suffering have earned the key to another realm.

here that we can see the genius of men such as Einstein – where the melusine, the glimpse of other realms and of a universe barely comprehensible to the ordinary mind in its majesty and infinity – is translated through the human brain, offering to the world a charting of the unknown waters.

Obviously, not every Piscean is an Einstein or a drunkard. But perhaps the task of every Piscean is to come to terms in some way with the transpersonal realm, and to have the courage to be its mouthpiece. Here we find the poets and musicians, the great actors and playwrights, the visionaries and mystics who attempt to bring to ordinary life a glimpse of something else. This can be through a work of art, or it can exist in the humblest expressions of human love.

It is not easy, perhaps, to be born as Pisces. Many Pisceans simply cannot accept the size of the challenge. And, after all, who can blame them? It is not easy to make peace with melusine; and our education does not help us, since it tends to emphasize that anybody with the secret life of the Pisces must be at best a lazy daydreamer, and at worst emotionally disturbed. The fairy tale world in which many Pisces children live is criticized, bludgeoned, mocked or argued out of them very early. And it’s important to remember here that Pisces is a mutable – that is, a changeable – sign, malleable, easily influenced, often hungry to please. Pisces is more easily distorted, more easily pressured by a hostile environment, than any other sign. So the melusine calls unheard from the depths of the soul, and the average Piscean disguises himself from himself by a rationalistic attitude toward life.

Another important mythological motif that tells us something about the Fish is the Christian myth itself. When I use the word ‘myth’ here I do not mean to imply something true or untrue, but mean it in the sense that all myths are apertures into another world. If one is a Christian, then the New Testament is truth while the religious symbols of other faiths are myth; if one is either non-Christian or open-minded, one can see that all myths describe God. So let’s look at the Christian myth.

The Christian era is sometimes known as the Age of Pisces. Without going into lengthy explanations about precessions of the equinoxes and other astronomical phenomena, let’s just say that about every two thousand years a new zodiacal sign colours man’s history and culture. You can see the traces of this sign at work particularly in the religious symbols that emerge during the time it is in power. The Fish is one of the great symbols of Christianity; and in this symbol can be found many important themes that pertain to Pisces, both in this broad way and in the individual life of the person born under the sign.

Firstly, there is the aspiration. Before the coming of Christianity, man and God were two different things; there could be communication between them, there could be enmity or friendship; but man was not like God and God was not like man, and never the twain could meet. But one of the essential meanings of the Christian myth is that God incarnates as man: that there is a halfway point, an intermediary, a bridging of the two worlds. We are back to our friend the melusine here. But, instead of melusine, read soul or spirit. So, we can, if we want to consider the religious aspect of Pisces, say that there is a strong awareness in many Pisceans, especially the more mystical ones, of themselves – and the whole of mankind – being some kind of halfway house between animal and divine.

You can imagine that this creates problems. Being aware of two dimensions like this is pretty confusing, especially when the one tends to pop up when the other should be operating. No wonder Pisces is said to be confused a lot of the time.

Second to the aspiration is the urge towards self-sacrifice. Now this can be of the noblest kind, and one of the characteristic renditions of this can be found in the lives of the Saints. These figures – whether one believes in Saints or not – are in a sense the epitome of this side of Pisces. Everything devoted to the ideal – whether it is God, a country, a people, the poor, the suffering, or whatever. Pisces may often be found searching desperately for a cause to which he can devote himself, even sacrifice himself. It is an ecstasy which the other signs want no part of, since they all still have left some shred of a personal sense of their own ‘I’ness. Pisces doesn’t. It’s the completion of the cycle, the end. And there’s a very strong tendency to want to give up everything, offer it up, disintegrate, disappear.

Compassion and love of an impersonal, unbiased kind are also Piscean virtues extolled in this last era. Love thy neighbour as thyself, turn the other cheek – these are Piscean aspirations. Of course you have to remember that there’s another fish to the pair, too. But much of the history of religion in the last two thousand years has forgotten about that second fish. It’s locked down in the basement, and popularly referred to as the Devil.

You get the picture. We can look objectively at the myths of the Greeks, Romans, Egyptians, or whomever, and see how some of these mythical heroes and motifs fit particular zodiac signs. If we can strip ourselves of our prejudices, and remember that every age has considered its teaching the only true one, we can perceive that in the figure of Christ we have a model of Pisces – as the sign would like to be. And in the figure of the Devil, we have the dark fish, the other fish, which we must now consider.