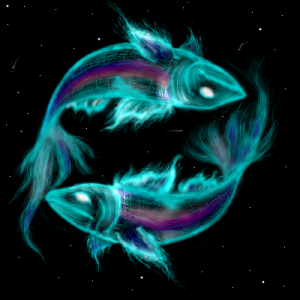 You might know, of course, that nothing is all light. With all those beautiful aspirations and longings for purity, devotion and goodness, mercy, compassion and self-sacrifice, there’s bound to be a pretty big wallop of a shadow downstairs. It’s always like that, of course. And the basic law of life – that everything comes in opposites – is nowhere truer than of the sign of Pisces.

Remember that we said Pisces knew no limitations? This is certainly true of his aspiration. Nothing less than union with the divine, the source of life, will suit. Whether this is achieved through religious longing, creative expression, or heroin is not so important as the experience itself. Right? Right for Pisces, at any rate. And the dark fish knows no limits either. His name is Power.

In ordinary situations, Pisces tends to be the victim. We can meet this figure in many Pisceans – they are the ones who are taken advantaged of, used, bled white for money and sympathy, held in bondage through their sympathy, made to feel obligated through their tendency to feel guilty for everybody else’s sync. It is almost inevitably the Pisces who stays with the violent husband, nurses the schizophrenic wife, raises the retarded child, supports the ailing mother, gives up this, that or the other thing to help somebody else. It is sometimes very hard to tell whether these are the noblest or the silliest of human beings; and whether they are truly saints, or wield a tremendous power through making the other guy feel hopelessly obliged. Nobody has quite as much power as a martyr. Maybe it’s a little of both.

In The Iceman Cometh by Eugene O’Neill there is a character named Harry: an ordinary sort of man with the usual array of vices and virtues. And Harry has a wife who, although we don’t know whether Eugene O’Neill practised astrology, must surely be a Pisces. Harry’s wife forgives him for everything. No matter how abusive he is, no matter how badly he treats her, she never raises her voice in anger, or rebels, or shows a little bitchiness herself. She always, always forgives. And of course it makes Harry worse. If you make anybody feel guilty, then they will resent you, then they’re going to treat you even more badly the next time. So Harry’s treatment of his wife goes downhill, from bad to abominable. Soon he is beating her, bringing other women into the house, and other favorite pastimes of the Right Bastard. And Harry’s wife does the natural Piscean thing: she forgives. She understands. She has compassion. She makes Harry feel so guilty, so terrible, that of course at the end he has to kill her. He simply has to. That’s why saints are always martyred. Saints they may be; but they make the rest of us feel blacker. And anyone who poses as a saint is shirking his share of common evil, and reaps it triplefold.

There is an interesting moral in Harry’s story about Pisces. For one thing, it shows how much power this ‘powerless’ sign can wield. For another thing, it shows how much power Pisces often wants. Outward passivity is a dangerous animal, since the will has to go someplace. And every so often you see it break out, and encounter strange Pisceans like Attaturk and Julius Caesar, who, unlimited as always, must conquer the world.

Many Pisceans have this kind of secret fantasy. Feeling as though they are the most powerless of mortals, they secretly envision themselves as rulers over all. It’s understandable enough. It’s troublesome and even dangerous if it goes unnoticed and unchecked. Attaturk, when he took over the rulership of Turkey in 1930, massacred an entire nation of Armenians who stood in his path. This kind of universal emperor, who sees fit to wipe out masses of people, is the opposite extreme to the Christian eaten by the lion in the arena. Sometimes the roles reverse, and the lion is actually the Christian.

If a sensitive Pisces is brutalized enough – and they often are, for people tend to see in them the reflections of their own feared weaknesses and vulnerability – then he may turn to cruelty for an outlet. This is a perplexing quality in some Pisceans which is never discussed in textbooks, for the simple reason that it is too disturbing. Yet it is common enough, from the small example of the schoolchild who torments his fellows, or animals, to the large example of the psychotic. But what is this kind of cruelty? Once again, we must remember that Pisces represents not so much a type of person as a rendition of human nature. The Pisces is all of us. That’s why he’s so often the victim. It’s exaggerated; but it’s there. Watch the pattern of a Pisces’ life, and you will see the reflection of any man’s distorted, exaggerated, but a true mirror. It’s said that Pisceans make wonderful healers, priests, physicians, counselors. This is undoubtedly true, for they have the innate compassion and wisdom and insight. They can heal because they have been wounded, and because there isn’t much in human nature that they haven’t already glimpsed in themselves.

But a too passive Pisces is a dangerous creature. The dark fish is bound to break out sooner or later, either in a genuine psychosis, or in self-destruction – whether quick or the slow kind like drug addiction or alcoholism – or in subtle, unnoticed destruction of another, like Harry’s wife in The Iceman Cometh. It’s rarely overt; unless that Pisces has a more aggressive ascendant like Aries or Leo, or a strong Mars, it’s all under the surface, for Pisces is a genius at undercurrents.

There’s another side to the Pisces shadow, which is connected to the first. We can call this syndrome the Misunderstood Genius.

FRIEND TO PISCES: What are you doing lately? Haven’t seen you in a couple of years.
PISCES: Well, I’m working on a really good novel. I’ve just got the first twenty pages done, but I can envision the whole thing in my mind. It’s going to be the greatest literary work of the century. I always knew I had it in me to write a great novel.
FRIEND: But didn’t you have about three others started when I last saw you? I thought…
PISCES: (embarrassed and beginning to feel as though Friend is accusing him of something) Oh, those were only trial runs. This one is the real thing. I’d probably have it finished now, if it weren’t for that damned part-time job I’ve got, in the library. I get so tired that I can’t write at night.
FRIEND: How often do you work there?
PISCES: Oh, only a day a week. But, you know, there’s so much to do around the flat, and my reading. I mean, you can’t write a novel without reading other people’s work, and I watch TV a lot, and films, and…
FRIEND: (beginning not to believe) Well, good luck with it.
PISCES: (on the defensive) You don’t think I’ll finish it, do you? I suppose you think I have no talent. But I do, you know. Just wait. Nobody understands. I wrote a few pieces for magazines, but the editors are these typical fools, they only publish rubbish, they don’t know a good thing when they see it. Just wait. You’ll hear of me one day. Then you’ll be sorry.
FRIEND: Sure, man, I didn’t mean…. Well, anyway, good luck.

The Misunderstood Genius, often a Pisces or a Pisces ascendant, most emphatically doesn’t lack talent. What he lacks is realism. Pisces, with such a rich, abundant, limitless imagination, often bitterly resents the ordinary limitations of time and space. And those brilliant ideas that flash through his mind like the flash of a fish in the water, are often truly brilliant. What he lacks is staying power, discipline, continuity, and the ordinary respect for hard work and good craftsmanship that has propelled many a mediocre writer of far less ability into fame and fortune. Pisces often presents himself as the new Poet, the new Writer, the new Filmmaker, the new Prophet. One day….when the world understands him… But the world is so annoying sometimes. It expects him, HIM…to hustle like ordinary folk, and work ordinary jobs, pay ordinary rent bills and electricity bills and national health stamps and car insurance, when it should all be made easy, after all, if they only knew what talent he had, what he could do for the world… A familiar story, and a sad one. And the saddest part of all is that, often, the Pisces won’t be able to find the happy middle, the balance point between valuing his dreams and taking the time to craft them into shape. He simply becomes embittered, disillusioned, and gives up in disgust. So the visionary becomes the most prosaic and most cynical of men, and never writes a line again, or scorns the paintbox that lays in the attic gathering dust. And he can say to his grandchildren, ‘Yes, once I dreamt of being a painter…. But…but….something went wrong.’ What? The confrontation with reality, the meeting of the melusine with the mortal. Either extreme is failure: drowning underwater, or losing the dream because it’s exposed too soon, without faith.

Pisces is sometimes called the sign of self-undoing. And it is important to remember that it’s truly self-undoing with Pisces, never the undoing of others. Pisces often has such a wealth of talent and vision that he is one of the most blessed of men. Yet so often his life is a failure. And this is because of his shadow: his visions of self-aggrandisement are so often too large, much too immense to ever be fulfilled, so he’s doomed to self-disappointment and self-disgust. And his bitterness at life can erode him, because he feels betrayed by it. If he can begin to understand that he is it, that there isn’t any ‘world’ that is inimical to him, that he must simply understand both the divine and the mortal sides of himself and care for them both, then he’s truly unlimited. And what strange children marriage with a melusine can produce?