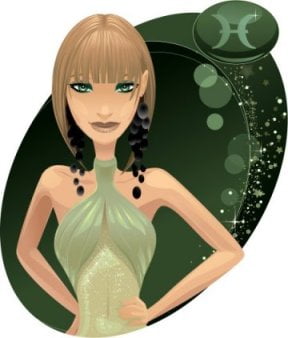 Many paeans have been written to the Pisces woman, for her mystery, her gentleness, her compassion, her elusive charm, her pregnant silences. And she may be, indeed, the archetypal feminine. The lovely, gracious princess of the fairy-tale castle, waiting for the suitor to rescue her and cherish and protect her, is modeled on Pisces. The Pisces woman has a unique ability to make a man feel terribly masculine, because she seems so often to need protecting, cherishing, and tenderness. Because she has such a changeable range and depth of feeling, she often gives the impression of being slightly unformed. It brings out the Pygmalion tendencies in any would-be artisans. Many men think they can shape her into what they choose. In part, it’s true. The qualities of devotion and gentleness and softness are in abundance in many Piscean women. But blank slate she’s not.

Like the Pisces man, she’s unfathomable, and possesses a soul which no one can ultimately reach. Although eager to please and rarely argumentative, she also has the gift of defence through submergence. Now you see her, now you don’t. She may physically disappear, usually with a lover; but more likely she’ll be physically present and simply psychologically disappear, gone to the underwater realms or to someone else in fantasy. It’s a very peculiar feeling when she’s gone. No one home.

Romanticism runs very high in the Pisces woman. She expects, and needs the poetry and tenderness and style that any fairy-tale princess merits. Starve her of these and you will drive her either to another lover or into herself, where she may transform into the martyr. Provide them, and your princess becomes a queen. Simple. Yet astonishingly difficult for many men, since Pisces, as a watery sign, seems to attract airy types who believe they can impress her with their sparkling intellects and long for the exhibitions of feeling she herself provides without realizing they must give in exchange.

And make no mistake, the Pisces woman, if she is disappointed, will not hesitate to deceive. Remember Elizabeth Taylor and Richard Burton? Being good to her isn’t enough. You must enter her dreams with her. Ignore them, patronize them, and you do so at your own risk. There is a strong theatrical element in the Pisces woman. She has a unique gift for getting herself into the most dreadful dilemmas and crisis which no one could possibly sort out, and then going about among her friends asking for advice which is never taken since her need to suffer and sacrifice is fed by the dilemma. A perplexing creature.

But meet her in later life, and all the compassion and wisdom which come from having seen the seamy side of just about everything yield a glow and a richness which is far more meaningful than the unshaped marble which Pygmalion sees in her late teens and early twenties. In this, the last of the signs, the Wise Woman emerges – with all the instinctual wisdom of her sex and all the human insights of her sign. Often she is almost mediumistic, preferring to shelter herself from life because this gift is so dubious and so difficult to bear. There is also more than a touch of the witch in Pisces; whether it is white or black depends on whether she has been badly bruised, and how badly. A Pisces woman gone wrong is a vampire, playing on the fantasy life of others, and draining their strength. Never underestimate her, because she may be inarticulate or reluctant to explain herself. Neptune is an enigmatic god; to love him is to love the ocean, for all its moods and changes, its anger and its peacefulness, its destruction and its beauty.