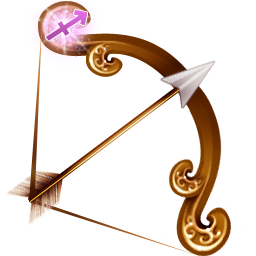 The first week on the job with a Sagittarius boss may leave you a little confused. You won’t know whether to laugh or cry. The gentleman obviously is a dope.

Or is he a genius? No, he’s neither-he’s clearly just a rude boor. At second glance, he has a touch of Don Quixote. But that couldn’t be. Not when he insults you with such relish. Still, he does flatter you with warm sin­cerity. Look at him-as awkward as a three-legged colt. No, actually he’s a graceful as a racehorse. What does he use, trick mirrors?

After the second week, you’ll uneasily decide to stay awhile and see what happens next. By now, you’re sure his mother spoiled him rotten. (Wrong. She didn’t have a chance. Did what he wanted to do.) Well, he’s somebody else’s problem, not yours. You’re leaving soon. She’s wel­come to the guy-his wife, that is. You’ve begun to feel sorry for her. (She sheds a few tears of self-pity herself at times, but she leads an exciting life.) You’re sure he secret­ly hates you. (He’s crazy about you. Just brutally honest when you make a mistake and painfully frank about your faults.) You think he’s going to promote you. (Not yet. He was just a little over-enthusiastic yesterday.) He invited you to lunch this morning. Now you can find out what he’s really like. (He cancelled it. He had forgotten he promised to speak at the ASPCA meeting.)

Two months later, both you and your psychiatrist feel it’s time to have a serious talk with him. You make up your mind: If he listens to your complaints about his erratic and puzzling actions, and he lets you know where you stand with him and the company, you’ll remain on the job. Otherwise you’ll quit. You will be firm. (Sorry. He just left for London.) All right, you can wait. So you’ll put your cards on the table when he returns, and tell him exactly how you feel. Give him a few days to get back into the swing of things. He looks a little tired. But you’re not going to let that impress you. By tomorrow he should be settled down enough to listen to reason. (You’ll have to call the airport instead. He’s leaving for Tokyo.) Now wait a minute! When is he going to light somewhere long enough for you to tell him what’s wrong with the way he treats you?

You really want an answer? Never. Your Sagittarius boss greases the ball bearings on his skates each morning and casually glides around town, building one gargantuan pro­motion after another. He certainly doesn’t want to stop long enough to hear you tell him his faults. He thinks he’s a pretty good apple. And he is, when you stop to think about it. Often he’s shy and helpless, and he needs to be understood.

But he keeps making those outrageous remarks to people. Why should he expect you to make excuses for him? Be­sides, a person can run out of excuses. (Call his wife. She keeps an alphabetical file of them.)

It’s not fair for him to keep smiling so cheerfully while he completely ignores what you’re saying and refuses to stick to a schedule. (Call his mother. She’d love to discuss it with you. Been waiting for years to find someone to sympathize with her.) What are you going to do? You simply have to do something.

You might try writing him a letter. Be sure it’s logical, with no phony emotion or one-sided arguments which make him the villain and you the righteous one. He’s the righteous one. If you make a fair point, hell consider it, and try to mend his ways, but he doesn’t want to spend six hours discussing it. In his opinion, there are more exciting adventures than listening to a recital of why he’s wrong. Besides, he’s not going to change anyway, so why waste his valuable time? Doesn’t he have any virtues at all? Well, yes, he does. Stop right there. Hang on to those, and forget the rest. His mother did. His wife does. Imitate their wisdom.

You could start by checking off a list of his good points. Right away you have to admit he’s seldom grumpy. Only once in a while, when somebody tries to dampen the fires of his enthusiasm, or when that stuffy accountant wants him to remember what he meant by those figures in his expense report for last month. Generally your Sagittarius boss is a rather happy-go-lucky, optimistic, cheerful fellow. That’s a plus. Now, what else? He’s pretty fair about sick leave and vacations. Another good point-he’s generous. Lots of bosses wouldn’t have understood when you lost all your money at the race track and had to borrow a month’s pay in advance. All he said was that you should have asked him which horse was going to win before you picked such obvious losers. But he gave you the advance, and said you could pay it back a few dollars a week later. Another check mark to his credit.

When you impulsively broke off your engagement and then regretted it deeply, he gave you the afternoon off so you could patch it up. Before you left, he happened to re­mark that he thought you were the most creative employee in the firm, and his obvious sincerity picked up your droopy heart. It gave you the courage to run right straight into someone’s arms with confidence, and the broken love affair was mended by nightfall. All right, so he’s a pretty great morale booster. Anything more?

You kind of admire him because he’s a crusader. He fights hard for what he believes is right, and it gives you a warm feeling to work for a man like that. It’s sort of exciting to be around someone who defends lost causes. He’s true to himself and his code, whatever it might be. That’s refreshing, isn’t it? Of course. Add another virtue.

But wait-what about that time you felt like a complete fool when you quoted the wrong figures at a sales meeting, and he led the laughter? Then he tried to fix it up by Saying, “That’s our boy, Tom, always throwing in a monkey wrench, but we love him anyway.” Don’t think about those things now. We’re dwelling on his good points, remember?

There’s no denying a Sagittarius boss can keep you a little up in the air. It’s hard to decide if he’s a saint or a sinner, or a little of each. The latter is probably closer to the truth. It takes a spell to get used to the Jupiter executive. He’s usualy a hail-fellow-well-met type, but the Sagittarius honesty and desire to keep everything above-board (and I mean everything) can be a shock to more sensitive natures. This man is so democratic you can’t help liking him. Still, his forthright manner and brutal frankness are sometimes hard to take. The Sagittarius em­ployer is sincere and friendly, and it’s obvious he isn’t the kind of man to hold a grudge or deliberately hurt any­one. He has very few inhibitions, and correcting your mis­takes definitely isn’t one of them. His criticism is done in the open, usually with a bare minimum of tact. Even the gentle archers never think of the wounds they’re inflicting when they cheerfully point out your flaws with deadly accuracy. True, the compliments and warm appreciation far outweigh the embarrassments, but those painful mo­ments stand out like sore thumbs. The December-born boss honestly believes that everyone wants to hear the truth. So he tells them. When he sees that he has offended, he can be the soul of contrite regret. Then he apologizes profusely and explains, frequently making it worse.

You’ll seldom know where he is at any given moment. Sagittarius can be anywhere at a minute’s notice. You’ll leam that he’s great at spotting phonies, fake salesmen with false pitches, clients with hidden motives and em­ployees with hidden vices. He’s not so clever about his love life. If he’s single, he may keep the office buzzing with his sentimental journeys and his active romantic adventures.

He probably has a host of friends of all shapes and de­scriptions. Bank presidents, important politicians, carnival people, newspaper reporters, ministers, doctors, lawyers, plumbers, carpenters, radio announcers, society dowagers, girl weight-lifters, gamblers, chorus girls, architects, bar­tenders and college professors all trip merrily over his welcome mat at all hours of the day or night. He sizes up people with his own ruler. If they measure up to his standards, he loyally defends them.

He gives orders with a rather regal air, but he’s so jovial about it, and there’s normally so much logic in his methods, it’s hard to take offense. Tactless and sometimes foolish, he nevertheless can call on his powerful intuition and lucky hunches to pull him out of almost any jam he gets himself into. (The romantic jams may be a little stickier, and harder for him to avoid.) He’s a much deeper thinker than his casual nature would lead you to believe, A Sagittarius boss can give any attorney a good argument and normally come out ahead. If he’s a typical Jupiter executive, he’s probably had an excellent education. Even if he hasn’t you’ll never guess, what with all the knowledge his inquisitive mind has picked up along the way.

He’s basically kind-hearted, but he’s also ambitious enough to step on a few toes occasionally. His memory sometimes fails in social situations, but rarely on facts. The archer can roll off the figures of his competitor’s gross business and forget the name of his own bookkeeper, who’s been with him for several years. Although he walks with a free, active stride, now and then with typical Sagittarian carelessness, he may step into the wastebasket or grind out his cigarette in the paper clips. But though his feet may stumble over the telephone cord, his mind rarely stumbles. His ideas are frequently unpopular, and aimed way over most people’s square heads, but nine out of ten of them pay off.

There arc some shy Sagittarius bosses, but under the timid surface, Jupiter will control the personality. Even the retiring type of archer shoots his arrows toward the sky, and keeps firm grip on the bow. The extroverted ones love to talk and expound their favorite theories (plus most of their private thoughts). The introverted ones can manage a pretty fair monologue, too, when the mood hits them, and what they have to say is usually interesting or in­structive. Your Sagittarius boss loves animals, bright lights, big plans, creative thinkers, good food and drink, travel, loyalty, change and freedom. He’s cool to dishonesty, cruelty, selfishness, keeping secrets from him, stinginess, pessimism, possessiveness and hypocrisy. He’s usually a lot of fun to work for, and he grows on you. You kind of get the feeling if you ever left him he would somehow lose his way, in spite of his egotism and independence. He won’t, but stick with him anyway. Tomorrow may always be a large question mark, but today will never be dull.