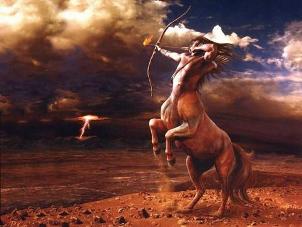 We’ve already talked quite a bit about Jupiter. Now let’s look at one of the myths connected with the centaur itself, because this gives us a key to the deeper meaning of Sagittarius.

The most famous centaur in ancient mythology was the centaur Chiron. He was a sort of King of Centaurs, half man and half horse, who lived with his own tribe among the wild hills and forests of Thrace. He was renowned because of his wisdom he had of life, of nature, of human behaviour. Wild and uncivilized as he was, all the kings of Greece gave him gifts and sent their young ones to Chiron for instruction, to prepare them for their training as princes. Chiron was the sage, the teacher, the philosopher. He was a mysterious figure, for from his union of man and beast came both a deep knowledge of man’s bestial origins, and a deep sadness at his own differentness. He was the alien, the outsider. He saw too much. One of the tales about Chiron relates that he received a wound from a poisoned arrow. But because of his wisdom, he had been granted the gift of immortality from the gods. So he couldn’t die. But neither could the wound heal, for the poison was from a deadly serpent.

So Chiron is the figure of the wounded healer, the sage who has an incurable injury yet who, because of his injury, understands far better the nature of pain. He becomes a healer through learning the secrets of herbs and magic. Yet he cannot heal himself.

In this noble and rather tragic figure of myth we can get a glimpse of the deepest meaning of Sagittarius. Not that this is a tragic sign; far from it, for nobody is as optimistic or ultimately positive in his viewpoint as the Sagittarian. Yet Chiron is also positive and optimistic. His wound is really the gap between the mortal, animal side of him and the immortal, god-like side. Let’s put it another way. Sagittarius with his intuition and his vision, is often in touch with many mysteries. He may have a deep sense, often unarticulated, that life is meaningful, that man is divine, that all things have a purpose and reach a lesson and offer growth. But the distance between his vision of light and the limitations of being human is a vast one. The reality of tangible, physical life is always imperfect, always in a way poisoned when compared to the vision he sees. In some strange way, this is Sagittarius’ true wound. He may try to avoid his wound, and throw himself into an endless running bout of escape from one excitement to another, striving always to avoid being alone with their thoughts. Lots of Sagittarians are those people who walk into their flats and instantly turn on both the TV and the radio and phone a friend, to avoid being alone with their thoughts. The Sagittarius who has the courage to face both his vision and the reality of his life is rare; but should he succeed, he is in truth the wounded healer, for he has learned compassion – a quality which the more naïve or blind Sagittarian utterly lacks. And he is also privy to one of the deepest secrets in life and of human beings – the duality of god and beast that underlies us all.