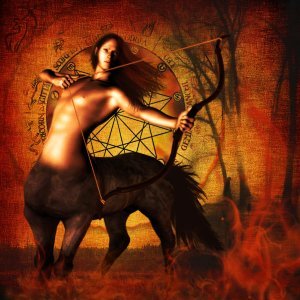 Sagittarius, too, has his dark side. There are a couple of typical manifestations of it. One of them we might call the Groupie. The scenario goes something like this:

FRIEND TO SAGITTARIAN: I hear you’ve been away on holiday. Did you go anywhere interesting?
SAGITTARIUS: Oh, Cannes, naturally, I just had to be there while the festival was on. It was really nice to see Stanley and Michael again.
FRIEND: Stanley and Michael?
SAGITTARIUS: Oh, yes, you don’t know them, do you? Kubrick and Cimino. The new film is really exceptional. We had a long talk about it over dinner.
FRIEND: I went to Southampton for a couple of weeks.
SAGITTARIUS: (with a profoundly bored look) Really. That’s interesting. I suppose you haven’t heard about the terms of Mick’s divorce?
FRIEND: Mick who?
SAGITTARIUS: Oh, never mind, you probably wouldn’t know. Well, I must be off, Ariana’s having a cocktail party tonight, and you know, well, I have the distinct feeling she fancies me, so…
(There is a coda to this scenario. It usually involves the friend not seeing the Sagittarian again, because he just doesn’t know the right people and isn’t up on what’s happening.)

Don’t think the groupie is limited to the shadow side of Sagittarian women. It’s not. There are as many hangers-on among the male sex in these fields as there are women; and the shadowy Sagittarian groupie of the male variety is no more averse to using a sexual relationship with a glamorous or well-known woman to get him into a position of advantage (no pun intended) than the female variety is. Having spent a couple of years working in the Hollywood recording business, I had ample opportunity to observe the groupie phenomenon. It’s observable in any profession where fame, glamour, colour and excitement are part of the show. And the really good groupies, the ones who managed to build a veritable career out of basking in somebody else’s limelight, were usually the Sagittarians.

The Sagittarian shadow is always the first to hear of a new club, a new restaurant, a new pub where the interesting people hang out. He’ll be the first to buy the record, read the book, see the film. And, my, does he talk about it. Part of the fun is you get to tell all your lesser-connected friends about the wonderful Olympian world they can’t enter because they don’t have, well ‘it’. And if you’re nobody going nowhere, this kind of Sagittarian has no time for you. If you’ve arrived but are on the decline, his time becomes less and less available. He uses shamelessly, but so charmingly that you’re often taken in by it; and somehow he makes you feel shabby and uninteresting if you haven’t been to the places he’s been and met the people he’s met. Oh, well, every shadow looks for power of one kind or another.

There’s another facet to the archer’s shadow. We might call it the Promiser. Now, the Promiser is a fairly well-known face of Sagittarius, and has a lot to do with the archer’s tendency to overextend himself. The Promiser simply promises. He promises to loan you money when you need it; he promises you that you can stay in his flat while he’s away; he promises to help you find a flat, paint your flat, dig your garden; he’s going to take you on a trip to India, Egypt, Madagascar, just as soon as summer comes; he’s going to ring you Saturday, this afternoon, next week; he’s having a party; he’s buying a new car. You name it, he’ll promise it. And with all these things, material or emotional or spiritual promises, he’s never, never able to come through, because he made that promise in a moment of wild enthusiasm both to convince himself and impress you. The reality’s different. Usually, you have to be burned at least twice by the Promiser before you spot his game. Then it’s like the boy who cried wolf. That’s when he drops you and finds more agreeable game.

Yet when you promise him something, you can be sure he’ll arrive on the day specified to collect. And my oh my, can he be sour if you haven’t got it ready at just that moment. A typical area where the Promiser shows his shadowy colours is with money. He’ll usually offer it generously – but not when you need it. When you need it, he’s usually broke. To be fair, many Sagittarians are as open-handed and generous themselves as you could possibly hope. But the shadow side isn’t. It’s downright tight. It sounds generous – that’s the talent of the Promiser, to sound good. When you need it, it isn’t there. But should you loan money to the Promiser, kiss it good-bye. If you ever try to collect, he forgets, he’s broke, he’s out of town, tomorrow, next week, next month. And should he loan it to you, he’ll never let you forget it – down to the last penny. There’s a curious unconscious mean streak that sometimes shows in Sagittarius – and I repeat, unconscious, because the true Sagittarian personality is magnanimous and extravagant and generous and totally unconcerned with material limitations. But it’s that damned shadow again. It has other ideas. And it takes away Sagittarius’ natural nobility and great heart, and show you a shrewd commercial nose that would shame any Capricorn into looking naïve.

The root of the Sagittarian shadow lies in his difficulty in adjusting to the limitations of reality. The archer who’s unsure of himself in the world, who’s afraid of failure, who can’t find sufficient maturity or discipline in himself to stick to something and finish it, often falls into the hands of his shadow because it’s far easier to ride on somebody else’s efforts. At bottom, this isn’t a real evil in Sagittarius; it comes from fear. The Sagittarian is often frightened of making any kind of commitment to the tangible world, because then he’d have to face not only the limitations of form but also the fact that his potential genius might not be quite so boundless and cosmic as he thinks it is. Jupiter, king of the gods, is a profligate deity who can’t bear limitation. That’s all very well for Jupiter, because he’s a god and can get away with it. The Sagittarian mortal can’t. Granted, he gets away with a lot more than just about any other sign, because he trusts in his luck and he’s optimistic; and because he believes in life; life often treats him kindly. But he isn’t a god. And it’s often hard for him to come to terms with his mortality and his ordinary humanness. Thus he becomes the groupie, hanging on to others’ achievements vicariously without daring to venture his own, or the promiser who needs desperately to sound wealthy, successful, important because it helps make him feel that way if others see him that way. It’s really like watching a child playing Caesar. Sagittarius can strut about and try desperately hard to live out his fantasies. It’s when he allows himself to be the gifted, imaginative, funny, intelligent, restless student of life that he really is that allows himself to be loved for his own sake, rather than for the sake of his fantasies.