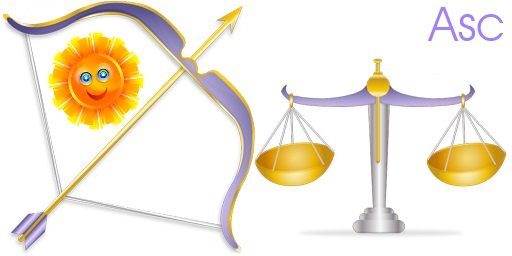 There’s rarely a better mix than the politician and the diplomat! These people have an obliging concern and limitless energy that are cornerstones to their character. They’re people-pleasing sweethearts who’ll openly share what’s on their mind—or if someone else wants to pose a topic, that’s fine, too! Likable Libra’s obliging consideration for others tends to curb Sagittarius’ temptation toward arrogance, and that’s just one way these two signs complement each other. The interest these Sagittarians show in people is obviously genuine, andin tandem with Sagittarius’ optimism and winning ways it leaves peoplespeaking well of them long after they’ve left the room. They’ve a knack for making good friends, and they often enjoy a close relationship with one or more of their siblings.

Sagittarians born in the wee hours are superb schoolteachers. They’re naturals at disseminating information, whether it’s in a control tower or a dispatch office. And they’re usually interested in journalism because they love to get the scoop on people. Their curiosity is insatiable! Sometimes meddling is a favorite pastime—it affords them the human interaction they crave. But these Sagittarians need to avoid letting their “I don’t want to be alone” Libra mentality and their “just keep tryin’ to please” demeanor lock them into relationships that aren’t supportive. It’s so easy for them to give people the benefit of the doubt that they end up accepting an empty “I’m sorry” for a legitimate apology that promises correction. They need to remember that actions speak louder than words, and that people who say “I’m sorry” but never make improvements are best left alone to their “I can’t help myself” routine. If these Sagittarians involve themselves in compatible relationships, they’ll stand in the winner’s circle with a bevy of friends and supporters applauding them.